"I would tell you he's probably faster, quicker, leaner and in better shape now than prior to the surgery," said Hilton Alexander, who is in his third offseason working with Sanu in Atlanta. "I would say he's way ahead of any doctor's knowledge or prediction where he would have been at this point. Way ahead of the curve."

That is ideal news for the Patriots, who traded a second-round pick for Sanu last October and would like to see that significant investment pay off. 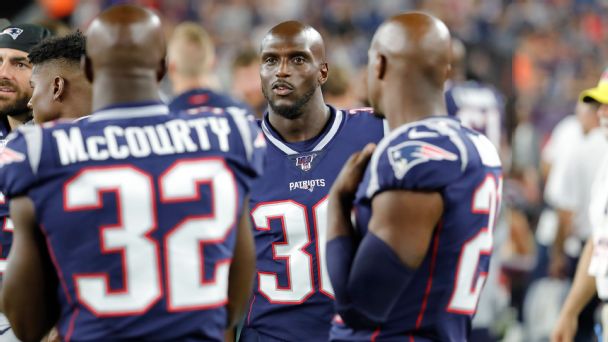 After this year's NFL draft, in which the Patriots didn't select a receiver in what analysts touted as one of the deepest and most talented classes in recent memory, coach Bill Belichick noted the second-round chip the club utilized to bring Sanu aboard.

So it's a match between a motivated team and a 30-year-old receiver entering his ninth NFL season.

"I think he knows he was a shell of himself toward the end of the season. He wasn't in the position where he could do the best he could and be able to offer that Mohamed Sanu that everybody has grown to love all those years in Cinci [2012-15] and Atlanta [2016-2018]," said Alexander, who played a few seasons in the NFL and five years ago started up his own Atlanta-based business to prepare players at all levels, called Route King.

"I know the fans didn't get a chance to see 100% Mohamed Sanu. I promise you, that is a huge chip on his shoulder now."

The high ankle sprain was an unfortunate turn, coming in Sanu's third game in New England, when he was filling in as a punt returner.

"That's one of the worst injuries you can get. It takes so much time to heal. Being that he's a receiver, the ability to cut is probably one of your greatest assets. It hinders your ability to be able to cut as precisely as you want to," Alexander said. "That's why he wasn't as dynamic as he wanted to be toward the end of the season."

It is also why last week was a significant milestone for Sanu's recovery, as he graduated to work on explosive movements, cutting, hill running and full-speed drills.

Alexander described Sanu's recovery as a steady progression, which began the day he returned from the hospital. That's when Alexander said his phone rang and Sanu told him it was time to get to work.

"In my mind, I'm saying to myself, 'What kind of work can we do? You're in the cast,'" Alexander relayed.

Sanu told Alexander that he wanted to catch 1,000 balls a day, so they started there, with a seated Sanu working on his core at the same time as footballs were fired in his direction. When the cast was replaced by a boot, Sanu did the catching drills standing. He snared footballs and HECOstix, the latter of which further focused on his hand-eye coordination.

Alexander's work with Sanu has been strictly football-based. It has come in addition to Sanu's time with physical therapist Matt Lopez (e.g. starting with a zero-gravity treadmill) and speed/performance coach Kyle Meadows.

Alexander said Sanu has also spent time talking with Tim Grover, who trained Michael Jordan and Kobe Bryant, among others.

Alexander points to that as a reflection of Sanu's overall hunger to bounce back from last season's injury. He said Sanu weighs 202 pounds (he's listed on the official roster at 210) and is "faster than he's ever been."

"He is training like he has something to prove, like this is Year 1 in this league and he has to make his name known," he said.