OAKLAND, Calif. -- The confetti was beginning to make its way from the ceiling to the floor, and Kevin Durant untucked his jersey, tapped his chest and pointed to his family in the crowd. The Oklahoma City Thunder's season was ending on the road in Game 7, as the Golden State Warriors held on for a 96-88 victory.

Durant found Dion Waiters first, and he hugged the guard at midcourt and patted him on the head. Durant then started shaking hands. He found Draymond Green, then Harrison Barnes, then over to Stephen Curry. As the party on the floor began, Thunder players headed for the tunnel, winding their way through the chaos. Durant was last, and he stopped for a moment on the far baseline.

The Thunder forward tried to will his team back in the game in the second half, as it weathered a barrage of 3s from Curry and Klay Thompson. Durant finished with 27 points, including seven straight that cut the lead to four with 1:40 left in the fourth. With the shot clock winding down, Curry drew a 3-point foul on Serge Ibaka, and the MVP sunk all three. Durant missed a pullup on the next possession, and the vision of an NBA Finals appearance by the Thunder began to disappear.

The disappointment of the final three games will sting for the entire summer -- especially if things don't go well starting July 1, when Durant officially becomes a free agent -- but the Thunder truly had a remarkable run.

Rewind to mid-February, when it felt like the entire season was unraveling. The Thunder lost eight of 12 coming out of the All-Star break, and the organization dealt with tragedy, as assistant coach Monty Williams' wife, Ingrid, was killed in a car accident. Then part-owner Aubrey McClendon died in a car crash. Then Waiters' brother was killed in Philadelphia.

The Thunder pressed forward and steadily improved as they adjusted under first-year coach Billy Donovan. They started defending more consistently and rolled ahead as the second-best offense in the league. But as a 55-win team that appeared a clear tier below the Spurs and Warriors, the perception was that the Thunder were nothing more than fodder for the true Western Conference elites.

That sentiment was affirmed when the Spurs blew the Thunder out by 32 points in Game 1 of the West semifinals. Everything that was wrong with the Thunder -- all the inconsistencies, the complacency, the lack of discipline and order -- came roaring to a head in that game. The Spurs embarrassed the Thunder, and whispers about Durant's future started growing into full voice.

Then the Thunder flipped the script. They stunned the Spurs in Game 2 and, after a split in OKC, did so a second time in Game 5. By Game 6, the Thunder looked like the superior team. They rolled into the Western finals against the Warriors full of confidence and belief and took Game 1 at Oracle. They lost by 27 in Game 2 but grabbed Games 3 and 4 to take a commanding lead.

With the Thunder losing in Game 7, the feeling is that this is some kind of collapse or choke. But two months ago, the thought that the Thunder would even be in this game seemed far-fetched. Tell any team that it could walk into Oracle for a Game 7 with a trip to the Finals on the line, and it would've taken it because that means one simple thing: You beat the mighty Warriors three times. 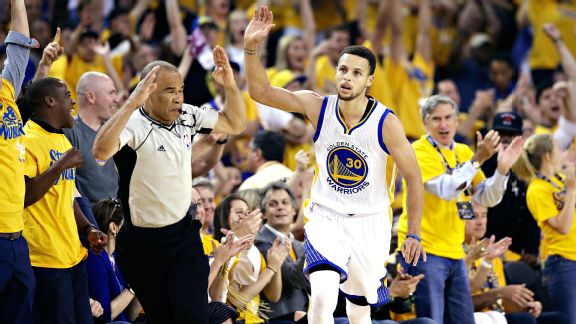 There was more growth by the Thunder in this postseason than at any point of the regular season. Steven Adams evolved into a beastly machine. Andre Roberson took his defense to another level while finding places to contribute offensively. Waiters stepped up at various times. Enes Kanter was vital in advancing past the Spurs. Both Durant and Westbrook elevated their games, especially on the defensive end. Donovan flexed some impressive coaching chops, including adjusting and reacting swiftly to various situations and using the full complement of his roster.

All this means the Thunder are extremely well-positioned to make their pitch to Durant this summer. The roster is still very young -- the top seven players in this postseason are all 27 or younger -- and Donovan is finding his voice. Even so, the Thunder didn't advance, and that's devastating because they know all too well that there is no guarantee of a return to this position a year from now.

But they once again illustrated that they're right there. The Thunder topped the Spurs, a team that would've been the best regular-season team in the past 20 years if it weren't for the Warriors, with whom the Thunder stood toe-to-toe for seven games.

The Thunder acquitted themselves, and they proved they belong. They just don't have anything to show for it.