Russell Westbrook and Maurice Cheeks are engaged in a tense free-throw battle, and Cheeks is winning.

The game is simple: two points for a swish, one for a make, none for a miss, and your point total has to land on 20 exactly, or you go back to 15. Westbrook is convinced he swished a second attempt, but Cheeks isn't budging on it. Cheeks grabs the ball and wedges it between his side and elbow and stomps toward the stripe for his turn. Westbrook is howling.

This is a standard post-practice Oklahoma City Thunder scene, one that doesn't necessarily have a date on it, because it could've been from any of them. The game wraps up (Cheeks won), and Westbrook is off to the other end of the practice facility to watch Steven Adams and assistant coach Mark Bryant battle one on one in their own post-practice game. With each bucket Bryant scores, Westbrook's volume turns up. By the time the winning bucket comes -- Bryant beat Adams with an old man up-and-under move -- Westbrook is screaming "game time!" as he charges in circles around Adams mocking his big man. 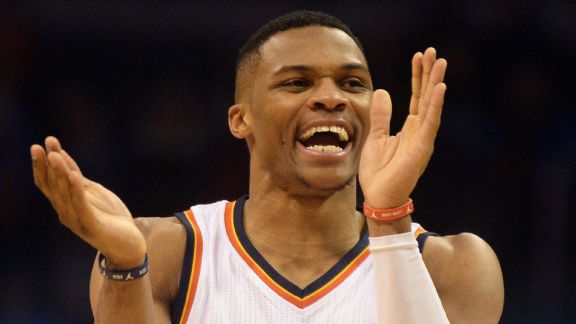 A highlight-reel dunk or triple-double waiting to happen, Russell Westbrook puts on a show that you don't want to miss. See for yourself. Watching Westbrook

On the surface, nothing has changed in Westbrook's world. He still practices the same way he always has ... hard. He still energizes the facility with endless noise and emotion. He still shoots on the same basket, still has his same routine, still cracks jokes and busts on any staffer in sight.

But there's an air of ownership as Westbrook prowls around the practice court, stopping to jab or encourage teammates as they go through individual drills. He makes his way over to a group of waiting reporters and flips a new switch. He's affable and, well, downright friendly. He praises teammates without prompting, at one point naming off almost every player on the roster when asked about a perceived lack of shooting. He smiles. He, gasp, makes eye contact. It's clear: He's trying.

Westbrook began his transition to being a kinder, gentler teammate two summers ago when he watched film on how his visceral reactions changed the body language of teammates. You can see him catching himself sometimes, sticking a hand out for a side-five through gritted teeth after a pass slips through someone's hands. Westbrook has always been somewhat of a loner, but in the wake of Kevin Durant's departure, Westbrook has apparently come to terms with his new responsibilities as the primary, forward-facing star of a franchise.

Part of what Westbrook signed up for when he agreed to his contract extension was a responsibility to help a developing roster grow and evolve. There have been many comparisons of him to Kobe Bryant, at least in terms of mentality and competitive spirit. And as was well-documented, Bryant didn't cope well with mentoring a young team that was losing. The Thunder will be much better than Bryant's late-career Lakers, but Westbrook will have to endure some frustration.

"Russell is going to do what Russell does, and he does it at a very high level," Thunder coach Billy Donovan said. "But it’s really more about our team and how we’re going to progress moving forward together as a group.”

There's an expectation Westbrook is approaching this season operating under a scorched-earth policy, that each and every night he will attempt to burn his opponent to the ground by single-handedly shouldering the responsibility vacated by his former superstar teammate. That's accurate, albeit for an unexciting reason: Russell Westbrook has always approached every game that way anyway. It's his greatest asset and his greatest flaw. Ask him if this year will be any different and he scowls. Assuming there's more effort to give implies he wasn't giving it all before.

The question is if Westbrook will try to do more. Teammates say Westbrook shouldn't feel that way because it would be unhealthy. It has to be a community effort to replace what they've lost. On the other hand, Westbrook has always struggled with trust. It's not because he's selfish or wants the spotlight. It's mostly just a case of if you want something done right then you have to do it yourself.

The Westbrook-led Thunder will have a tangible identity. They will be athletic. They will be tough. They will be rugged. And it won't always be pretty. Whatever happens, the Westbrook revenge tour will be one of the league's most compelling storylines all season.

A lot has changed around Westbrook in the last three months -- new role, new teammates and a new burden. Westbrook's mindset, though, is the same as it ever was.

"The main focus is to win a championship every year," he said, "and that's what I'm going to try to do."