ATLANTA -- It took Russell Westbrook his usual amount of time to get dressed following the Oklahoma City Thunder's 102-99 win over the Atlanta Hawks, meticulously assembling Monday's outfit. Black, head-to-toe, buttoned up to the top, with a pair of clear framed glasses. As he walked up to speak with reporters, a sixth straight triple-double in hand, nearby teammates poked a little fun at his getup, joking he looked like he was about to walk to the pulpit.

The energy in the Thunder's locker room was almost tangible, which isn't surprising considering that's a sixth straight win. Any streaking team has a good time.

But the Thunder were vibing at a noticeably high level, with Victor Oladipo singing in the showers like he wanted to raise Sinatra from the grave, Westbrook yelling at him, and everyone else cackling. Westbrook's historic stretch of triple-double stat-stuffing has everyone's attention, but for the Thunder, it's becoming a rallying cry for the team.

Westbrook triple-doubles are like snowflakes, and not all are created equal. Monday's started slowly, with him struggling with his shot, hitting just 1 of 8 to start. For a moment there, as silly as it sounds in retrospect, there were some wondering if Westbrook would actually break the streak because he failed to get the points. That shook loose, though, in the third quarter as Westbrook erupted for 16 points in the frame, hitting 5 of 7 shots. By the end of it all, he had scored the Thunder's final nine and finished with 32 points on 10-of-22 shooting with 13 rebounds and 12 assists.

It was a flurry of vicious, ruthless closing, with Westbrook dropping a pair of jumpers, including an acrobatic and-1. As he walked to the line for his extra free throw, fans in Philips Arena showered him with MVP chants.

"That's crazy, right?" Westbrook said. "It definitely caught me off guard, but I just played, man, and continued to play. Especially on the road."

Westbrook continues to downplay the run, deflecting every question about it with a response that he's either "blessed" or just likes winning. As of now, it's building an energy without being an actual distraction, and Westbrook's teammates have fully embraced it and are feeding off it. Steven Adams, who is highly regarded by the organization for his selfless nature, made sure to pull his hands back on a rebound in the third quarter to let Westbrook grab it. Some might see it as a stat conspiracy, but the triple-doubles are legit, and Westbrook's teammates are all-in on them.

"I just hope he keeps doing it, man. It's unbelievable," Anthony Morrow said. "He's getting [the numbers] within the game. It's not like he's forcing it. It's something I've never seen before. It's a blessing for all of us to be a part of that type of greatness. He's doing it for the team. He's leading us. We're just following him." 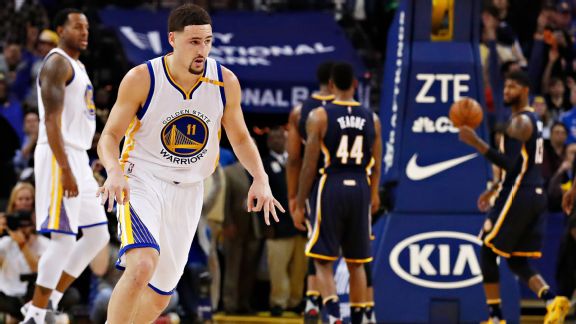 Golden State guard Klay Thompson was at 60 points and climbing when a lopsided game put him on the bench.

Westbrook is manufacturing assists for teammates who have produced in the wake of Kevin Durant's departure over the summer. That's the thing about assists: It takes two for it to happen. Westbrook averaged 10.4 assists last season, but that was alongside a four-time scoring champion who could take a simple post-entry pass and turn it into a stat. Last season, 30.5 percent of Westbrook's assists went to Durant. This season he's adjusting, turning less accomplished offensive players into threats, redistributing the wealth and diversifying OKC's attack.

It's 11 triple-doubles this season in 22 games, or in other words, one every two games. He has more in 22 games than Stephen Curry, Durant, Dwyane Wade, Tracy McGrady or Vince Carter have in their careers. That's 48 in his career, 11 away from passing Larry Bird for fifth all-time. And 19 of them, including Monday's, have come in three quarters or less. Since Westbrook was drafted, the next closest players to post triple-doubles in three quarters are Curry and James Harden, who each have done it four times.

On Friday against the Houston Rockets, Westbrook will go for a seventh straight, something not accomplished since Michael Jordan in 1989. And more than a quarter of the way through the season, the reality of the impossible is setting in: Westbrook really might average a triple-double.

"You could see it in the summertime," Morrow said. "He never backs down from a challenge. I think where some people may have seen this as a tough situation for him with all those guys leaving ... he trusted in us and definitely trusted in himself, and you see what he's doing. He's leading us and doing a great job."

And the final stat: The Thunder are 9-2 this season when he records a triple-double. As long as that trend continues, the good times will continue to roll in the Thunder locker room as Westbrook does the same toward history.