HOUSTON -- It was a long embrace at half court between Russell Westbrook and James Harden following the Houston Rockets' 118-116 victory Thursday over the Oklahoma City Thunder. The two presumptive leading MVP candidates, and former teammates, giving each other immense respect after a close, competitive game.

Harden got the most important stat, though: another tally in the win column.

"It's great, man," Westbrook said of the competition with Harden. "That's what sports are all about." 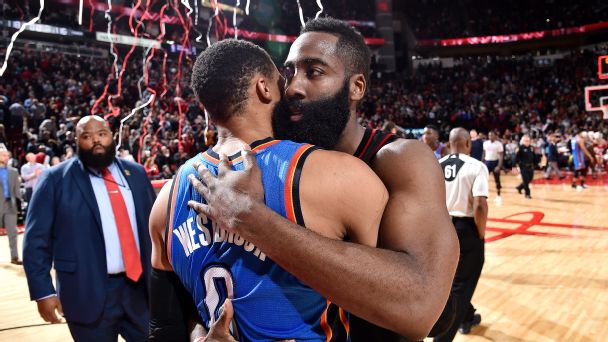 It was most everything you could want in an MVP showdown, with Westbrook and Harden trading haymakers throughout. Westbrook helped spark an 18-point comeback that eventually saw the Thunder take a lead on a Victor Oladipo 3 with 1 minute, 54 seconds left. And he also had the opportunity for the game-winning dagger, a pull-up 3 over Harden. On line, but just a tad long.

"You seen what happened," Westbrook said. "Nothing to take you through. I missed the shot."

On the other side, Harden had the most crucial play, deferring to an open Nene on a roll with 3.8 seconds left to set up the eventual winning free throws. It was somewhat of a scripted finish, with Westbrook trying to win the battle by forcing the ball into the basket almost entirely himself, while Harden made the "right" play by finding the open man. They have emerged as the top MVP contenders in their own ways, playing in their very distinct styles.

For Westbrook, not many players embody the hero mentality as much as he does, someone willing to fall on the sword nightly and live with the results, and reaction, of missing. It's what planted him as one of the most polarizing stars the league has ever seen. Even with clear alpha status in this current Thunder iteration, the critics were still quick to pounce after his pullup. Should've driven it. Should've passed. Should've done something else.

The Thunder, though, were fine with the shot.

Westbrook has hit his share of big shots this season in crunch time, leading the league in clutch scoring (final five minutes of a game with the score within five points) by a wide margin. The Thunder's plan is largely for Westbrook to do some stuff, and in the end, hope the shot goes in. A lot of times it has, as in Boston a couple weeks ago when he iced the Celtics with back-to-back, cold-blooded 3s.

Against the Rockets on Thursday, he was 1-of-6 in the clutch, missing a number of tough looks as he hunted his own shot. The Thunder's best play down the stretch was Westbrook creating space, kicking to Jerami Grant on the wing, who made an extra pass to Oladipo, who canned the go-ahead 3. After that, Westbrook took every shot (not counting Enes Kanter's desperation tip with 0.7 seconds left).

The Thunder's January schedule sets them up with a difficult road ahead, and there will be a lot of coin-toss games to come. They're already 0-3 this month, with three tight road losses to playoff teams, all of which featured something lacking in the clutch. It's low-hanging fruit to blame Westbrook, because he's being asked to effectively play as perfectly as possible. It's a heavy burden to bear, and one that's unrealistic for an imperfect player like Westbrook.

What makes Westbrook so special is the chaos and unpredictability, and to get the best of him, you have to sometimes live with the worst. The shot over Harden was on line and on balance. It looked good. It didn't go in. Does it become a good shot if it drops? With Westbrook, is the evaluation only in the outcome? In this case, Westbrook had hit a career-high eight 3s, so it would seem the shot would be more justifiable.

There's obviously room for growth, but the Thunder don't pretend to be a finished product. Westbrook has been cast into the closing role after spending eight seasons deferring to Kevin Durant in these situations. He's had his moments, slamming the door on the Celtics (twice), the Clippers, the Hawks and the Rockets (remember that dunk over Clint Capela?). The Thunder are content to live and die by Westbrook's decisions, because really, what other option do they have?

There wasn't as much frustration as you might expect in the Thunder locker room, with most players pretty matter-of-fact postgame. Westbrook was his typically brief self, answering six questions in less than 50 words, but not upset. Oladipo was defiant about the three-game losing streak.

The Thunder are comfortable with who they are and really don't seem to sweat this type of loss. They know they're only going to go as far as Westbrook can carry them. On Thursday, he got them to the finish line but couldn't run them through the tape. So it's until next time for them, and they'll just have to hope the ball goes in then.