OKLAHOMA CITY -- It was less than two weeks ago when Russell Westbrook left Memphis with zero assists, six turnovers, an ejection and a 34-point loss. It was, without question, his worst game of the season.

"I was in the shower watching the rest of that damn game," Westbrook said after shootaround Wednesday morning. He and his teammates watched as Troy Daniels and the Memphis Grizzlies poured it on them from 3-point land, something Andre Roberson felt was "disrespect." That sentiment was echoed by teammates. 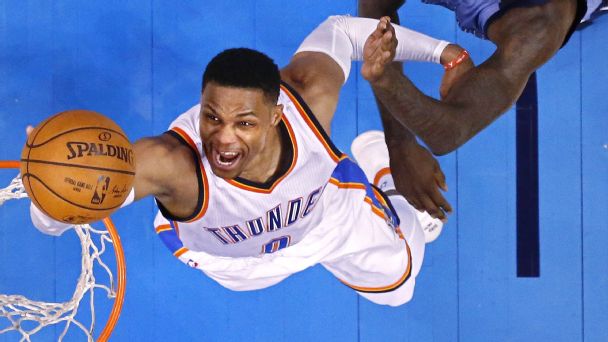 Russell Westbrook put up 24 points, 13 rebounds and 12 assists for his 18th triple-double of the season.

But it didn't take long to see how Wednesday's game would be different. Westbrook had an assist three minutes in, and he had eight by halftime; the Thunder had nine total in the previous game at Memphis. Westbrook had never recorded a triple-double against the Grizzlies in the regular season, but he was sniffing one at the break and broke through early in the fourth. He has now recorded a triple-double against all but five teams in the league.

"He impacted the game," Thunder coach Billy Donovan said. "Maybe the ball didn't go in the basket, but he impacts the game in a lot of different ways, and I think tonight is a perfect example of that. Whether or not he's making or missing shots, it doesn't really make a difference. He can get his fingerprints onto the game. I thought he was really, really good."

The Grizzlies have established themselves as sort of clutch-time geniuses this season, going 14-2 in games that are within three with a minute or less remaining. And they were headed for that same scenario against the Thunder after Mike Conley jumped a Westbrook passing lane and had a clear path to the basket to cut OKC's lead to two. But Steven Adams, remarkably, chased down Conley, spooking him from a layup and forcing Conley to retreat to the 3-point line. With Conley isolated, Adams stayed disciplined and blocked the point guard's stepback 3. Westbrook grabbed the ball, pushed ahead and hit an open Victor Oladipo for a dagger 3 with 1:13 left.

It was the perfect crunch-time conclusion for the Thunder, avoiding a one-possession game with a minute left and instead playing spontaneously, where Westbrook is at his best. He's often criticized for resisting the pass in clutch-time situations, but with Oladipo running the floor with him and two defenders committed to stopping Westbrook in transition, the open man was there and Westbrook hit him.

"That's what's good about the rest of our dudes, man," Adams said. "They aren't really hunting for shots. They aren't going to let it affect their game if they don't [get] any shots. But when it comes their way, they know what to do with it. So they're comfortable. And Victor did a good job. Kudos to him. Top man."

For the Thunder, it's a critical win ahead of a six-game trip that will see them away from home for 15 days. January is filled with difficult games for them -- mostly on the road -- which made beating the Grizzlies especially important. They're 3-3 in the month so far, with three close road losses to playoff teams. The urgency was there against the Grizzlies -- the tone was set Tuesday with the talk of disrespect and payback -- and Westbrook made sure to run the Thunder to the finish line.

He now has 18 triple-doubles, equaling the number he had last season, when he tied Magic Johnson for the most triple-doubles in a season since 1981-82, and Westbrook still has 42 games remaining. The Thunder are now 15-3 this season when Westbrook records a triple-double, but those wins have come mostly against sub-.500 teams. The Grizzlies are a quality team well north of .500, and they're elite on the defensive end. So if you're looking for some triple-double validation for Westbrook, this game is Exhibit A. The Thunder need every bit of what they're getting from him, and as they embark on a tough trip ahead, they're probably going to need him even more.

Sporting a Judas Priest "Keep the Faith" shirt after the game, Westbrook wasn't in a celebratory mood. He kept his answers short -- which is standard, of course -- and didn't play along when asked what his favorite song was.

"I don't know," he said before walking away.

A shame, because with the way the Thunder entered the game talking about disrespect and revenge, the right answer would've been, "You've Got Another Thing Comin'."