CLEVELAND -- It was a slow, lonely walk for Russell Westbrook to the Oklahoma City Thunder bench with two minutes remaining on Sunday and his team down 19 to the Cleveland Cavaliers. It's the NBA walk of shame, checking out with time on the clock but the game out of reach.

It was a fitting image, Westbrook walking alone back to the Thunder bench, untucking his jersey as he dropped himself into the very last seat on the row. In a season where he has adjusted to life as a lone wolf, he has led his team to the middle of the Western Conference playoff hunt on the back of an outrageous run of triple-doubles.

But on this day, even with Cleveland's Kevin Love sidelined for a half, the options, depth and star power of the Cavs overwhelmed Westbrook and the Thunder 107-91.

“I thought we had some shots that we didn’t make," Thunder coach Billy Donovan said. "I thought that we missed a lot of stuff around the basket. We have to make those plays. I thought we had a couple of possessions where we lost control and the ball got slapped out of our hands. So, some of those led to some fast-break points. There were some moments there in the first half where I felt that we played really well. Then there were some moments where I think we didn’t play as well.”

Against one of the league's elite teams, the Thunder's margin for error is slim. It requires near perfection from Westbrook, and for his supporting cast to provide some kind of boost. On Sunday, neither happened. Westbrook walked away with another triple-double -- his 24th of the season -- but for just the sixth time, he also took a loss when recording one. He shot the ball miserably (7-of-26) and was clearly bothered by the Cavs' plan to bracket and swarm him in every pick-and-roll.

Westbrook's routine assault on the box score has been a sight to see the entire season, and he has normalized the triple-double. He didn't play well in Cleveland, but he also put up 20 points, 12 rebounds and 10 assists in 36 minutes. But as he says often, his only focus is on winning, and no triple-double will ever serve as consolation. For the Thunder this season, triple-doubles often come as a prerequisite for a win. Against the Cavs, he was handed the rare empty triple-double.

There aren't many players as willing, or equipped, as Westbrook to take on the weight he has this season, generating more than half of his team's entire offensive output. And with Enes Kanter out with a broken arm for at least a month, Westbrook is faced with doing even more.

"In my opinion, that can't all fall on Russell," Donovan said. "That wouldn't be fair to him."

It's not fair, but that's the Thunder's reality. There's a reason his usage rate is on track to be the highest in NBA history. That kind of burden can wear on a player, especially one as emotional as Westbrook. 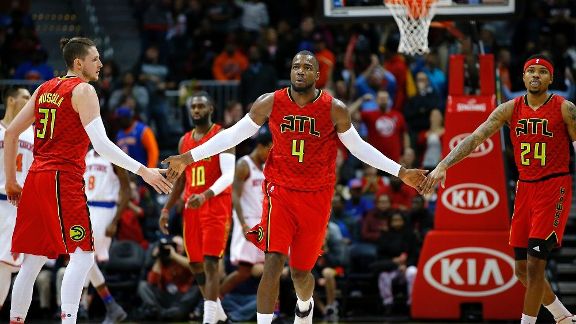 The Knicks went to four overtimes for the second time in their history. And lost.

It appeared Westbrook was frustrated late in the fourth on Sunday as the game got away. After a pass to Steven Adams was knocked away, Westbrook dropped his head and moped his way back on defense. After a loose ball got away from him a few minutes later, he kicked his leg out in an apparent attempt to trip Iman Shumpert. Westbrook's competitive spirit is what drives him to reach the remarkable level he's at. It's also what sometimes gets in his way.

“I don’t think he was frustrated, though," Shumpert said. "Honestly, guarding Russell Westbrook and him being probably most fierce competitor I’ve ever had to go against, he’s one of those guys that whether he’s playing good or bad, he’s coming full speed. That’s one of those guys where you can’t really make that read of, ‘Oh, I’ve got him frustrated.’ You have to be locked and loaded and ready to go.”

Westbrook didn't get the help necessary on Sunday, but that largely was because he couldn't create it. That's kind of the operating procedure for the Thunder. There's talent on the roster, but Westbrook is the engine, the wheels, the body and the mechanic that repairs the car when it breaks down. The Thunder have won this season when he hasn't played particularly well, but not against the elite teams. There was a glimpse of support in the fourth as the second unit had trimmed a 19-point Cavs lead to seven as Westbrook waited to check back in with eight minutes to go. Westbrook checked in, he missed a moderately open 3, the Cavs scored quickly and the game slipped away from there.

"Some mental mistakes," is how Westbrook explained the final eight minutes. A follow-up was asked about what specifically those were.

Westbrook's postgame media availability went as it tends to go, win or lose, with brief answers and standard tension. At one point he said, "The game is the game," to explain the Thunder's difficulty in finishing at the rim, which is technically accurate.

Westbrook wasn't noticeably more frustrated or anything, at least not any more than he ordinarily is after a loss. He took his time getting ready, making his way over to talk to reporters some 10 minutes after the last Thunder bus to the airport was scheduled to leave. (Don't worry. They waited for him.) He did his session, which lasted less than two minutes, and he was out. Fittingly, he was the last player to leave the locker room.