EUGENE, Ore. -- Every season is a journey and most are bumpy, but it would be hard to imagine many teams have started so poorly but ended with such euphoria as the 2009 Oregon Ducks, who overcame a nine-point third quarter deficit to beat rival Oregon State 37-33 in the Civil War for the Roses.

On Sept. 3, the Ducks were either a joke or a cautionary tale, depending on how seriously one saw a humiliating defeat at Boise State and a post-game meltdown by LeGarrette Blount, whose punch of a Broncos player became the endlessly replayed highlight of a team on the brink with a first -year coach who looked like he was in over his head. 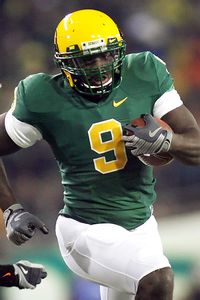 LeGarrette Blount returned to the Oregon lineup for the first time since being suspended following a season-opening loss to Boise State.

On Dec. 3, precisely three months later, the seventh-ranked Ducks won the Pac-10 championship and earned a spot in the Rose Bowl opposite Ohio State, and coach Chip Kelly is almost certain to earn Pac-10 Coach of the Year honors.

"We were always capable of greatness but we definitely had some hardships along the way," Ducks quarterback Jeremiah Masoli said.

The Ducks will play in their first Rose Bowl since the 1994 season.

Want full circle? Blount, whose suspension ended three games ago, saw his first action since Boise State in the third quarter. He rushed for 2 yards on his first carry. On his fourth, he went 12 yards for a touchdown to close the deficit to 30-28.

Kelly said it wasn't any grand plan. That moment, with the Ducks trailing by nine, just seemed like the time to reintroduce Blount to the world and see if he could give his teammates a spark.

"He did give us a spark," Kelly said. "It wasn't a plan. He worked himself back in."

So Blount, who wasn't made available to reporters after the game, got his redeeming moment.

But the starring roles belong to the two men who stepped up after Blount was forced to step aside -- redshirt freshman running back LaMichael James and quarterback Jeremiah Masoli. 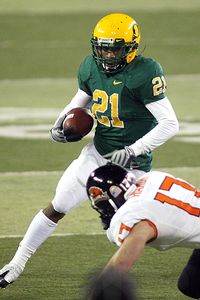 James rushed for 166 yards and three touchdowns, more than making up for a second-quarter fumble in Ducks territory that set up an Oregon State field goal. He moved into second place on Oregon's single-season rushing list with 1,476 yards this season, which only increases his Pac-10 freshman record.

Masoli rushed for 40 yards and completed 14 of 21 passes for 201 yards with a 73-yard touchdown toss to Jeff Maehl. But Masoli's value isn't about pure numbers. It's about playmaking in pressure situations.

Take the Ducks final possession, which burned the final 6:09 off the clock.

On fourth-and-3 from the Beavers 33, Kelly opted to go for it. The called pass play broke down. Masoli sprinted out of the pocket to his right. He turned the corner. Oregon State safety Lance Mitchell saw Masoli make his move, so Mitchell made his.

About a yard in front of the first-down marker, Masoli met Mitchell head-on. And Mitchell lost the battle. Masoli exploded through him for the first down.

"I think Jeremiah, for what we do, is the best quarterback in the country," Kelly said.

By the way, anyone notice how precisely Kelly and Masoli managed the game at the end?

The Ducks outrushed the Beavers 288 yards to 83, but the Beavers passing game had the Ducks on their heels much of the night. Sean Canfield completed 24 of 36 passes for 306 yards with two touchdowns.

Still, the Ducks defense had just enough. The Beavers scored a touchdown on their first possession of the third quarter. They wouldn't see the endzone again.

Just like this season, the Ducks started the Civil War slowly, gifting 10 points to the Beavers. But they finished fast and with poise.

Kelly, who immediately inspired doubters after the Boise State debacle, kept a firm hand on his team's steering wheel, preaching a simple philosophy of winning the day.

And the Ducks won this very important day -- perhaps the biggest in the history of the rivalry -- which means they're going to the the Rose Bowl.