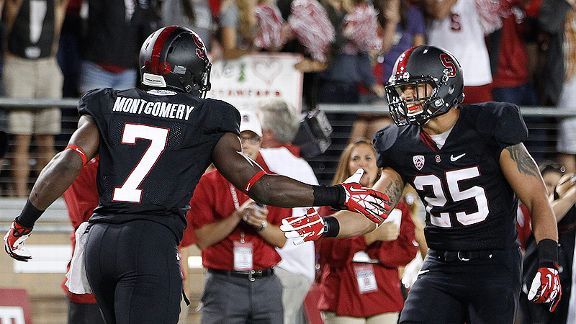 Ty Montgomery returning the opening kickoff 99 yards for a score vs Washington Saturday.Week 6 featured several exciting games. Georgia needed overtime and a fumble in the end zone to beat Tennessee, Ohio State came back from a 10-point second-half deficit to defeat Northwestern, and Jameis Winston continued his brilliance in his first game against a ranked opponent.

With the help of ESPN’s new college football metrics (see explanations here), ESPN Stats & Information looks back on Week 6 and ahead to this weekend’s matchup between Oregon and Washington.

We first look at how Stanford's special teams were the difference in its three-point win against Washington.

The Cardinal posted a +15.3 special teams EPA (expected points added is the contribution of each unit to team’s net points in a game) Saturday, the highest for any team in a game this season.

They returned the opening kickoff for a touchdown and made their only field goal attempt. Additionally, Ben Rhyne punted six times for a career-high net average of 42 yards.

With a -2 and a -10.2 offensive and defensive EPA, respectively, Stanford would have lost to Washington by about 12 points if the Cardinal had an “average” special teams unit.

Bryce Petty (97.1 Total QBR) has now posted a Total QBR of at least 90 in each of Baylor's first four games. Petty threw for 342 yards in the first half against West Virginia, as Baylor scored an FBS-high 56 points before halftime for the second time this season.

AJ McCarron (97.0 Total QBR) matched his career high with four touchdowns against Georgia State, all coming in the first half. McCarron only had one incompletion on 16 passes and led the Crimson Tide to touchdowns on all five of the drives that he quarterbacked.

Derek Carr (97.0 Total QBR) threw for 390 yards in the first half against Idaho, the most passing yards in a half by an FBS quarterback during the last two seasons. Carr threw five touchdowns, extending his FBS-leading streak of 25 games with a touchdown pass.

Connor Shaw (96.2 Total QBR) posted a Total QBR of at least 90 for the first time this season, despite playing with a shoulder injury that knocked him out of the UCF game the previous week. Shaw completed 17-of-20 (85 percent) passes against Kentucky, his third-highest completion percentage in 25 career starts.

Offense: Baylor. In a 73-42 rout of West Virginia, the Bears added 40.6 expected points on offense, which means if Baylor had an average offense, it would have actually lost by almost 10 points.

Looking ahead to Week 7

Oregon is traveling north to face Washington. In addition to hosting the Ducks, the Huskies will also host College GameDay.

Oregon, primarily known for its offense, has added the most expected points on defense among FBS schools (99.7). Opposing quarterbacks have a Total QBR of 23.3 against the Ducks this season, sixth lowest in the FBS.

Washington quarterback Keith Price has a Total QBR of 73.5 this season, up from 40.9 in 2012. Price will look to continue his improvement against an Oregon team that held him to a career-worst 10.1 Total QBR last season.

In the next week, ESPN Stats & Information will be releasing two new team ratings: the Championship Drive Rating and the Football Power Index (FPI). You will find an explanation of these ratings here.

The Championship Drive Rating will attempt to answer the question, “which teams deserve to be in the playoff based on what they have accomplished this season?” by focusing more on their résumé than who would win head-to-head.

The Football Power Index looks to answer the question, “if two teams were to meet at a neutral site, who has the advantage?” This metric is based on all facets of the team and adjusting it for the strength of its opponents.