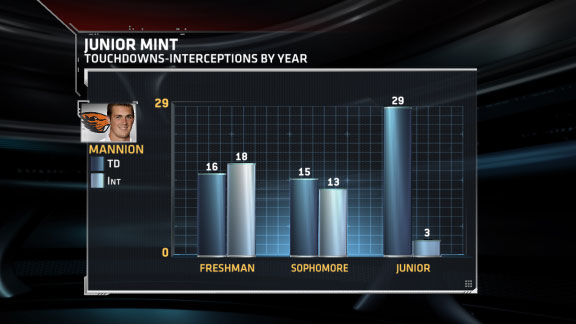 After losing its season opener to FCS opponent, Eastern Washington, Oregon State has won its last six games and is No. 25 in the first BCS standings of the season. The Beavers are one of two Pac-12 teams without a conference loss.

Sean Mannion has not looked back since winning the starting quarterback job over Cody Vaz before the season.

He leads the nation in both passing yards (2,992) and touchdown passes (29), and he has thrown only three interceptions in 334 attempts.

Mannion came into the season with 31 touchdowns and 31 interceptions in his career.

His FBS-leading 29 touchdown passes are already tied for the school record. Mannion has thrown for at least 350 yards in all seven games; no other Beavers’ quarterback had more than four such games in a season.

Oregon State has started 6-1 despite the absence of a legitimate rushing game. The Beavers average 73.7 yards rushing per game, second-to-last in the FBS.

As a result, the Beavers have gained 85.7 percent of their total offense through the air, second in the FBS behind Washington State.

Faced with a meager rushing game, the Beavers use screen passes as an extension of their run game. Mannion leads all automatic-qualifying conference quarterbacks with 574 yards on screen passes. The Beavers have 10 plays of 20 or more yards on such passes, six more than any other AQ program.

Mannion has made tremendous strides against extra pressure. He has thrown 15 of his 29 touchdown passes against five or more pass rushers, six more than any other AQ quarterback.

Only 17 other FBS quarterbacks have thrown as many as 15 touchdowns this season against all types of pressure. Mannion has 35 more completions and 300 more yards against the blitz than any other AQ quarterback.

Mannion has also improved his downfield passing. His 52 completions on passes thrown 15 yards or longer leads all AQ quarterbacks this season.

The passing game has thrived even after Oregon State career receptions leader Markus Wheaton moved on to the NFL. Brandin Cooks has become Mannion’s top target in 2013.

Cooks leads the FBS in receptions (76), receiving yards (1,176) and receiving touchdowns (12) this season. Mannion has completed almost 80 percent of his passes with no interceptions when targeting Cooks.

This week, Mannion and the Beavers have their toughest test yet, with No. 6 Stanford coming to Corvallis, a week after the Cardinal stymied then-No. 9 UCLA.

The Cardinal have allowed a Pac-12-low 18.3 points per game and lead the FBS with 76 sacks over the last two seasons.