A normally patient Doug Pederson has been asked so much about quarterback Carson Wentz's health this summer that the Philadelphia Eagles head coach all but threw his hands up and shouted, "Enough!" at his media conference Sunday.

The focus on Wentz's surgically repaired left knee has been so intense that the term "cleared for contact” has become part of the vernacular in Philadelphia. Those following along (read: all of Eagles Nation and thousands more invested nationwide) know it as the obstacle that stands between Wentz and the playing field. With the opener against the Atlanta Falcons just more than a week away, the prodding about Wentz's status has only picked up.

For all the will-he-or-won't-he-play conversation, key questions have been left unanswered. Such as: What exactly do the doctors need to see in order to give him the green light? He looks good on the practice field and is even participating in 11-on-11, so what's holding them back from medically clearing Wentz for a return from ACL and LCL surgery?

For answers, we turned to a pair of medical experts: chief of sports medicine at the University of Pennsylvania Dr. Brian Sennett and ESPN's injury analyst Stephania Bell.

What are the doctors looking for?

The simple answer is they want the repaired knee to function at the same level as the non-injured knee. It may be impossible to obtain perfect symmetry -- having one leg stronger than the other is not uncommon even for those with two perfectly healthy legs -- but physicians typically want the mended knee to be at 95 percent or greater before giving clearance, according to Sennett.

There are a host of ways in which they go about determining those percentages, ranging from routine examination to high-tech testing. 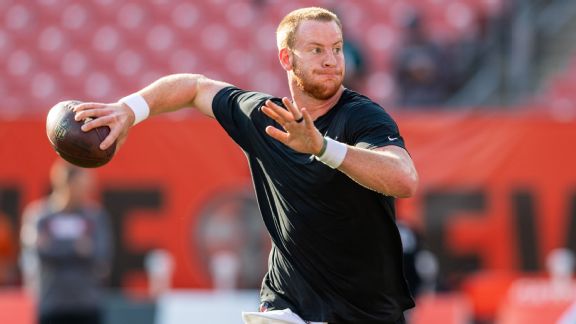 The Eagles are at the forefront of using playing-tracking analytics to monitor the recovery of players, such as Carson Wentz. Read.

There is the "hop test," during which the player stands on the uninjured leg and hops forward, then does the same with the recovering leg to see how it stacks up. They'll do a single hop, a triple hop and a crossover hop -- jumping from left to right and back again -- to see how that recovering leg is exploding compared to the healthy one.

The next layer is something called "isokinetic testing," during which an athlete gets on what looks like a leg-extension machine you might see at the gym -- except this device provides graphic output of how much force is being generated in the quadriceps and hamstring.

Then there is the examination of jumping mechanics, during which things such as knee strength, power of extension, power of flexion and power of absorption are measured.

“This is not something that you would necessarily do for every high school athlete, but for someone like Carson Wentz, you would definitely do it for them,” Sennett said.

It can get a little sci-fi here, with markers being attached to the player's body as they jump off a box and onto a force plate (which often costs more than $100,000) to measure things such as ground reaction force and impact. There is also three-dimensional tracking in which motion cameras reveal the precise angular movements of the body during these exercises. All of the data is captured to figure out exactly how far along a player is in his rehab.

This, coupled with results from sport-specific work on the field, is all used to determine whether a green light should be given. The Eagles have a player-tracking system at their practice facility that turns what they are seeing out of Wentz on the field into measurable data.

Those numbers show that Wentz's velocity is actually up from this time last year. Physically, he looks largely back to his old self.

While everything on the outside appears to be on or ahead of schedule, there's a whole other world below the surface that needs to be accounted for.

"In addition to how good the player looks, you also have to respect the biology that's happening on the inside from these repairs," Bell said. "A player can look good and they can accelerate through their rehab and can be really impressive, but you can't speed up biology.

"He can do everything right and everything that's asked of him, and they can still say, 'You know, we just want this graft to mature a little bit more,' even if he's nailing it pretty good on the parameters."

The widely accepted time of recovery from a torn ACL is nine-to-12 months. The opener against Atlanta is less than nine months from the date when Wentz suffered the injury -- Dec. 10 against the Los Angeles Rams. And his rehab was delayed as a result of the additional LCL tear, which kept him off the leg and on crutches longer than he likely would have been if it were just an isolated ACL tear.

"They have to approach him a little bit differently than you would a straightforward ACL," Bell said. "Everybody hears ACL and they just kind of stop paying attention to the fact that he had something else. But that's why it is trickier because it is a more complicated repair, and all of that is factoring into the decision-making that's going on in the background."

Wentz has said it's going to come down to the wire whether he'll be under center for the opener. Asked specifically about getting medically cleared, he recently said, "It's getting close." Based off those comments, it seems plausible that his numbers are nearing the desired benchmark, which Sennett said is typically around the 95 percent mark compared to the healthy knee.

Both Wentz and Pederson have said that the decision to clear him lies in the doctors' hands. There is some room for the organization to have a voice, however, when it comes to weighing the percentages.

“In some scenarios, that number that is maybe borderline will get pushed more one side to the other side as far as decision-making," Sennett said. "I don’t think anyone is going to make a decision with a person that is at risk, but if you have one where they are right at the borderline, that’s where decisions sometimes can get edged one way more than the other."

The clear signal from the Eagles all along has been that they will not assume any unnecessary risk when it comes to their franchise quarterback. They are taking the long view here and don't intend on being swayed by any false deadlines. And with Super Bowl MVP Nick Foles in the fold, they can wait until Wentz's numbers climb a little bit closer to 100 percent if they so choose, assuming they're not already there.

“If he doesn’t play Game 1, they won’t go into it with a preconceived date that he will return for. They will be watching his testing and when he gets to that point where he gets to that threshold that they set, he will be cleared to play,” Sennett said.

“There’s a lot of people that interject when these decisions are made. … Everyone has a motive to not re-hurt that knee. Carson doesn’t want to re-hurt it, the surgeon that performed the surgery doesn’t want to re-hurt it, the doctors overseeing his care now don’t want to have it hurt, his therapists don’t want to have it re-hurt. No one is going to turn around and say, 'They did a great job getting him back' if he doesn’t get hurt. They’ll only be the commentary the opposite way: 'Why did he get re-hurt?'"

Added Bell: "You do everything you can to feel as good as you can about the decision that you've made when you make it."