PHILADELPHIA -- Philadelphia Eagles quarterback Carson Wentz had just finished a hot August training-camp practice and was chatting with the family of Lukas Kusters -- the Dutch Destroyer -- when a little boy came sprinting onto the field and approached the circle.

He had a full head of blonde hair and was wearing shades and a green Wentz jersey. In his right hand was a replica Eagles helmet he was hoping his favorite player would sign.

"Max," called Lukas Kusters' mom, Rebecca Burmeff, encouraging the boy to join them. "Do you know who this is?"

"Hello," Wentz said, squatting down on bended knees. Rebecca had seen this before. Her son Lukas, who lost his battle with cancer in June 2017, had a Make-A-Wish visit with Wentz. She remembered how the 6-foot-5 quarterback had crouched down to be at Lukas' level -- he was in a wheelchair at the time -- and made him feel like he was the center of the universe.

Just like with Lukas, Wentz engaged with Max, asking: "Five? Hug? What do you want?" Max reached out for Wentz's hand. But at the last second, Max changed his mind and threw his arms around the quarterback.

Wentz signed Max's helmet and the two played catch; well, more like Wentz would throw it and Max would snatch it and take off in the opposite direction like a rocket, circling back eventually to spike the ball for a "touchdown." He even kicked his own extra points as Wentz played the role of holder.

Max appeared the image of perfect health as he darted all over the NovaCare practice facility, undeterred by temperatures hovering around 100 degrees. Seeing him in that moment, it was hard to believe what he had been through, and how close he'd been to not making it.

If not for the Dutch Destroyer and those who surrounded Max on the practice field, his parents say, Max's story would have almost certainly had a tragic ending.

Max's dad, Jerry Shott, is an Eagles fan right out of central casting. He goes by "Mousie" -- a nickname given to him by his mom at birth -- and is a general manager at Wawa, a convenience store so revered by Philadelphians that if you try to say another regional knockoff, like Sheetz, is better, you might end up getting socked in the nose. Jerry lived in South Philly for over 20 years, in walking distance of the stadiums. Like most people in the area, he has been an Eagles fan "for forever." 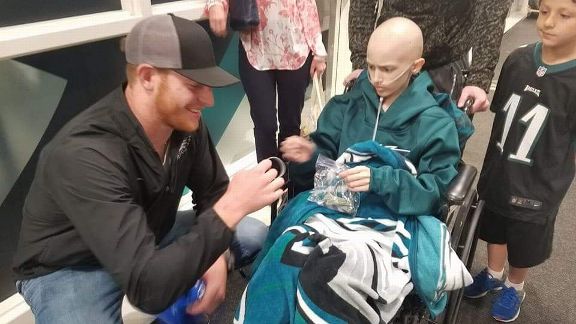 "Impactful. Meaningful. Powerful." Carson Wentz's connection to Lukas Kusters is a reminder for the quarterback that football is "more than a game." Read.
• Video: Carson Wentz's bond with The Dutch Destroyer

He and his wife, Gabrielle, have maintained a tradition since they started dating seven years ago: They attend the first Eagles home game and take a "first-game pose" photo -- flexing for the camera while overlooking the hallowed Lincoln Financial Field turf.

In late October 2017, Jerry came across the story of Lukas Kusters, the boy whose last wish was to thank Wentz for a video the quarterback sent him while he was going through cancer treatment. During a day spent together at the Eagles facility, Lukas gave Wentz a "Dutch Destroyer" wristband as a token of appreciation. So moved by his time with the boy, Wentz has not taken the bracelet off, even wearing it on game days.

Lukas died at the age of 10, 13 days after his Make-A-Wish day with Wentz and the Eagles. He was buried in Wentz's jersey.

Jerry couldn't take his eyes off the screen. Something about it kept pulling him back. He watched it again and again.

There was one part in particular he kept getting stuck on: when Rebecca was describing Lukas' symptoms prior to being diagnosed. Jerry's 4-year-old son, Max, had been sick, but it hadn't fully dawned on him and Gabrielle in the blur of everyday life that something could be seriously wrong. That changed for Jerry after listening to Rebecca.

"Lukas’ mom was talking about her son, the signs of his stomach being big and pain in his stomach, and right away I looked at Max's stomach," he said. "Watching his mom talk about the stomach, I knew instantly something was wrong with him."

"As soon as you think cancer, you’re like, ‘Oh my God, he is going to die,'" Gabrielle said.

The Shotts spent the next three weeks in the hospital. Max had five emergency blood transfusions and a platelet transfusion on the day he was brought in. Two bone marrow tests, 12 spinal taps and intense chemotherapy treatment followed.

Gabrielle: "A couple months ago, he was bald, no eyebrows, nothing. That was the hardest part for me.”

Jerry: “That’s what broke me.”

Gabrielle: “Not even being able to recognize your own child. And then him thinking he looks different.”

Gabrielle: “And when we would go out in public, a couple kids had pointed out he had no hair and stuff. Things like that break your heart as a parent. No one wants their kid to be the oddball."

During this time, Wentz sent Max a signed ball, as he had for Lukas before him. It read: "Max, Best wishes. Keep the faith and God bless!" -- Carson Wentz, AO1

"And now he’s our favorite player," Jerry said. "He even passed [Brian] Dawkins."

After 30 days, the Shotts received amazing news: Max was in remission. Because of the early detection, he had lost significantly less bone marrow than in many cases.

Gabrielle: "He had 40 percent bone marrow [lost]. Most of the time it's closer to 90 percent, almost gone."

Jerry: "The doctor said if we wouldn’t have gone when we did, because his hemoglobin count was so low, he probably wouldn’t have made it."

Gabrielle: "They said he was pretty close. If we didn’t bring him in..."

Jerry: "He would have went to sleep and never woke up again."

"If I hadn’t seen that story," Jerry added, "he probably wouldn’t be here right now, and that’s the truth.”

Max is not out of the woods yet. He is still gets chemotherapy through a port in his rib cage and in pill form, and will continue the treatment through January 2021. But the odds for full recovery are in his favor. Some semblance of normalcy is setting back in. Max was just cleared to go back to pre-K and is loving school.

"They saved his seat for him," Jerry said.

The Shotts and Kusters had not met prior to that August day at training camp. The Eagles learned of Max's story through his parents early on, as they called to share their experience and thank the team. The organization put it on Rebecca's radar shortly thereafter, but the full details weren't revealed to her or Wentz prior to that day at training camp. They arranged for both families to be in attendance, and surprised them with each other's presence.

"It just made me feel wonderful to know that Lukas isn't here with us anymore but he is still making an impact, and he's making a big one." Rebecca Burmeff,
mother of Lukas Kusters

It was then that Rebecca learned the degree to which Lukas' story positively affected Max's fate.

"I met his dad first, got to hug him first, and I think that hug that we shared, without words, it just spoke volumes," said Rebecca, who continues to help run the Live Like Lukas foundation, dedicated to helping families battling childhood cancer. It has sold over 55,000 Dutch Destroyer bracelets and apparel items since ESPN aired the feature about Lukas and Wentz. The inaugural Live Like Lukas 5K in Wilmington, Delaware, is scheduled for Oct. 13.

"When we were approached about sharing Lukas and Carson’s story, it was something that we really had to talk about as a family. We didn’t want to exploit anything in any way, and ultimately when we decided to do it, it was because my hope was that in some way, even the smallest way, if we could make an impact and touch somebody’s life by sharing this story then we thought it was worth it. It shook me to my core because not only was it such a clear indication that we made the right decision, but this story made a bigger impact than we could have ever imagined when it comes to Max.”

"I just want to thank you again," Jerry said to Rebecca later that afternoon, wrapping her in another hug.

As Max was busy sprinting up and down the field scoring touchdowns, Wentz spent time with Gabrielle and Jerry. They shared the details of their story and offered Wentz a black "Team Maximus" bracelet, complete with a Batman symbol, which Wentz slipped onto his wrist next to his Dutch Destroyer bracelet.

“It was cool. Seeing Max on the field was the best part, especially hearing how they said how sick he was and how he was struggling," Wentz said. "I’m looking at this kid just running around, it’s 100 degrees out and he’s having the time of his life, doesn’t want to go in, doesn’t want to stop playing catch or kicking the ball, just to know how quick of a turnaround he made and how it really impacted him because they saw the story.

"And I know for Rebecca, it was emotional but inspiring at the same time, for the whole Kusters family, but it was just cool to kind of see God’s hand in the middle of all of it, because I truly believe he’s working through it. No matter how tough it is, God is doing something through it, and it’s cool to see it firsthand like that.”

The bond between Rebecca and Max was instant. He took right to her and spent a good part of the day either circling around her or in her arms. While Wentz chatted with Jerry and Gabrielle, Rebecca and Max played catch a few yards away.

“Oh wow. It was wonderful being out there spending time with him. He just sort of naturally clicked with all of us," Rebecca said. "But just seeing him so healthy and so happy, I don’t know, it just made me feel wonderful to know that Lukas isn’t here with us anymore but he is still making an impact, and he’s making a big one."

Rebecca had one last thought she shared later by text.

"The one thing I forgot to say when you asked me what I was thinking when interacting with Max -- I was thinking how much Lukas would've loved him and all the energy he had and the fact that he didn't want to put his football down that day. Lukas never wanted to put his down, either."