PHILADELPHIA -- Watching the Philadelphia Eagles' offense trudge its way through much of 2019 was hard, and witnessing a home playoff loss to the Seattle Seahawks was harder. So the day after the season ended, general manager Howie Roseman walked into coach Doug Pederson's offense and handed him a piece of paper with three questions written on it -- questions that came to define the team's offseason approach.

Does he love to play?

Speed got top billing, and boy did Roseman go hard after it during the 2020 NFL draft, especially at wide receiver.

Rare game speed, we clocked Reagor at 22.6 MPH on this play #myRAmaxspeed pic.twitter.com/Oi0R64H1lP

The Eagles drafted Jalen Reagor out of TCU in the first round, added Boise State's John Hightower and Quez Watkins out of Southern Miss on Day 3, and made a trade with the San Francisco 49ers for Marquise Goodwin -- enough burners to field a medal-contending 4x100 relay squad.

Goodwin is a former Olympian and had planned to compete for a spot on the U.S. team in the long jump for the Tokyo Games (before those Olympics were postponed until next year because of the coronavirus pandemic).

Watkins had the third-fastest 40-yard dash time at the 2020 combine (4.35 seconds) and Hightower was eighth among receivers (4.43). Reagor added weight before the combine and ran a surprising time of 4.47, but followed that with a reported 4.22 showing at his virtual pro day, which more closely matches his top-end game speed.

Combine that group with Eagles veteran DeSean Jackson, who is still one of the fastest receivers in the game at age 33, and you have some serious field-stretching capabilities.

The Eagles' offense averaged 6.46 yards per target when throwing to wide receivers last season, almost a half-yard worse than every other offense in the league (next was Panthers -- 6.93), per ESPN Stats & Information research. The only team's wideouts who combined for fewer total yards than the Eagles (1,647) was the Ravens (1,419).

"When we went back and looked at our team over the last year, we wanted to get more explosive, we wanted to get faster," Roseman said. "We kind of went over the top to make sure we have explosive athletes for our quarterback, for our playcaller, and we're really excited with what we did over the [course of the draft]."

Did Philadelphia overcompensate for a lack of speed last season? Yes. If this draft goes sideways on the Eagles, it will be because they were more focused on traits and philosophical fit than they were at finding the best prospect, as could be the case with passing on LSU receiver Justin Jefferson in favor Reagor. 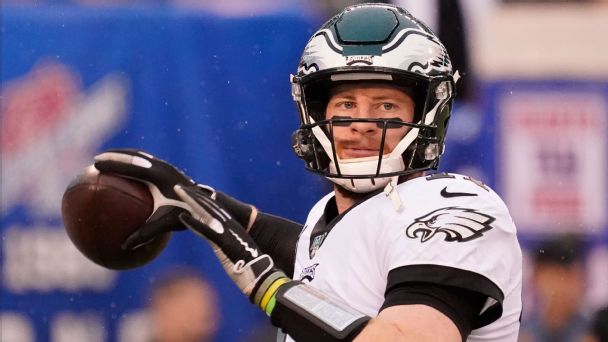 » Hurts pick could mean turbulence for Wentz
» Barnwell: What were Eagles thinking?!
» ESPN+: This rookie Eagle is a draft steal
» Eagles' 2020 draft analysis for every pick
» Taking Reagor over Jefferson a case study

But the Eagles know they have a quarterback in Carson Wentz who likes to air it out, so they went after players they believe can maximize his skill set. And with multiple vertical threats, opposing safeties are going to have to play back, creating plenty of room underneath for their tight end duo of Zach Ertz and Dallas Goedert to operate.

The odds are against all of these players working out, whether it be because of injury (Goodwin, for example, has been held back by multiple ailments over the past couple of seasons) or otherwise. But by placing enough bets on electric players, Philadelphia is all but certain to have a significantly more explosive offense in 2020, scratching the top item off Roseman's to-do list.

"Pairing me with D-Jack, I feel like that is going to be a scary combo," Reagor said.

"I'm just expecting a lot of speed and a lot of wins."