As part of their multifaceted Inspire Change initiative, Philadelphia Eagles safety Rodney McLeod and his wife, Erika, recently held a mental health forum for teenagers across iHeartMedia platforms. The music was stopped on all Philadelphia-area stations and streaming services for one hour so the assembled panel could talk about mental health issues in the youth community amid the coronavirus pandemic.

It was not McLeod's only takeover this season. With the departure of Malcolm Jenkins in free agency, McLeod has elevated to a senior leadership position on the Eagles' defense. And he's stepped up on the social justice front as well, looking to maintain the high standards Jenkins helped create for community outreach.

ESPN spoke to McLeod about his on- and off-field promotions, the Eagles' decision to draft quarterback Jalen Hurts in the second round, and other team-related developments during this most unique offseason. 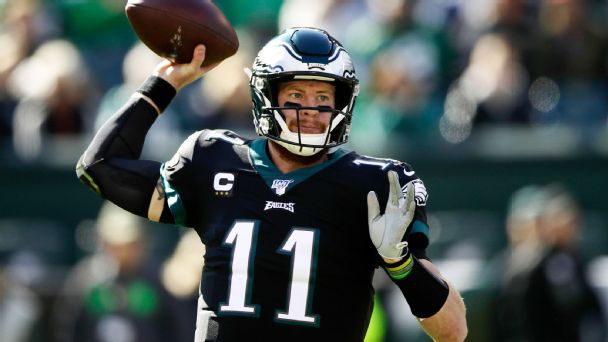 [Laughs.] Ah, man. It's a lot different seeing everybody over video rather than having that physical interaction with one another. But it was good. We had a good introductory meeting for the DBs with Coach M. (Marquand Manuel) and then Doug [Pederson] with the team meeting. It went a little shorter than I expected [about 15 minutes] but hey, I guess that's one good thing about these virtual meetings.

Are you guys doing the virtual workouts?

Yup. There's like two different workout groups. They broke it down based on the equipment that you have in your home, so if you're a guy that has access to a full gym, you'll probably get the normal workout as if we had OTAs right now. Based on whatever else you have, that's kind of how they tailor the workout. They're doing a good job at that, because not everybody is equipped with a gym. Myself, I'm not at a gym so I just have a lot of weights and kettlebells and bands, so I just have to adjust the workout a little bit.

How long are those workouts?

They usually last about 45 minutes to an hour. It's really on you, however long it takes you to complete the workout, but they're the same amount of time as was initially scheduled before all this took place.

You've been very involved in community outreach this offseason with your Inspire Change initiative, including donating $25,000 to provide access to meals for insecure youth. Why was that important to you?

Change Our Future, the foundation that my wife and I just started, we felt it was important to donate to Philabundance because of the work that they're doing for average families, being able to provide them meals in this time. It's a hard time, especially for those in urban communities, and that's our focus and mission is to empower people in those communities through education, advocacy and focus on building healthy lifestyles. During this pandemic, it was important for us and other people in the city of Philadelphia to step up in a major way and contribute ... because a lot of these families don't know how they're going to get their next meal.

How about the teenage mental health forum that you held. I am really curious about that.

That was an amazing night. The reason we created that town hall meeting and formed the panel the way we did, it was very targeted -- we wanted to address the youth specifically. There have been so many stories shared ... millions of people being laid off, to businesses closing down, the frontline workers who are working tirelessly to serve to keep us safe, and so we've heard from everybody, but the youth has also been affected by this and it's important to allow their voices to be heard and to inform them.

So that town hall effort was a collaborative effort between my wife and I, a couple doctors in the Philadelphia area, a councilman and a mental health specialist to talk about how it's impacting not only us as adults but as children and what they're facing, and encourage them and uplift them at this time because so much has been stripped of them. We're talking about their education: Some people are learning virtually, but a lot of these kids unfortunately aren't and they’re dependent upon their household environment to get them through and that's not always stable for a lot of these kids. Graduations, you don't always get to experience that, the list goes on. Sporting outlets, it could be the last time that child picks up a ball or a bat and they've missed that opportunity now. So we felt it was important to host that, people spoke from the heart and I hope it touched a lot of people.

What was your message to them?

• Where will Odell Beckham Jr. land?
• Josh Allen, master of the QB leap
• Will Mac Jones return to rookie form?
• Inside Fields' journey with epilepsy
• Can Seahawks avoid rookie wall?

My closing statement was to stay strong mentally and spiritually, and listen to what they need to do and that's follow the guidelines that have been placed upon us all. And to know that not all has been lost here. I know so much has been taken away, but it's temporary. But this also won't be the last obstacle in life that you'll have to overcome. Within obstacles there's opportunity, and I feel like now you guys have time, and success lives in opportunity so make the most of it right now. Become a better student. Dedicate your time and be productive. Add more value to yourself. Explore some colleges you never thought of or get a head start on some of those applications. There's a lot you can do to channel your energy and use it to be a better you.

Does it feel like your community outreach is increasing? I know you and Jenkins worked together on a lot of things. Do you feel like you're pushing into more of a leadership role as Malcolm moves onto New Orleans?

Yeah. I think I have to in a sense. We have other guys on the team that do an amazing job in the community -- Carson [Wentz], Zach Ertz, Brandon Graham, Connor Barwin -- and Malcolm, he took on so much, not just on the field but for this city -- and I feel like that's why he's loved so much, because of the dedication he had and the overall impact he had. Of course he will be missed dearly. I know he will continue to work regardless of whether he's here or not. But yes, I am now stepping into a bigger role as being a community leader, and this is the first step in starting our foundation to be able to help a lot of our people out. I'm excited for the opportunity.

How did you feel about the draft? What did you think of the Jalen Hurts pick?

I felt good, man. Howie [Roseman] always does a great job, and he added a lot of great talent that's going to help us out in a major way. Picking the speedy wideout Jalen [Reagor] -- we've got a lot of Jalens on the team. I guess we've got a thing for them. [Laughs.] But the Jalen Hurts pick was great. It will be interesting to see how we use him. But I think he's going to have an opportunity to blossom well here in Philly behind Carson and under Doug's leadership and the rest of our coaching staff. I'm excited. It's going to be very competitive this camp in a lot of different rooms and I'm looking forward to it, because it's only going to make us better.

What did you think about [the Eagles] taking Clemson safety K'Von Wallace in the fourth round?

I like him as well. I got a chance to take a look at his highlights. I'm looking forward to adding him to the room. We've already added a few other guys. That's why I said, man, it's going to be very competitive and I'm interested to see how this all plays out.