Matt Leo was six months shy of completing his plumbing apprenticeship when the constraints around his dream to play football closed in far too tight.

It was 110 degrees and humid in his hometown of Adelaide, Australia, that summer day in 2014, and he was working on a bridge that connects a convention center to the Adelaide Oval -- a sports stadium used primarily for Australian rules football and cricket. Working alongside tradesman and friend Matt Hoare, Leo squeezed his large 6-foot-7 frame into a tiny passage and began crawling on his hands and knees to install a drainage runoff. He banged his head on a bracket and decided in that moment that he had had enough. 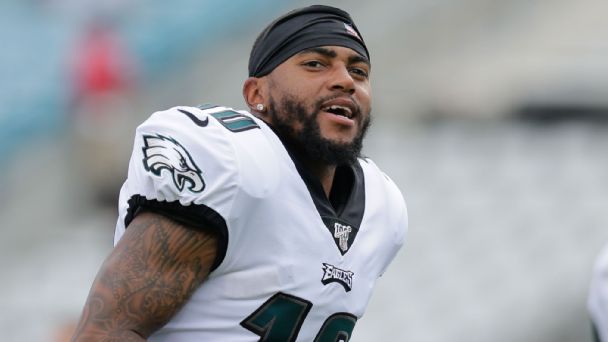 » DJax: If no fans, players should be miked
» Eagles' Lurie leads 'powerful' team meeting
» Video: Eagles a safe bet to win NFC East?
» Philly has leg up over rivals because...

"I turned to [Hoare] and said, 'Man, I'm too big to be doing this.' I miss sports and I should be playing sports still,'" said Leo, who played rugby and Aussie rules football when he was younger but found romance in American football, ignited by watching the television series 'Friday Night Lights' when he was growing up. "And he was laughing at me, and it began a conversation of how he had read [that] an Australian from Sydney had gone to the U.S. as a punter on a partial scholarship, and that's where this fire started."

He rode that fire all the way to the big stage. Some six years after deciding to ditch the plumbing life in pursuit of a football career, Leo, now 28, has finally made it. In April, it was announced the Philadelphia Eagles acquired Leo, a defensive end out of Iowa State, by way of the NFL's International Player Pathway Program. He is to be on the field with his new teammates this summer.

"He has really good size, length and athleticism," Eagles coach Doug Pederson said. "This opportunity is important to him, and he is working extremely hard during our virtual offseason."

When the roster is cut down to 55 players in early September, he can make the Eagles' team, be placed on the practice squad or be put on the international practice squad exemption list, where he would stay for the entire 2020 season while continuing to train with the team.

However it shakes out, the fact that he has made it from Australia to Philadelphia -- with key stops in Arizona and Iowa in between -- is an odds-beating feat in and of itself.

It was NFL combine season when Leo had his head-banging epiphany in 2014. The first order of business was to see how he stacked up physically and athletically to his future competition, so the friends decided to conduct what Hoare described as "backyard testing" -- setting up their own drills at a local gridiron club to mimic what was happening in Indianapolis. Leo, who routinely woke up at 3 a.m. to go to the gym before work during his plumbing days, fared surprisingly well.

"It was the year [Jadeveon] Clowney was getting drafted, I reckon," Hoare said. "We looked up all the stats. I said, 'See what you can do the bench press in, the 225 or whatever it is in pounds.' And I think he went to the gym that night and did 22 or 23 of them, and I said, 'All right. Awesome.'"

Clowney did 21 reps at the combine.

Leo ran about a 4.7-second 40-yard dash, according to Hoare, which would have put him near the top of the class among defensive ends that year.

"They were pretty impressive numbers, I think, compared to what was happening at the combine at the time," Hoare said. "So we knew he had some talent."

What he didn't have was football experience. The next step was connecting with former Hawaii offensive tackle turned trainer Paul Manera, who had contacts in the States and was running a camp for Australian athletes in Sydney. After eight months of training, Leo began sending tapes of his workouts to college coaches, including one to Arizona Western head coach Tom Minnick.

"You could see some of the potential he had just doing some of the weight-training stuff and his box jumping and running and footwork. You take a shot on a 6-7, 245-pound kid," Minnick said. "You can't teach that. I told him he could walk on for the first semester. Before the semester was over he was on a scholarship, and the rest is history.”

Well, it wasn't quite that easy sailing. Leo was green when it came to football, leading to a bumpy first season and some levity-providing bloopers. He played special teams initially. In one game, the opposition tried an onside kick, which came bounding toward Leo. Unsure of the rules, he had no idea how to react. He froze.

"He was stunned. He didn't know what to do," Minnick said with a laugh. "We had to kind of fill him in on what he was supposed to do: fair catch the ball, or if he gets it and there's nobody around, he can run with it. He said, 'Oh, I like that. It's just like rugby!' You had to kind of teach him the rules of the game as you're going along."

Leo nearly gave up. His family had fallen on hard times in Australia, further clouding whether he was on the correct path. Minnick's wife, Tiffany, was the athletic academic specialist at Arizona Western at the time while also holding the unofficial title of team mom, and she proved a guiding force for Leo.

"He felt obligated to go home and go back to his skills as a plumber and help out," Tiffany said. "His parents were telling him no, but he was being a young adult. At the age he was at, it tugged at him: Was this dream really going to come true? He had a hard time. I told him, 'I know you want to go home, but I'm pretty sure your parents have worked hard for you to get here. You need to stay.'"

Things clicked his second year at Arizona Western. He began catching the eye of scouts who were in town to recruit his teammates, and before long, he had offers from a host of Power 5 schools, including Iowa State.

From 'Dad' to newbie

"When you meet Matt, he's built like the mix of a Greek god and an elite WWE wrestler," Iowa State coach Matt Campbell said. "Your visual impression is like, Man, is this guy impressive. And from a football standpoint, my first impression was how passionate Matt really was to get better."

Leo's first season with the Cyclones didn't go as planned, as he suffered a pectoral injury and received a medical redshirt. He appeared in 20 games over the next two seasons, however, posting three sacks and 11.5 tackles for loss, making leaps in his development along the way.

In his mid-20s while at Iowa State, his teammates gave him the nickname, "Dad."

"When Matt came in here, we were still in the infancy of building this program. Matt's veteran-ness and his wisdom was able to really kind of motivate, inspire and give some guidance to some really talented players in this program," Campbell said. "I think that's where that fatherly figure came into play."

Having made his mark, Leo was one of nine players selected to the International Player Pathway Program this offseason. The pathway program, established in 2017, aims to provide international athletes an opportunity to compete at the NFL level and ultimately earn a spot on a roster.

This year's group trained at IMG Academy in Bradenton, Florida, for nearly two months before the coronavirus pandemic shut things down. He returned to Ames, Iowa and, with gyms closed, had to get creative. Iowa State teammate Noah Juergensen pointed him to his girlfriend's family farm that had a weight room in its barn in the town of Ripper, about an hour away. Leo made the trek out five days a week to get his work in, never meeting the gracious farm owners in the age of social distancing.

He has since gotten back into a gym. When he's not training, Leo said he's mowing lawns around Ames for some extra scratch.

"It's more I'm just helping out neighbors," he said. "Sometimes I don't even want to take [the money]. If I can help the people that once supported me at Iowa State, that means more to me than anything. I'll mow the lawn for free, even when I'm in Philly."

It's not clear exactly when that will be, though there's hope players will be allowed in team facilities for training camp later in the summer. Once there, he'll be greeted by a couple of fellow Australians -- tackle Jordan Mailata and punter Cameron Johnston -- who reached out to him immediately after he landed with the Eagles.

Leo faces a climb to make the team at a crowded position for the Eagles, but then again, that's nothing new.

"That drive for greatness that burns in Matt is what's going to give Matt a real opportunity to succeed at this next level," Campbell said. "I think he's a guy that's got every opportunity to play and have a long career in the National Football League."

Added Minnick: "He'll have a chance, because his best football is in front of him still."