PHILADELPHIA -- Philadelphia Eagles defensive end Brandon Graham is always on the hunt for his next mark, and as their Week 8 matchup against the Dallas Cowboys wore on, one emerged in wide receiver Amari Cooper.

Cowboys backup quarterback Ben DiNucci was struggling in his first career start. Graham noticed Cooper beginning to sag in the midst of an unproductive day (one catch, five yards), so Graham -- an elite and relentless trash-talker -- turned his attention to the star wideout, telling him he "might as well hang up the cleats" and "get ready for next week!" because his efforts were futile. 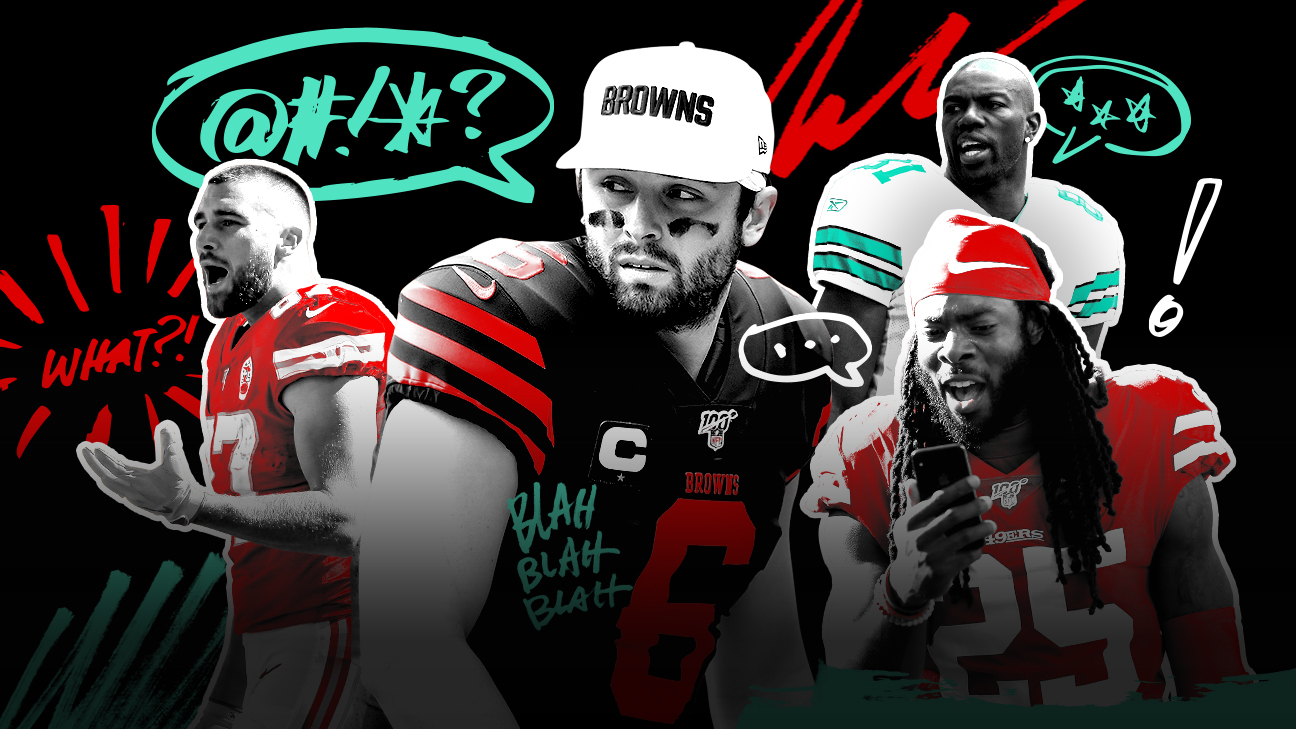 "I knew the rap sheet on him. His body language is bad, so when you see his body language [worsen] I'm like, 'Oh yeah, I'm about to get him.' So I started talking to him," Graham told ESPN, beginning to burst into laughter. "He was gone. He's like, man, I can't wait until Dak Prescott gets back. That's the type of face he had."

Graham, 32, is on his way to a career season. He is tied for fourth in the NFL with seven sacks, is fourth in tackles for loss (nine) and is 10th in pass-rush win rate (22.3%), per ESPN metrics and NFL Next Gen Stats. The only other player in the top 10 in each category is Pittsburgh Steelers outside linebacker T.J. Watt. That production has Graham eyeing his first Pro Bowl selection.

He has been the Eagles' best player in 2020. He has also been their most valuable energy source. In a season where few or no fans are in the stands on game day and social distancing has cooled chemistry, Graham's non-stop motor and endless river of cheers and ribs have offered sustenance.

"The biggest thing is he always keeps his energy up on the field, on the sideline, during practice, in the breakfast line. He's just a guy that embraces every part of this thing," Eagles defensive coordinator Jim Schwartz said.

"I always tell everyone about BG: He's a different guy on the field," added Eagles safety Rodney McLeod. "Off the field, he's probably the nicest guy, always full of energy and smiling, but get out on that field, man, and he turns into a monster."

'Three piece and a biscuit'

Graham's trash-talking dates back to his days at Michigan, but it has ramped up and gotten more colorful over the years. He used to curse a lot at his opponents, he said, before the NFL started levying fines. That forced him to be more creative in the way he, um, communicates.

During the Eagles' Super Bowl run in 2017, he began wrapping his messaging around food and acting like offensive tackles were trying to keep a hungry man from his meal.

Our latest episode of Audible is extra spicy.

"I'd say, 'I know you're all about to give up that three piece and a biscuit.' That means three sacks. They know what I'm talking about. I'm only talking sacks when I'm talking out there," Graham said. "Then it went to one year when all the Popeyes chicken sandwiches was hot and everybody wanted one and it was hard to get one. And so I was like, 'Oh, I know y'all boys got them boys hiding. I know you've got a couple for me. Y'all are fat boys.'"

Even his own teammates aren't safe. Graham attacks practice the same way he does a game, peppering his counterparts from the moment he steps onto the field.

"Aw, mate. The one thing he says is, 'Fat boy!' He calls everyone fat boy," said Eagles tackle Jordan Mailata, the former Australian rugby player. "The smack talk is like every day at practice, even when we're stretching. We'll be stretching and he'll just walk past like, 'Yeeaahhh! Yeah fat boy, I'm coming today!' I'm like, 'Come on, BG, man give us a break. We're just trying to stretch.'"

Linemen are "fat boys." Running backs are "little guys." If an opponent's tape is weak, he'll tell them straight up, adding, "I'm not worried about you. I know I'm going to get me a couple on you!"

And yet Graham rarely gets in skirmishes and could think of only one instance when he believed in-game jousting could have spilled over to something more serious off the field, and that was with former tight end and fellow button-pusher Martellus Bennett of the New York Giants in 2012.

Everything Graham says, he says with a smile and in a friendly tone. He's regarded as one of the league's nicest guys, which makes his smack talk all the harder to process.

"He seems like he's being nice, but he's also talking trash. And that's like, kind of a mind you-know-what for those big guys," former Eagles defensive end Chris Long said. "I might cuss them out and have an angry look on my face, but the BG thing, it throws you off, like, 'How you doing big man?' with a big smile on his face. 'Yeah, I'm gonna get after you today!' And it's with a smile. And it just doesn't stop the whole game. And eventually, it's pretty intimidating because they're like, 'What's wrong with this guy?'"

Former Giants offensive lineman Geoff Schwartz says Graham is vocal and loud. "I don't know if he talks s--- or just talks all game. Playing guys like Brandon is fun because when you go back and forth all game, defenders that talk like that, they also acknowledge when you get 'em. So it's kind of fun to have that back and forth."

Method to the talk

Graham's loquaciousness is mostly a product of his passion for the game -- and for life, really -- but there is some intentionality to it.

If he learns his opponent is thrown off by trash talk, he'll go all-in. That was the case with Seattle Seahawks tackle Duane Brown, who was teammates with Eagles guard Brandon Brooks when they were with the Houston Texans. Brooks tipped Graham off he could use his words to get in Brown's head, so Graham obliged.

Listen in on Brandon Graham. who was mic'd up for last week's game. #FlyEaglesFly pic.twitter.com/MTWAhiD61a

"Nothing. Just talked stuff," said Graham when asked what he said to Brown. "Like, 'Man, you're weak. I'm about to whoop on you today.' Just be real nonchalant about it like, 'I appreciate you, man. I appreciate these three sacks you're about to give me today. ... You're garbage.'

"You figure out little points. Like [Giants wide receiver] Golden Tate, he's got bad body language. Some guys, they're going to tell you exactly how they feel. Like Dez [Bryant] used to have bad body language. He'll get to talking and say something that let's you know, like, 'Yeah, we've got him.'"

There's always been an edge to Graham's game, sharpened by criticism he received early in his career. A first-round pick by the Eagles in 2010, he was slow out of the gate due in part to injury and was labeled a bust. Graham has since climbed up to fourth all-time on the Eagles' sack list (58), has turned into a central team leader, and is the author of the most consequential play in the organization's history -- the strip sack of Tom Brady in Super Bowl LII to help secure the city's first Vince Lombardi Trophy.

"He deserved to make that play," Long said, "for all the plays he made along the way and the sacrifices he's made and everything that has transpired in his career in Philly. I think if anybody was gonna make that play, it was him.

"What stands out to me was just kind of the poetic justice there of this guy who's been kind of a glue guy, and he's super underrated around the league, and he's becoming an all-time important Eagle right in front of our eyes, right? F--- the accolades because Pro Bowls don't really mean anything. Like, ask an Eagles fan if Brandon Graham is one of the most important Eagles of all time. He made one of the most important plays of all time, and that made sense."

For all the verbosity, Graham was succinct in his trash talk to Brady after the epic play, telling the fellow Michigan alum: "Good seeing you! Go Blue!"