PITTSBURGH -- The Pittsburgh Steelers didn't have to talk themselves into drafting Mason Rudolph. The voices in the halls of Oklahoma State's campus told them to do it.

"They come up to you and, man for man or janitor to janitor, and they're grabbing you and saying 'Man, this is the salt of the earth. This is one of these type of dudes.' That's exciting," offensive coordinator Randy Fichtner said. 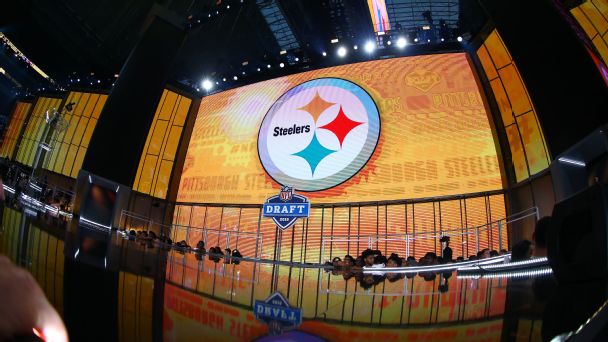 So Pittsburgh made the "dude" one of the its most important third-round picks in recent history.

Tom Brady was 36 years old when the New England Patriots selected Jimmy Garoppolo in the second round of the 2014 draft. Four years later, Ben Roethlisberger is 36 and will have a player the Steelers considered a first-round talent inside his quarterback room.

Brady played long enough to force Garoppolo to San Francisco in a trade that affected the Patriots' future plans. The Steelers would love to be faced with such a problem. They'd gladly sign up for Roethlisberger playing another four years, and Roethlisberger himself told the Pittsburgh Post-Gazette that he’s eyeing another three to five seasons, barring injury.

To be sure, Rudolph one day flashing a Hollywood smile at a media conference announcing a $137.5 million contract, like Garoppolo, is hardly a guarantee. He's a third-round pick that at least one NFL draft evaluation compares to Christian Ponder.

But the presence of Rudolph has deepened the intrigue of a Pittsburgh quarterback lineage that features one Hall of Famer (Terry Bradshaw) and another destined for a bust in Canton, Ohio.

This feels weightier than last year's fourth-round selection of Josh Dobbs, who is talented but considered raw. The Steelers have begun drawing the walls and doors of a succession blueprint. They believe Rudolph's ability to anticipate throws is next-level good.

Rudolph -- described as a devout Christian and obsessive about football prep -- will be ready. In fact, he prayed for this.

"I've gotta believe he would embrace the job and hang onto it as long as those two did if the opportunity presented itself in the future," said Brett Rudolph, Mason's father.

Exactly what to expect from Rudolph is tough to decipher because of the draft's quarterback dynamic. Many around the league considered Rudolph the sixth-best quarterback behind Baker Mayfield, Sam Darnold, Josh Allen, Josh Rosen and Lamar Jackson. The Steelers disagreed, with general manager Kevin Colbert revealing Rudolph ranked as high on his board as the others.

Rudolph can point to 13,618 reasons why he disagrees, one for each record-breaking yard at Oklahoma State, which ran a vertical passing offense suited to Rudolph's skill set.

"It'll stick with me every minute of every hour from here going forward until the day I die," Rudolph said about being labeled as a second-tier quarterback in the draft process.

Rudolph is the son of an asset manager for a real estate investment firm, a private-school-educated child until the sixth grade. He attended a Christian private school before joining Northwestern High School and football powerhouse Rock Hill (South Carolina) to see how he stacked up, converting from receiver to quarterback after coaches saw the natural arm talent and mental makeup for the position.

When Rudolph isn't commanding a huddle, he's commanding living rooms by organizing family activities. His strong personality comes out in both settings, his father says.

"Doesn't ever seem to be satisfied," Brett said. "I've told him that you'll have plenty of years later on to do things you couldn't do as an NFL player, but have no regrets. He's been pretty obsessive about being as good as he can be."

Rudolph had hoped to go higher than 76th overall but also prioritized fit. Teams that showed the most interest had aging quarterbacks: Patriots, Saints, Chargers among them.

None of those drafted a quarterback, but five teams in the first round did, which was hard for Rudolph. Privately, he felt his pro-style quarterbacking and ability to keep his eyes downfield and deliver would erase concerns.

Now he knows only one thing to do.

"Prepare like I'm the starter whether that's the case or not," Rudolph said.

Between Cowboys practices and film sessions, Rudolph would corral a few young assistant coaches and run through every call sheet, review signals, where plays came from -- "football gymnastics," as offensive coordinator Mike Yurcich calls it.

One 10-play script might take 30 minutes when reviewing each variation or coverage possibility.

"He's the kind of guy you want to go to work with and go to a heated battle with because you know he's done everything in his capability to handle the moment he's stepping into," Yurcich said.

Work ethic is great, but Rudolph might log overtime to conquer the "system" stigma that exists with offenses in the Big 12, where passing windows are bigger than NFL cornerbacks allow.

That stigma irks Yurcich, who got a four-year close-up at a quarterback with the best "sniper's mentality" he has ever seen -- the ability to wait for plays to develop, eyes downfield, while a pass rusher closes in. Rudolph slides in the pocket at a "masterful" level, Yurcich said, has flawless weight transfer on deep balls and punishes intermediate zones. He concedes Rudolph's ability to throw on the run is "average," but adds Rudolph can improve in that area because he's not a bad athlete (4.9 40 time at the combine).

The way he sees it, a Big 12 offense should be the least of the NFL's concern when top-10 picks the past two years (Baker Mayfield, Patrick Mahomes) quarterbacked in the Big 12 and Andy Reid, a West Coast offense disciple, giddily schemes up Big 12-style concepts each Sunday.

Rudolph points out he had vast control of OSU's offense, pre- and post-snap, which will help him learn at the NFL level. He has already met with Fichtner over the weekend to talk football, Brett said.

The Steelers should feel like they got a first-round pick, Yurcich said, because that's where he belonged.

"It boggles my mind," Yurcich said about Rudolph not being grouped with the quarterbacks ahead of him. "I think it's a slap in the face."

Not Big Ben's job to teach me

The Steelers aren't about to cast Roethlisberger aside. He was one of the league's hottest quarterbacks at season's end, averaging 346 yards per game over his last seven games in 2017.

Center Maurkice Pouncey told ESPN that Roethlisberger wants to play another three years, which would necessitate an update on a contract expiring in 2020.

Drafting a quarterback in the third round allows the Steelers to invest in the future without mortgaging the present. The pick isn't high enough to put the starter on some sort of notice unnecessarily, and the backup quarterback dynamic just got more interesting. Landry Jones is in the final year of his contract, and Dobbs has barely played. He'll want a chance.

"I know you can’t keep four, but any coach is going to say 'give me as much talent as you possibly can,'" said Fichtner, a former quarterbacks coach promoted in January after the team did not renew Todd Haley's contract. "I am going to be excited as hell about this. I keep my fingers crossed that [Roethlisberger] will play as long as, Lord willing, he’s healthy and that he wants to play. That’d be awesome and that’d be great for us. … If it takes three guys in competition to replace him some day, then so be it, and what a better position to be in right now and to keep developing quarterbacks."

That leaves Rudolph seeking a sweet spot between confidence and patience. Rudolph calls himself "competitive to the bone" and would love to play but also sees the value in development.

His reps will be limited to organized team activities, training camp, possibly a preseason start and no guarantees after that.

All this would be new for a player who has long admired Roethlisberger's game but plans to create his own NFL identity.

"It’s not Ben [Roethlisberger's] job to teach me anything. It’s my job to learn and that is the way I am going to look at it," Rudolph said. "Obviously, you’re sitting behind an unbelievable player and a good dude, so we’ll just kind of take it day by day and try to learn what I can each and every day."