PITTSBURGH -- Sitting beside a larger-than-life chocolate-brown teddy bear, quarterback Dwayne Haskins held a microphone in one hand and balanced a children’s book in the other.

He was surrounded by students at Fulton Elementary, a public school 5 miles from the Pittsburgh Steelers’ practice facility, for Read Across America Day in early March. The students stared, rapt as the quarterback read aloud and paused to show the auditorium the illustrations before he turned the page.

When he finished, the kids eagerly raised their hands, jumping at the opportunity to ask a real life Steeler a question. One by one, the kids walked up to Haskins, who wore his black and gold No. 3 jersey over a maroon sweat suit, and asked him a question into the microphone. He answered every student, even hugging one as she threw her arms around him.

A month later, his promising life was cut short when a dump truck struck him as he attempted to cross I-595 in South Florida early Saturday morning. 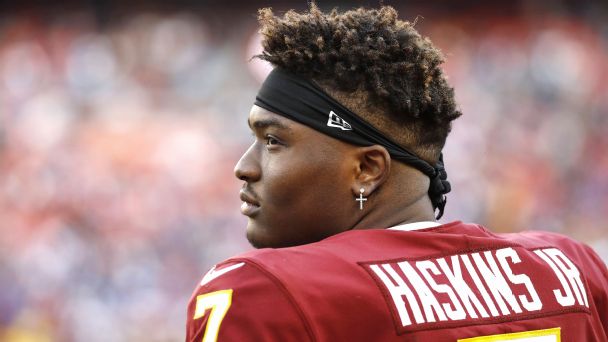 Haskins spent 15 months in Pittsburgh, a place he hoped would bring a fresh start and a second chance. It wasn’t just about jump-starting an NFL career. It was about focusing on the things that were truly important to Haskins: being a good teammate, finding his voice as a leader, having a positive influence in the community, growing into the person he wanted to be.

“I feel like I’ve grown a lot,” Haskins said during training camp last August. “Just being a mature person, it takes a lot of work. It’s very easy to go back to doing easy stuff as a kid. I have to try and be an adult and lead other men. I feel like earning respect is something I’ve been trying to do since I got here as far as getting here early, staying late, meeting with coaches, watching more film, spending time throwing with guys, talking to guys at lunch I don’t normally talk to every day. Small things like that where I can just help make the guys around me play for me.”

Haskins’ impact in Pittsburgh can’t be measured in a stat line. He was active for one game and never played a snap. But even if he had, that’s not what was important. That’s not what defined his time as a Steeler.

Instead, it’s what he did away from the field.

Haskins was a fixture at Steelers’ community outreach events, volunteering his time to help others in his new home. He jumped in right away, helping to hand out backpacks, school supplies and hygiene kits at a Pittsburgh public schools back-to-school event. Through the Salvation Army’s Project Bundle Up initiative a couple of months later, Haskins and eight teammates took a group of local kids shopping for winter gear at Dick’s Sporting Goods. In December, he delivered Christmas gifts, food, shoes, socks and health care items to Pittsburgh organizations and the Convoy of Hope for Huddle for the Holidays.

“He quickly became part of our Steelers family upon his arrival in Pittsburgh and was one of our hardest workers, both on the field and in our community,” coach Mike Tomlin said in a statement after Haskins’ death. “Dwayne was a great teammate, but even more so a tremendous friend to so many.”

At 24 years old, Haskins had so much life left to live. But he also experienced and lived so much in such a short amount of time.

A childhood football prodigy with otherworldly natural ability, he landed at Ohio State where he shattered long-standing records. Haskins was a Heisman Trophy finalist before being drafted in the first round by his hometown team, the Washington Commanders. After a tumultuous introduction to the NFL, he was given a second chance in Pittsburgh.

Haskins was not perfect, and there were many layers to his personality. But at his core, he wanted to make others happy, and be a positive force in his community.

The same day he went to Fulton, Haskins and long-snapper Christian Kuntz stopped by Pittsburgh Arlington, a pre-K through eighth grade school near Pittsburgh’s south side.

“After reading a story to our students called 'Ruby Has a Worry,' Dwayne shared some of the worries he has faced throughout his life and how he dealt with them," acting principal Colleen Smith said. "Dwayne complimented and encouraged every student that came up on stage to ask him a question."

After reading to the elementary school students, Haskins visited an eighth-grade algebra class and helped students learn concepts by working them out on the whiteboard.

"Dwayne was genuine, caring and so impactful to our students in the short time with him," Smith said. "We are forever grateful to have had the opportunity to meet him."

To another group of young students at Fulton last month, Haskins read from "You Can Do It!," a kids book written by former NFL coach Tony Dungy. In it, Dungy’s little brother Linden is having a tough day in third grade. The youngest in the Dungy family, Linden is frustrated because he hasn’t found his special talent yet.

All Linden knows, Haskins read to the class, is that he wants to make people happy. With some help, Linden learns throughout the course of the book that he can do anything.

Like Linden, Haskins was in the midst of figuring things out for himself. But along the way, he worked to make people happy as he made the most of his second chance until his journey ended abruptly and inconceivably on a highway in Florida.

“I still think I’ve got a ways to go,” Haskins said in August. “But as far as being comfortable in my own skin, I feel like I’ve done that. Learning not only the coaches, but the players and the weight room coaches, the scouts, the guys in the building. Because being a quarterback, it’s very important working with guys around you, getting them to believe in you.

“From where I’m at now to where I was when I first got here, I just feel like I’m growing into who I want to be.”