Marlins owner Jeffrey Loria respects his team’s fans in the same way that a vulture respects a monkey funeral. For years he’s been their nemesis, cruelly plotting against their interests and delighting in their terrible shrieks.

This offseason, he atom-bombed what little hope the fans had by callously gutting the team’s high-profile roster, restocking it with whatever was on clearance.

The Marlins of 2013: Ticked off Giancarlo Stanton, a few guys who don’t have Wikipedia pages, a Roomba with a baseball glove taped to it, winner of the “What being a Miami Marlin means to me” essay contest, a can of Fresca with googly eyes

It’s depressing, and Loria realizes this, which is why on Sunday he put out a full-page ad in three South Florida newspapers, in which he pretended to accept responsibility but then went on to blame pretty much every other force in the universe, from the players to the media to gremlins to Firefox updates to this old-timey picture of people playing pingpong with a shark. Everything.

The fans, of course, didn’t buy it. They need something more, something cathartic, to help offset all the many ways that they’ve been wronged. So, to further the healing process, I thought it might be worthwhile to indulge in a little bit of revenge fantasy, to imagine what it would be like if the fans had the chance to actually battle Loria.

So let’s do it. Let’s have a battle. But first, let’s go to the tale of the tape.

Size: Roughly that of the grandma from “Dinosaurs”

Weaknesses: Very old, wears glasses, would probably get stuck on his back like a turtle if you toppled him

Power move: Slapping you with a paper fan till you go get him an espresso

Size: Varied, but definitely the slimmest fan base in the NL East

Strengths: Lots of pent-up rage, they hold a clear numbers advantage, have capably survived dozens of Pitbull concerts over the years

Nickname: The Fightin’ Fish Fans (it’s lame, but someone’s overexcited dad came up with it and no one had the heart to tell him no)

Power move: Pelting you into a coma with stale jumbo pretzels

Seems like a closely matched contest. Let’s get this thing started.

The battle begins outside Marlins Park, where approximately 73 fans have amassed. Many are wearing black socks with sandals, and all of them look mad.

One fan with a megaphone steps forward and demands that Loria come outside for a brawl.

There is a long, tense silence, though it is occasionally interrupted by the sounds of a homeless guy practicing the Flintstones song on a saxophone. Then, after several minutes, the stadium loudspeakers crackle to life with Loria’s dull, condescending voice.

“Greetings, Marlins fans. I didn’t hear you at first, as I was lathering myself with the gold coins that your parking and ticket revenues afforded me. If you want to battle, that’s fine, but first you must face the wrath of Juan.”

Seconds later, the stadium gates fly open, and recently acquired speedster Juan Pierre catapults toward the fans, brandishing a bright yellow Wiffle Ball bat. Like a fly hyped on bath salts, he darts from fan to fan, thwacking their calves with his sinister weapon.

“Dude, what the heck, that kind of stings a little,” a man cries.

Pierre’s thwacking spree continues for six more chaotic minutes until several fans manage to subdue him with squirt guns. They strap him into a Johnny Jump Up to keep him from attacking again.

Undeterred by the pink marks on their legs, the fans storm into the stadium.

They move through the concourse and down into the 100 level behind home plate, where they’re met by a menacing sight: the Tommy Bahama Decepticon home run sculpture that Loria installed in center field is now standing before them on robotic legs, and it appears intent on destruction.

“Fine art is subjective,” sneers Loria from the loudspeaker. “When I look at this sculpture, I see home runs, but I’d imagine all you’ll see is your own impending doom. Ha-ha-ha-ha-ha, farewell, losers!”

The sculpture begins hurling lawn ornaments at a machine-gun clip, incapacitating fans with grim precision. In mere seconds, half of the fans are writhing on the ground, staring in horror at the welts raised by the nightmarish barrage of plastic flamingos. Loria is cackling hysterically over the loudspeaker, as the defeat of the fans is imminent.

But then a savior arrives. It’s Giancarlo Stanton.

Stanton tosses up a ball and crushes it over the left field wall, forcing the sculpture to abruptly switch from destruction mode to home run celebration mode. The monstrous kill-bot lights up like a chintzy pinball machine and blasts happy toots of water in acknowledgement of Stanton’s feat.

“You guys go ahead and I’ll keep hitting dingers,” the outfielder tells the fans. “It’s time for Loria’s tyranny to come to an end.”

The 16 fans that are still standing charge toward center field, where Loria is now stationed atop a coral-themed throne, smirking calmly.

“I’m impressed,” he wheezes. “I didn’t think you’d make it this far. But I’m afraid your little uprising ends here, as I’ve painted a painting so magnificently terrifying that anyone who looks upon it is instantly rendered to stone. Behold!” 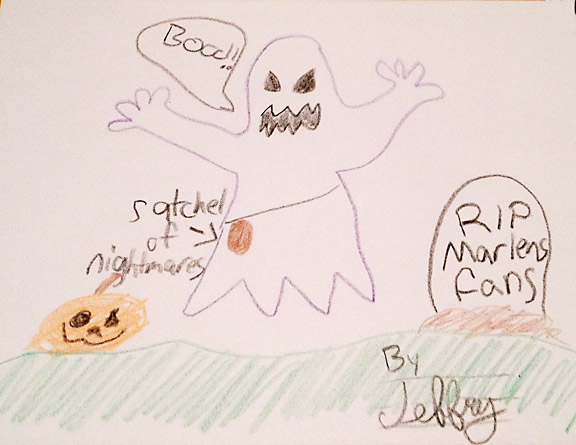 The fans, though momentarily stupefied, are not turned into stone, and to Loria’s horror, they push him to the ground and descend on him with savage intent.

But then a voice shouts from the back of the mob: “Wait!”

It’s an old blind man in a Marlins jersey, his frail body hunched forward like a dried-up cocktail shrimp. The fans clear a path as he slowly steps forward.

“Jeffrey,” the old man whispers. “Care for these people. Care for this community. Stop being such an insufferable dingus. It’s time for you to become a fan.”

The old man extends his hand and helps Loria to his feet. For a moment, it appears as if the owner might be crying, but it turns out he’s actually laughing maniacally.

It is revealed that Loria has triggered his secret Life Alert necklace that the U.S. government distributes to its citizens in the highest tax bracket. An alarm goes off at the Pentagon signaling that a rich guy is in peril, and instantly a Special Forces unit zip-lines in from the roof of the stadium and rescues Loria from the fans.

There is tremendous disappointment among the Marlins faithful, as it seems that, just as always, the guy with the most money has come out on top.

But the old blind man is smiling. He divulges that he was able to work his gnarled fingers into Loria’s pocket and snatch his wallet before he made his cowardly escape.

“Looks like the Marlins are treating us all to pizza tonight!” the old man guffaws.

High-fives abound. The fans hijack a team bus and make a beeline for Pizza Hut. No expense is spared. Specialty pizzas, side salads, chocolate dunkers, P’Zones -- you name it. Stanton even stops by to autograph their breadsticks. It is the greatest time that anyone has ever had.