Forty-one years ago this month, my father took me to a Mets-Giants game at Shea Stadium, and I still have the ticket stub to prove it. I was seven years old, and I studied every square micron of that stub, even all the fine print legal disclaimers on the back. But I knew right away what I liked best about it: the raincheck illustration of Mr. Met and his umbrella.

I've always loved Mr. Met. Not the live mascot (I've never really cared about him), but the cartoon character -- I grew up thinking he was the coolest. I loved his sense of playfulness. I loved how he looked clever and smart, sort of like Bugs Bunny. I loved how his pupils were little baseball diamonds (bet you didn't know that, did ya?). I loved how he always wore an orange-brimmed cap, even though the Mets have never worn an orange-brimmed cap (it was his special Mr. Met cap that only he got to wear!). I still love all of these things today.

Mr. Met, who made his first appearance on the cover of the team's 1963 yearbook (the live mascot debuted a year later), was clearly the work of a talented illustrator, but I didn't think about that when I was growing up. And by the time I did think about it, it was too late: The Mets no longer have any records of who created him -- believe me, I've asked -- and there's no illustration credit for any of the program or yearbook covers he appears on. (The ’63 yearbook included a whole page introducing Mr. Met and mentioned that he was the product of "hundreds of drawings" but made no mention of the artist. Grrrrrr.) Two years ago I even put out a signal flare here on ESPN.com, asking readers to help me find Mr. Met's creator. That resulted in a few leads, but none of them panned out.

More recently, however, someone connected to Mr. Met's past saw that signal flare, and today I'm happy to report that I've solved the mystery -- sort of. Or maybe I've deepened it. You know the cliché about success having many fathers? It turns out Mr. Met has at least two fathers himself. I've now found one of them.

Parsippany, N.J., is a comfortable suburban town about 30 miles west of New York City. One of its more interesting residents is Charles Palminteri, a retired advertising art director and graphic designer. Now 80 years old, Palminteri has settled into the role of a fine artist, and he appears to be as creative as ever, turning out sports paintings, bold abstract acrylics and sculptures made from recycled TV and computer parts.

Fifty-some years ago, Palminteri worked for the powerhouse Manhattan ad agency J. Walter Thompson ("It was a lot like 'Mad Men,'" he says). It was there, probably in 1961 -- he's no longer sure of the exact date -- that he was assigned to create a symbol or character for an ad campaign for Rheingold beer, which had signed on as a sponsor of New York's new baseball team, the Mets.

Palminteri had grown up in Brooklyn, where he'd pitched and played shortstop for various teams and rooted for the Dodgers. He had also produced a comic strip back in the 1950s. So the idea of a baseball-themed cartoon character came naturally to him.

"I thought rather than a human being, I'd do something that looks humanoid," he recalls. "What's more natural than a ball for a head? I put some stitches on him, and a hat, and there you are. I did the sketches and submitted copies of them to a man from WOR [the Mets' TV station at the time], and I was told he gave them to Rheingold. I never heard any feedback or response, and soon I forgot about the whole thing, because I had other accounts to work on. But here, I still have the originals, because I save everything ... "

He reaches over and hands me an old sketchbook. I open it and see a familiar character. Here, take a look. 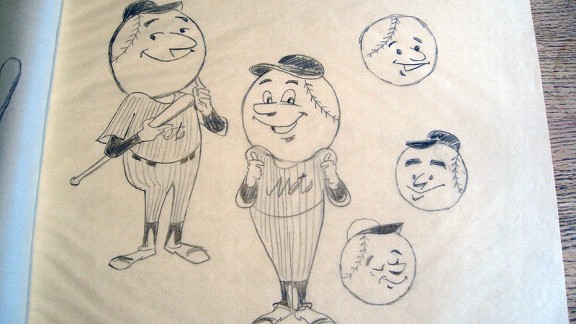 As you can see, Palminteri's original Mr. Met concept was much looser than the more stylized rendition that eventually appeared on yearbook covers and ticket stubs (although there are certain telltale similarities between both versions, including the consistent presence of only a single line of stitching on the head).

"How did you make the transition from the original sketches to the finished character?" I ask him.

"I didn't!" he replies. "I had nothing to do with those later versions. I had forgotten all about these sketches until a few years later, when I saw the Mets using this character. I thought, 'Oh, there's my guy!'"

It had never occurred to me that the artist who created the concept for Mr. Met and the artist who executed the finished illustrations might be two different people. But that's apparently the case.

Palminteri says he never gave his character a name ("I like the one they came up with, though"), and he doesn’t think Rheingold ever used his concept in an ad campaign. So how did his character evolve into Mr. Met? It would appear that there are two possibilities:

(1) Palminteri's sketches somehow found their way to the Mets' front office, where somebody decided to develop them into a team mascot character.

(2) Palminteri's sketches were discarded, and meanwhile someone with the Mets coincidentally came up with a similar design. A player with a ball for a head isn't such a radical concept, after all.

(There's also a third possibility, namely that Palminteri's story is bogus and that his sketches aren't really from the early 1960s, but that seems unlikely. While there's no way to verify his claims about Mr. Met, everything else about his career checks out, and he appears to be a gentleman of integrity.)

It's impossible to know which scenario took place, at least for now. WOR and Rheingold have both undergone multiple ownership changes and corporate relocations in the past half-century, so they have no records of an early 1960s ad campaign that never even came to fruition. And the Mets have no clue as to their mascot's lineage. Our best hope for finding out what happened -- and learning who drew the finished versions -- is for someone to come out of the woodwork after seeing this article.

As for Palminteri, he has no ax to grind with anyone. If his original drawings were in fact the basis for the mascot character, he's fine with that. He likes the finished versions ("Whoever the artist was, I think he did an excellent job"), and he isn't seeking any financial compensation.

He wouldn't mind a bit of acknowledgment, though. Much like Jerry Dior, the graphic designer who created MLB's silhouetted batter logo back in 1968 but didn't receive formal credit for the design until 2009, Palminteri would like to become part of the official historical record (if only so he can back up his claim when skeptics hear his story and then say, "Yeah, sure"). He's contacted the Mets a few times over the years, but they've never responded.

"They may have thought I wanted residuals or monetary credit, which I don't," he says. "But it would be nice if there were some kind of recognition."

That seems unlikely unless we can determine the identity of the missing mystery artist, and whether he or she used Palminteri's drawings as a starting point. Time is of the essence, though -- not only because any living links to the story are now getting on in years, but also because next season will mark the 50th anniversary of Mr. Met's debut on that 1963 yearbook cover. What better birthday present for Mr. Met than to let him meet his maker (or makers, as the case might be)?

Meanwhile, Palminteri has occasionally crossed paths with the live Mr. Met mascot. Whenever that happens, he has a simple message for the guy with the big head: "I tell him he's my offspring."

Paul Lukas encourages all Mets fans to share this article via social media, so we can finally get to the bottom of this mystery. If you liked this column, you'll probably like his daily Uni Watch website, plus you can follow him on Twitter and Facebook. Want to learn about his Uni Watch Membership Program, be added to his mailing list so you'll always know when a new column has been posted, or just ask him a question? Contact him here.