If it seems like there are more college bowl games every year, that’s all in your head -- after all, there have been 35 bowl games for the past three years.

But yes, it’s true, bowl games have been multiplying like fruit flies, more than doubling in number in the last 25 years.

Take a look at how the number of bowl games has grown since their humble beginnings with the Rose Bowl more than a century ago: 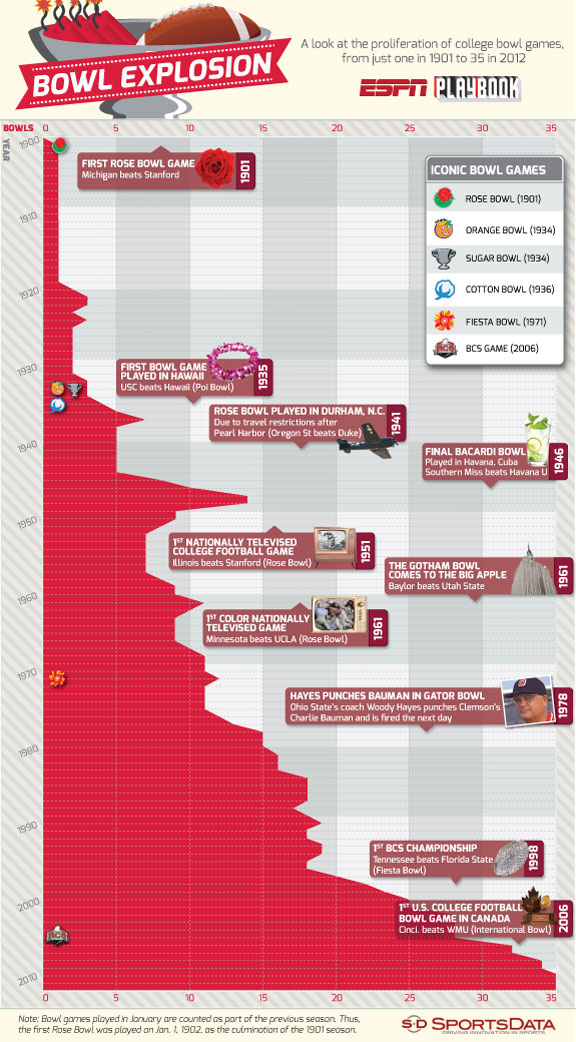 The reasons for the explosion in bowl games aren't 100 percent clear, but they probably involve some mix of the following factors:

• Sponsorship: Becoming the title sponsor of a bowl game doesn't guarantee an immediate bump to a company's bottom line, but more esoteric advantages like brand recognition can justify almost any investment. Head on down to your local Buffalo Wild Wings to check out the Buffalo Wild Wings Insight Bowl. Grab a Bloomin’ Onion and a Fosters as you watch the Outback Bowl. And would you have heard of Beef ‘O’ Brady’s if not for its eponymous bowl game? If not, well, now you have. Name recognition is huge in a competitive industry.

• Cable TV proliferation: It’s no coincidence that the number of bowl games spiked in the late 1980s and early '90s as more and more American households gained access to cable and satellite television. Bowl games provide quality, original programming throughout December, especially during the holidays when school and work commitments are on the back burner.

• College football’s popularity: What once was a regional sport has truly become a national powerhouse, thanks in large part to television and the Internet. Whereas a fan might once have followed just one team or conference, access to stories, stats, highlights and live games now makes it possible for a Florida Gators fan to hold an informed opinion on Oregon, or a Southern Cal follower to know Texas A&M inside and out.

And for all the complaining you might hear about so-called “meaningless” games, as long as fans keep turning out in droves -- either in the stadium or watching on TV -- this trend shows no signs of abating.