"I grew up playing poker, but I grew up playing five-card draw, seven stud," the stunning and infectiously personable actress said at the World Series of Poker this week. "I'm looking at them and saying, 'That's all the cards we get? We don't discard? I don't get to change my cards? That's it? You get what you get? It's the stupidest game I've ever seen.'"

That was three years ago. That was when Elizabeth was using the poker craze to hold fundraising events for her animal rescue group, Animal Avengers. Turned out, the more charity events she played, the more she took to it. 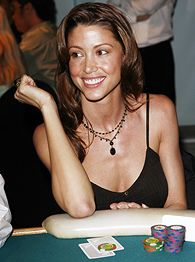 "As I learned all the psychology of it and the betting strategies, somewhere along the line, it was, 'Now I get it. Now I like it,'" she said.

Elizabeth had high-profile help along the way. No surprise there. When you're the sexy star who titillated males young and old around the world with your turn as Nadia the lustful exchange student in "American Pie," high-profile help comes to you.

"My original friends that helped me were Antonio [Esfandiari] and Phil Laak ['The Unabomer']," Elizabeth said. "They came over to my house, laid it all out for me. Phil came with Jennifer [Tilly, his actress-girlfriend who won a bracelet at the 2005 World Series]. A couple friends of mine brought them over. Lately, Joe Sebok has been helping me this World Series. Last year, Daniel Negreanu helped me a lot during the World Series. They're all really cool."

Evidently, they're all pretty good teachers, too, because Elizabeth cashed in the recent $1,000 buy-in no-limit hold 'em event.

Looks like the star of a Playboy pictorial several years ago is not just another pretty face at the poker table. This is not Paris Hilton catching whatever's hot. Elizabeth began play in the WSOP main event Saturday and was wearing evidence of her new sponsorship deal with Full Tilt Poker.

"Some days I have great days and think I'm awesome, and some days I think I suck," she said. "So much of it is hitting your cards and luck.

"Tennis -- I wanted to go pro," she said. "That's what I wanted to do with my life when I was in high school. I was going for my state ranking. That was what I loved to do. The only reason that I quit playing was I didn't like my high school coach. None of us did. She actually made a lot of us quit.

"I went through a phase where I'd mumble under my breath. I got penalized a couple times. Then I went through a phase where we all knew sign language and I got to the point where I could say things on my fingers really quickly. Nobody knew what I was saying; only I did, but it was my outlet. It absolutely worked for me, but my coach still penalized me for it. That's why I couldn't deal with her. I'm not hurting anyone. I'm not breaking any rules, but she would still penalize me."

Elizabeth's future changed when a production company rolled through town to shoot a music video and cast her in the piece. She later signed with a modeling agency but didn't think she was much good at it.

"When I was modeling, one of the best things I had done was an insert for Midol, as silly as that was," she said, laughing.

So, she moved into acting. Did she ever. After a number of TV parts, "American Pie" put her on the marquee. She would do "American Pie 2," of course, and delivered a wonderful performance in the spoof "Scary Movie."

But the role she's proudest of was her part in "Jay and Silent Bob Strike Back" in 2001.

"I'm definitely making a conscious effort to not play the same characters again. I did them once. I don't want to do them again. I don't need to play Nadia again in any other form or fashion. Not right now. Maybe 10 years from now, if I need to play her again, great."

Elizabeth just finished two poker movies -- "Deal" with Burt Reynolds and "The Grand" -- but she doesn't play a poker player in either one.

"I played a love interest of the kid Burt Reynolds is mentoring in 'Deal,' " she said. "I have a film coming up in the next month or two. I can't say what it is because the deal hasn't been finished. Originally, it was going to start shooting at the end of July, and I'm like, 'Nope. Can't do it because of the World Series.' It's actually been pushed to August for me."

At the poker table, Elizabeth smiles and laughs a lot and is delightfully chatty, but this being poker, you never know if the actress is acting or if it's Shannon being Shannon.

"It's both," she said. "I've found that when I go into a serious mode, sunglasses on, don't talk to anybody, I don't have as good a karma. Every time I'm chatty and happy and make friends at the table, I always have a better game. Cards come better. I do what I want more. Maybe they're not gunning for me, I don't know. I feel like the energy around me makes me better.

"I'm very spiritual. I'm very much a believer in luck and karma and energy and your aura and all that stuff. I have an acupuncturist I go to and every time she clears my energy, she tells me to ground myself. She kind of puts me in a meditative space, so if I haven't done it on my own, she makes me do it.

"I always sage before an event. Basically, you light sage, a dried leaf, and burn it out. The smoke clears your energy. Everybody has people who watch over them -- their guides, their guardian angels -- and all these people have all this energy going on and it gets mixed up when you're in big crowds of people and they're affecting your energy and you go home and they're still affecting you. This helps clear your energy, brings you back to you. You start fresh.

"Whether you believe in that or believe that believing in something helps, as long as everybody has something they believe in, as long as it's a catalyst for calming you down, that's all that matters."

In last year's main event, Elizabeth had enough good energy to make it to Day 2.

"If I can get halfway through Day 2 this year, I'm doing better than last year," she said. "I play a lot more aggressive now. My game is very different. I'd like to do well, have good energy, get some good cards, win some money. But you just never know."