Since Black Friday, or even the passage of the UIGEA years before that, players and fans gather before the start of the WSOP and wonder if the game's time in the spotlight has permanently passed by. Contrary to that sentiment, the WSOP boasts record numbers year after year, but for one valid reason or another (there are many), doubt fills the consciousness and makes me, and probably many others, ask every May if the players will show up for another stint in Vegas. If you build it, will they come?

After 10 days of the 2013 World Series of Poker, I echo the words of Papi on DLHQ and say I am very intrigued. The Rio has been filled with a rejuvenation of the game, a feeling of excitement, and has crowned 10 first-time winners out of the 11 champions. Sure, there have been field sizes this year that fell short, but unfathomable turnouts, like the one witnessed in the Millionaire Maker, prove that the game is alive and well on even the smallest scale. Getting more than 5,000 players to enter that event solidified in my mind that there are still those who dream of poker success while playing at their home games and not just the small circle of professionals who travel the circuit and, as Brad Willis put it recently, just take each other's money. Those are the players who can keep the economy alive and the WSOP thriving. Poker is still a game for the masses, and the WSOP, unlike any other tour or venue, can put the game on a pedestal and prove to all that we, as an industry, aren't going anywhere. 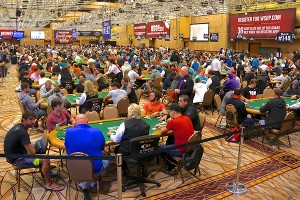 Among the masses in competition this year is Olympic great Michael Phelps. He made Day 2 in his first event.

I'd love to put up a table that offered side-by-side comparisons of turnout so I can support my statement with ease, but what the WSOP has done is optimized its schedule and shifted events around, which essentially makes comparison impossible. For example, the $5,000 no-limit Event 2 managed a field of 481 players, a disastrous result when you compare it to last year's 1,001 in the same event. The key difference is that last year's $5,000 took place right before the main event and capitalized on the influx of players. The best way to look at year-over-year turnout is the weekend events, but nothing from last year can compare to the Millionaire Maker.

Highlighting the eight-game struggles is important, as it fell to 388 players from 477 in 2012. Timing may have played a role, but perhaps more important, the massive buy-in events that took place in Macau isolated a good number of pros who would play in this event. Similarly, the ISPT offered a conflict with the WSOP and attracted WSOP regulars like Michael Mizrachi, forcing them to miss the first dozen events. As a result, the player base may have been smaller during the first week.

Now that those events are over, the WSOP once again has no competition and will hope to get back on track even in the lesser-played variations.

Some other general thoughts from the Series so far:

Small blinds: Germany’s Niklas Heinecker won the GDAM (approximately $130,000 buy-in) for $4.4 million. In that event, eight players, including Sorel Mizzi, Jeff Rossiter and Haxton, were paid at least $772,870. Ninth place got zilch. Talk about a huge bubble. ... Ultimate Poker has signed a number of pros to its roster, including Jason Somerville, Jonathan Little, William Reynolds and Lauren Kling. It has also been active promoting bounties and bonuses for players in Nevada. ... WSOP.com has announced the WSOP.com Online Championships and the Online Nine. The tournament series will take place in October, and the winners will become part of the Online Nine that will play out the final table in person before the final table in November. ... A bill has been introduced in the U.S. Congress that would legalize online gambling. The bill looks similar to what we've seen in the past and will have a difficult time moving forward. That said, at least there's movement in the fight for legalized federal online poker. ... Jakub Michalak won the aforementioned International Stadiums Poker Tour event. Tournament organizers had to add more than a half million euros to the prize pool to cover their guarantee. ... Eric Crain will enter the final table of Event 12 as the chip leader days after he entered the Event 8 final table as the chip leader. He has placed himself in Player of the Year contention with his finishes thus far. ... After weeks of building the bad beat jackpot across the Caesars properties in Las Vegas, it was finally hit. The quad aces of Sarah Whang beat Robert Kopke's quad kings, and 107 players across the company's card rooms earned $5,982. For losing the hand, Kopke grabbed $182,952, and Whang's win was worth $91,447.