OKLAHOMA CITY -- The San Antonio Spurs led by 10 points at the end of the first quarter, when coach Gregg Popovich met on the court with TNT’s Craig Sager for his customary end-of-the-quarter interview.

“We play better when the ball moves,” Popovich said.

The Spurs certainly learned that the hard way in Game 4 of the Western Conference semifinals on Sunday. They fell to the Oklahoma City Thunder 111-97, missing a prime opportunity to head back to San Antonio on Tuesday with a two-game lead in the best-of-seven series. Instead, the series moves back to Texas tied at 2-2. The "beautiful basketball" Spurs finished the game with 12 assists on 40 made field goals, which works out to an assist on 30 percent of the team's makes. That number registers as the team’s lowest assist percentage since 1987, when the Spurs assisted on 28.9 percent of their buckets against the Sacramento Kings, according to research from ESPN Stats & Information.

“Yeah, a little bit,” said Parker, who followed a vintage Game 3 performance with another gem, scoring a team-high 22 points on 10-of-16 shooting to go with three assists. “They have done a good job covering our shooters. Usually, our team has a lot of assists, a lot of hockey assists. But they are doing a good job of recovering and being in the passing lanes. And right now, we just have to do a better job of moving the ball even more.”

More than half of San Antonio’s field goal attempts in Game 4 came after only one pass or fewer, which ranks as the team’s highest in a game so far in this series. When the Spurs did manage to get off a shot from a pass in Game 4, they connected on just 36.4 percent of those attempts, which ranks as the worst for the team this postseason.

Through San Antonio’s first seven games of the postseason, the Spurs scored 54.7 points per game on shots directly off passes, but on Sunday, they poured in 26 off such attempts, according to ESPN Stats & Information research.

They also connected on just 2 of 12 attempts from 3-point range.

“We just missed some shots as well off some good passes,” said Kawhi Leonard, who scored 21 points in addition to contributing four steals. “Obviously, we’re a team that prides itself on getting assists. So we’ve got to try to get some ball movement, and [we need] to get them moving a little more.”

Oklahoma City’s defense certainly deserves some of the credit here.

The Thunder limited San Antonio to its fewest catch-and-shoot looks in a game this entire postseason, and contested 14 of the Spurs’ 18 catch-and-shoot opportunities, according to ESPN Stats & Information research.

Oklahoma City contested just 28 of 69 catch-and-shoot situations during the first three games of the series.

While shutting down the Spurs on the defensive end, the Thunder also burned them with a sizzling night from Kevin Durant, who scored a game-high 41 points, not to mention an inspiring performance from reserve Dion Waiters (17 points).

Ball movement serves as a hallmark for San Antonio basketball. Its rough night in that department, however, was only one of several components leading to the team’s demise at Chesapeake Energy Arena. San Antonio pulled down just two defensive rebounds in the fourth quarter, while Oklahoma City hauled in five offensive boards.

The Spurs entered the fourth leading 81-77, only to watch the Thunder outscore them 34-16 down the stretch. Less than three minutes into the quarter, Oklahoma City took the lead on a Durant free throw, having gone on an 11-6 run to close the gap. 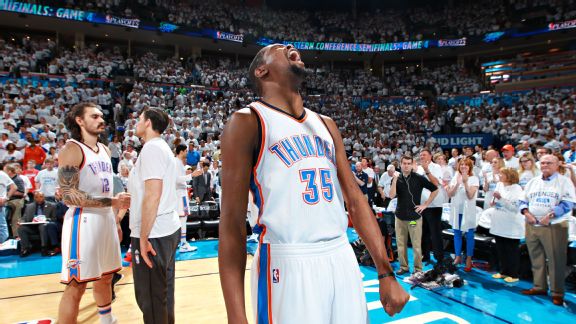 Kevin Durant lit up for 41 points in Game 4 to give the Oklahoma City Thunder the win and tie the series 2-2 with the San Antonio Spurs.
Box score »
Game highlights »
Fan reaction »
Game HQ »
2016 NBA Playoffs coverage »

Just 1:52 into the fourth quarter, Oklahoma City tied the game at 85 on back-to-back 3-pointers from Randy Foye and Enes Kanter.

“We were winning the game and in control, and then they made two big 3s with Foye and Kanter, and it was just not going our way,” Parker said.

Boris Diaw pointed to San Antonio’s defense as “the reason we lost tonight,” while Popovich added that “down the stretch, we made too many mistakes; just not remembering who we were guarding and how we wanted to play. But having said that, they out-toughed us. They battled us on the boards, and on top of that, they had some other players that joined in and made shots. It was a great job they did on the boards, out-toughing us, and Durant having a good night got them a game.”

“We wanted to get [a win] again tonight because I think we had a good opportunity,” reserve guard Manu Ginobili said. “We were up for a good part of the game. We couldn’t close it. So we’ve got to keep fighting. Nobody expected to sweep or have an easy series against a team like them. We’re going back home. We have home-court advantage. Hopefully, we take care of it.”