How does this team compare to all the other Spurs teams you’ve been a part of?

How great is this season the Spurs are having?

How do you feel about establishing a franchise record for victories?

Parker almost always answered those inquiries with some form of “none of it means anything unless we win a championship.”

We saw precisely why at Chesapeake Energy Arena on Thursday night, when San Antonio averted what could have been an embarrassing blowout with a valiant second-half effort only to fall 113-99 in Game 6 of the Western Conference semifinals to a hungrier and more athletic Oklahoma City Thunder squad.

“I’ve been in the NBA for 15 years and to the conference finals half of my career, five NBA Finals, and stuff is going to happen,” Parker said. “Sometimes, it’s not meant to be, and we have to give credit to OKC. They’re coming from far, the last year, getting all the injuries and bad luck. And this year, the basketball gods, they went their way. Every tough play, every big basket, they made it. We have to give them credit.”

The 113 points rank as the most given up by the Spurs in a regulation elimination loss under Spurs coach Gregg Popovich, as the Thunder flexed a major advantage in athleticism to capture this one. Oklahoma City outscored San Antonio 21-5 on the break and out-hustled the Spurs to loose balls, recovering 10 compared to three scooped up by the visitors, according to tracking by ESPN Stats & Information.

A horrid second quarter by the Spurs, in which Oklahoma City outscored them 30-12, allowed the home team to build a 28-point lead the visitors would cut to 11 in the fourth quarter with a gutsy, 25-8 run. That run said plenty about San Antonio’s prideful past, with players such as Tim Duncan, Manu Ginobili and Parker clawing hard until the end.

It also pointed to the culture deeply established in San Antonio that will be carried on by the new core of players such as Kawhi Leonard, LaMarcus Aldridge and Danny Green as well as promising youngsters such as Kyle Anderson and Boban Marjanovic, should he return.

“I couldn’t be more proud of the way we played in the second half tonight,” Popovich said. “They really showed their character. They didn’t hang their heads. They busted their fannies, and did as well as they possibly could.”

They could be doing it for quite a while, too, particularly the young core of Aldridge, Leonard and Green alongside the 33-year-old Parker. All four of their deals run at least through the 2017-18 season, with Leonard’s contract extending through 2018-19. All but Parker have a player option for the season following when those deals expire.

And it's almost a given the Spurs will add even more firepower in free agency over the summer.

Perhaps that’s why New Orleans Pelicans coach Alvin Gentry joked back in March that pundits “have said for 10 years that the Spurs’ championship window is closing.” Yet year after year, San Antonio remains in serious contention for titles as it brings in a few new role players as they phase out others. Veterans such as Duncan and Ginobili likely won’t make decisions about their futures until later in the summer. 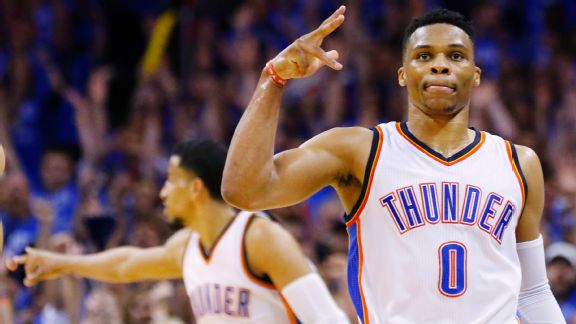 “We’ve accomplished amazing things. We won 67 games,” said Ginobili, 38. “And of course it’s disappointing when you don’t end up winning the last game. But only one team can do it. In 14 seasons, in my case, it’s happened a lot of times.”

Leonard led the team with 22 points and five assists, and wanted to capture a victory to force a Game 7 in San Antonio so the 40-year-old Duncan could play in front of the home crowd because “he’s been a great teammate to me; helped me grow up a lot throughout my years.”

Duncan characterized Thursday's loss as “one of those nights at the wrong time. Just one of those quarters at the wrong time. We always give credit to our opponents, and obviously, OKC turned it up there; turned our execution into just forced bad shots. Then we kind of trickled down from there and kind of snowballed. So we put ourselves in the hole. We actually played somewhat solid for the second half. But it was too little, too late.”

Maybe, but even with the disappointment that accompanies the Spurs' suffering elimination in Round 2, there should be optimism regarding the future as they’ve slowly put the pieces in place to remain competitive for a long time.

Sure, the Spurs became just the fourth team in NBA history to win at least 65 games in the regular season and fail to win the championship. But as Parker said over and over throughout the team’s historic regular season, none of the regular-season victories mean anything if it can’t win a title.

“Well, everybody is disappointed,” Popovich said. “The only team that is not disappointed is the last team standing. Everybody loses but one.”