Sure, the former San Francisco 49ers coach lifted the team to heights not seen in these parts since the heyday of the Team of the 80's dynasty, but, as seen throughout his career, Harbaugh has a short shelf life. Ask people at the University of San Diego or Stanford. On one hand, bringing in Harbaugh is like making a Faustian bargain for immediate success, damn the repercussions. On the other, many say only owner Jed York and general manager Trent Baalke could make Harbaugh out to be a sympathetic figure. Whatever the case, real or imagined, the acrimony between Harbaugh and the 49ers' front office led to a toxic atmosphere that began the downfall and dubious decision-making. Or have you forgotten offensive lineman Alex Boone's about-face, going from defending Harbaugh and calling him a "brother" last season to telling HBO this offseason that he wanted "to kick his ass" because Harbaugh drove the team too hard? Harbaugh's departure seemed to lift a dark cloud, but it also brought about upheaval in the coaching staff and too many questions to count about his successor, Jim Tomsula.

Maybe they saw it coming, or perhaps it was merely a perfect storm of timing. But this offseason's exodus of biblical proportions set the team back. Justin Smith retiring was somewhat expected, but the retirements of Chris Borland, Patrick Willis and Anthony Davis sent shock waves through the organization, if not the entire NFL. And with the likes of longtime standard bearers Frank Gore, the franchise's all-time leading rusher, receiver Michael Crabtree and left guard Mike Iupati leaving via free agency, along with both starting cornerbacks in Perrish Cox and Chris Culliver and linebacker Dan Skuta, not to mention the painful cut of Aldon Smith (which we'll get into later), and it seems the 49ers had to hit the restart button this summer. It's not as if San Francisco had plenty of first-string talent waiting in the wings. Poor drafting has also contributed to the roster overhaul. Since 2011, Baalke's first year as general manager, the 49ers have made 49 picks ... and only eight are currently starters for the team. And since 2012, the 49ers have drafted 22 players in the first four rounds, and just four of those players have played more than 50 percent of snaps this season -- free safety Eric Reid, defensive back Jimmie Ward, center Marcus Martin and running back Carlos Hyde.

While many saw Smith as being coddled by the 49ers throughout his arrest-filled tenure, there was no denying his All-Pro skills. Sure, he was helped out by having Justin Smith play next to him, but Smith did rack up 42 sacks in his first 43 games and was expected to be a cornerstone for the franchise. Then a nine-game suspension for general malfeasance to begin last season short-circuited that plan, and he was a shell of his former self when he returned. But he was happy and healthy this offseason ... until he again found legal trouble on the 49ers' first day off of training camp. With five arrests, including three for DUI, since 2011, San Francisco had no choice but to part ways with him. The 49ers have flipped veteran Ahmad Brooks from left outside linebacker to Smith's old pass-rushing spot on the right, but Brooks also has legal issues and has been away from the team the past week-plus in the wake of his sister's death. Smith's downfall, while a personal issue that led to Tomsula's passionate plea for those with substance problems to seek help, has also weakened the team's defense. Though maybe not as much as this: Since January 2012, the team has had 13 arrests or charges, per the San Diego Union Tribune's NFL arrests database.

It wasn't that long ago when ESPN NFL analyst Ron Jaworski was saying Kaepernick could be the best quarterback in NFL history. As such, Kaepernick's regression has been stunning. It has gone from trying to fit a square peg into a round hole to trying to boost his confidence in a game with short, safe passes near the line of scrimmage. When he took the league by storm, the dual threat could beat you either with his gazelle-like legs or his howitzer-like arm. But the 49ers are trying to make him more of a traditional pocket quarterback -- even his mentor last spring, Kurt Warner, is saying the team is asking Kaepenrick to do things he has never done before and to let him “grow” into the position. Kaepernick, though, is in his fifth NFL season, and he took over from Alex Smith midway through his second, so you would think the learning curve wouldn't be steep at this point. Before Sunday night's bounce-back effort at the New York Giants -- his 5.4 yards average depth of target was lower than every other quarterback but Aaron Rodgers' 5.0 on the day, per Pro Football Focus -- many were calling for the 49ers to bench him, what with PFF's -10.1 grade of Kaepernick ranking 37th of 38 qualifying quarterbacks. And while he appeared to regain the confidence of his two main receivers in Anquan Boldin and Torrey Smith, you have to wonder what effect Kaepenrick losing his personal protector in Harbaugh has had on him. Then again, one week after praising his former coach for teaching him the intricacies of the position at the pro level, he intimated Harbaugh asked him to do things out of his “character” before. 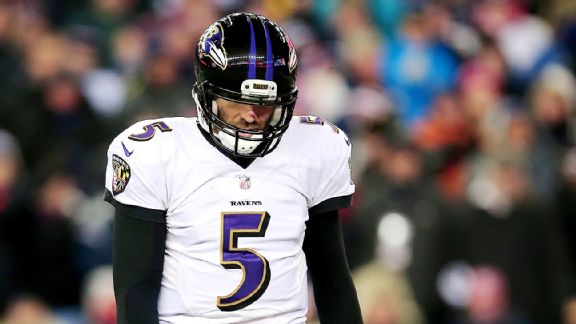 Injuries and the lack of playmakers on offense have conspired with other factors to leave Baltimore a shell of if its most recent Super Bowl team. Story

Not much tangible here, though, the team does appear to have lost its, well, soul in moving its operations some 38 miles south of their venerable Candlestick Park home in San Francisco to the Silicon Valley. Sure, the $1.3 billion Levi's Stadium is a jewel, a modern-day stadium masterpiece that will play host to Super Bowl 50 on Feb. 7, but the antiseptic feel gives little in terms of a true home-field advantage. Not when practically the entire east side of the stadium, which bakes in the sun, is devoid of fans, who have sought shelter from heat, which is much worse than at the 'Stick, when fans could stay inside for all the shiny bells and whistles after halftime. Then there's the seeming constant fighting, real or imagined, with the denizens that seem to distract from the mission of winning games, though doing it with class, per York. Whether it's a report of airplane pilots coming in and out of nearby San Jose airport complaining of the Levi's Stadium lights distracting them; fights in the stands, bathrooms and parking lots; parking egress and ingress issues; soccer parents crying foul over the fields next door or even the fans fleeing by selling their season tickets in relatively huge numbers, there is a noticeable difference in the atmosphere. Then there's this: The 49ers' 76-point fall to No. 103 in the ESPN Ultimate Standings project is by far the biggest drop of any team. Coincidence or karma?