SANTA CLARA, Calif. -- Dressed in a tailored tuxedo, standing in front of about 400 people in the Appel Room at Lincoln Center in New York City with his parents by his side, San Francisco 49ers defensive lineman Solomon Thomas accepted an award and delivered a speech much as he'd done many times for his exploits on a football field.

This time, though, it had nothing to do with football. This was an introduction of the new Solomon Thomas: still a son and a football player, forever a brother, and now a distinct and important voice in shining a light on the issues of mental health and suicide.

The American Foundation for Suicide Prevention was holding its annual Lifesavers Gala in early May and gave Thomas and his parents -- mother Martha and father Chris -- the Survivors of Loss Award, given to those who have shared their stories in an effort to help others, further prevention initiatives and create change.

“To be strong means to be vulnerable, willing to be uncomfortable, grow in the hardest times of your life and be confident in your emotions," Thomas said in his speech that night. "This is the biggest honor I’ve ever received. I love you all.”

"I kept thinking it's amazing that our 23-year-old son is sitting up there on this stage in front of all these people, and it was a moment of pride but also a moment of just reflection on how he's making a difference in changing people's lives in that room and having a positive impact," Chris Thomas said. "That moment was one of the most impactful moments that I've seen in my life. Solomon has received a lot of awards throughout his sports career, but to me, being recognized for the work that he's been doing as a survivor and trying to help others, that is the most important recognition that he's received."

After a short introduction from 49ers CEO Jed York, Thomas stepped to the dais and delivered an emotional speech in which he thanked his family, the 49ers and the AFSP before telling Ella's story and explaining how her death has changed his family's life.

"He was absolutely stunning and incredible," said Dr. Christine Moutier, the chief medical officer of the AFSP. "It was just a beautiful, beautiful moment."

The worst season of his life

It wasn't until a mid-December 2018 game between the 49ers and Seahawks that Chris Thomas finally recognized his son on the football field.

During warm-ups, Chris Thomas saw a fully engaged Solomon who was locked into the game. Thomas went on to one of his best performances, helping the Niners to their first win against Seattle in 11 tries.

Although Thomas' second NFL season ended with some encouraging signs, it still fell short of the expectations that followed him as the No. 3 pick in the 2017 draft. Now, Thomas doesn't hesitate to call last season the worst of his life, and while he acknowledges that his grief played a part in that, he refuses to use it as an excuse.

All of that bubbled over into some draft-day rumors about Thomas being on the trade block, a notion general manager John Lynch and coach Kyle Shanahan quickly quashed. Lynch even pulled Thomas into his office to tell him there were still big plans for him.

"We all know what he went through, but you can see ... he's got his aura back to him," Shanahan said. "You can see it in his eyes, you can feel his energy a little bit better and it definitely seems like he's in a better place."

Solomon Thomas plays for his sister

San Francisco 49ers defensive lineman Solomon Thomas works hard on the field and says he plays for his sister, who took her own life earlier this year.

'You can't run away from grief'

For the Thomas family, the nearly year-and-a-half journey from Ella's death to that New York City podium was filled with heart-wrenching grief. What followed was what Moutier describes as a "mishmash" experience in which the stages of grief can't be put into an easily defined structure.

Mixed in that grieving process is a natural instinct to question everything that happened leading up to the suicide. What could they have done differently? Were there missed signs? How could they have helped?

"All the phases, the anger, depression, the sadness, guilt, grief, all that kind of stuff," Solomon Thomas said. "[It was] hard for me to get healthy, it took me awhile." 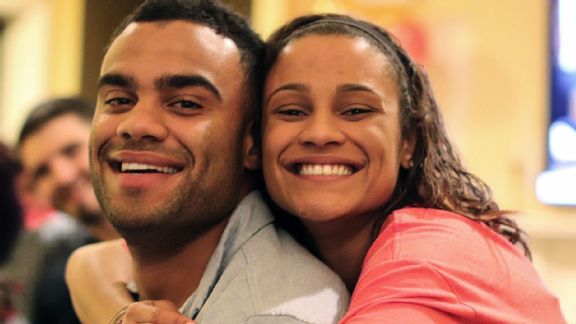 A breakdown of the events the Thomases have been in or will be involved in since losing Ella to suicide in January of 2018:

The Out of the Darkness Overnight Walk -- Raising money for the AFSP by walking with others who have been touched by suicide. (Last June in Dallas and this June 8 in San Francisco)

AFSP Advocacy Forum Conference -- Joining volunteers from around the country to lobby members of Congress for more resources for suicide prevention and mental health.

Chicago Marathon -- Martha Thomas plans to run in the charity division of the marathon on behalf of the AFSP.

Headspace -- Solomon Thomas purchased this meditation and mental health app for the entire Stanford football team for the next five years.

Joyages -- A Dallas-based company Chris Thomas is helping to launch in July that will offer an app that can provide a preventive care program for brain health.

Grant Halliburton Foundation -- Foundation that focuses on educational training for students, parents and educators on recognizing signs of distress or suicidal crisis in young people.

AFSP -- The Thomases are working to set up more opportunities to tell their story and speak at local AFSP chapters in the Dallas and San Francisco areas.

Touched by Suicide -- Another Texas-based organization that works closely with the AFSP and offers support group meetings and services for suicide loss survivors.

Note: The Thomases have also reached out to the NBA and NFL about getting involved with helping their mental health initiatives.

As a family, the Thomases quickly realized there was no way to hide from their new reality.

"You can kind of wallow in your own pain, which we've done plenty of, or try to just help others deal with it," Martha Thomas said. "It's been very powerful to be involved in organizations that other people kind of get it. … You can't run away from grief. It's going to get you one way or another, and it finds its own way to get you and you don't really ever quite know when it is going to get you."

A little less than five months after Ella's death, the 49ers helped connect the Thomas family and the AFSP. On June 2, 2018, the Thomases participated in the Out of the Darkness Overnight walk, one of the AFSP's signature suicide prevention events.

Thomas' group raised about $30,000 for the cause but, more importantly, discovered an outlet to turn the family's tragedy into something more meaningful. Soon after the walk, the Thomas family got in touch with the San Francisco chapter of the AFSP and the national office in New York seeking more opportunities to help.

As the Thomases learned more about the stigma that can be associated with mental health and suicide, they decided they wanted to speak about their loss as openly as possible.

"We realized now that we live in a different, new world," Chris Thomas said. "The previous one was shattered, but we know that we can now try to pick up the pieces and do the best we can to help ourselves and help others. One of the things we find is that doing things like with the AFSP and other organizations, it's almost therapeutic."

Those opportunities to stand with others who have dealt with similar loss ignited something in Solomon Thomas, who said he had to find out who he was again after Ella's death. That meant plenty of time spent with his parents, friends and therapists capable of helping him sort through his feelings.

Thomas' trips to therapy also meant being open with his emotions and seeking what he called a "new outlook on life." He discovered that things won't get easier but that there is a way to adjust and keep moving. Thomas wasn't set on rediscovering his old self as much as discovering the new Solomon Thomas.

What he found was someone who wanted to take unspeakable tragedy and make it comfortably speakable.

Playing -- and speaking -- with a purpose

The new Solomon Thomas wants to slice through the stigma that goes with discussing mental health and suicide, especially in the case of young men and even more so among male athletes participating in sports where any sign of vulnerability has long been considered a sign of weakness.

Having an athlete with Thomas' profile and platform can help get to demographics that have been historically difficult to reach.

"We're all wired in a certain way where we respond differently when things connect to other pieces of our life," said Ryan Ayers, the Northern California area director of the AFSP. 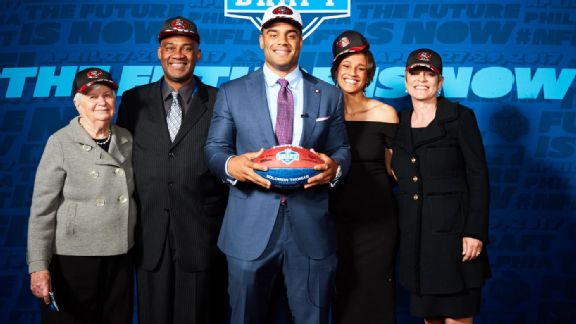 Solomon Thomas: My sister 'was the light of my life.' Story

According to a Harris Poll, 55 percent of the American public reports that they've either been affected by suicide loss, struggled with suicidal thoughts or had a family member who has attempted suicide but survived. Still, the science of it all is in its relative infancy compared with other medical/scientific disciplines.

The funding for study and research of suicide falls well below the mortality rate, Moutier said. Which is why the Thomas family is taking advantage of its chance to give a voice to those who might not otherwise speak up, including a trip to the AFSP's advocacy forum in Washington, D.C., next month to visit with members of Congress and lobby for more resources for mental health and suicide prevention initiatives.

"What we see him doing when he comes and he speaks out publicly in the media or at our events is he's on fire when he's talking," Moutier said. "He's finding his passion and his sense of purpose."

That passion has translated into more than a renewed vigor on the football field.

"Ever since I got healthy, my life's been so different, and it feels great," Solomon Thomas said. "It's like once I got mentally healthy, my life has changed and being me again, because I'm just a guy who goes and guy who loves life, and a guy who tries to bring the energy up around me, just be the best I can in everything I do. That's how I've lived my whole life and why I've gotten to where I've gotten.

"And I'm going to keep going."