RENTON, Wash. -- Shaquill Griffin wasn't going to let his twin brother, Shaquem Griffin, miss the best phone call of his life, even if it meant barging into a bathroom to make sure he didn't.

It was a few minutes before 11 a.m. PT Saturday when Shaquem, watching the NFL draft from a hotel in Dallas along with several family members, got up and exited the room, leaving his phone behind. Shaquill sprang into action when it began to ring, knowing exactly what it meant once he recognized the 425 area code on the screen.

With the Seattle Seahawks calling, the dream they've had since they were 5 years old of playing together in the NFL was coming true.

"When I saw that, I grabbed the phone and jumped over everybody else on the floor and went to the bathroom," said Shaquill, the second-year Seahawks cornerback. "I checked to see if he locked the door; he didn't lock the door. I said, 'You have to grab this!' I said, 'You don't have time for this!' I handed him the phone, and that's how it went."

Said Shaquem: "I looked, and that's when tears just started pouring down."

He was hardly alone. The Seahawks' selection of Griffin in the fifth round was a highly emotional moment for all involved.

It was for Shaquem and Shaquill, who will reunite after the former made history as the first player with only one hand to be drafted in the NFL's modern era.

It was for Seahawks fans. There were many who had been clamoring for the team to pair the two in Seattle's defense, wanting it so bad that they almost seemed disappointed when the Seahawks instead addressed much more pressing needs than outside linebacker in the third and fourth rounds.

And it was emotional for the Seahawks organization, including the top two decision-makers, even though they had more time than anyone to brace for it.

GM John Schneider and coach Pete Carroll have now selected 86 players over their nine drafts together in Seattle. None of the congratulatory phone calls to any of the previous draft picks could match this one.

"It was emotional for all the obvious reasons," Carroll said. "We love Shaquill and knowing what could come of this. My partner here was kind of a mess, to tell you the truth, when he handed me the phone."

Schneider didn't dispute that, saying he had to get off the phone quickly.

How could you blame him? The scenario -- Shaquem not only overcoming the longest of odds to reach the pros, but also rejoining his twin brother on the same team -- is the stuff of Hollywood movie scripts, not NFL reality. 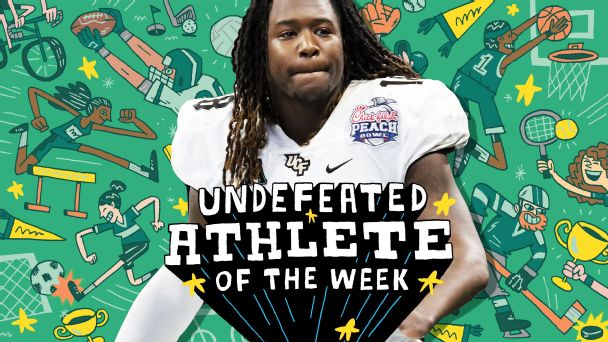 The internet needn't remind the Central Florida linebacker that he's a long shot, that he'll have to defy and conquer never-before-seen odds to achieve his NFL dream.
• The Undefeated: Griffin: 'You can't set limits on what you can do' »

"I had a feeling [it could happen]," Shaquem said, "but the chances are really low."

The brothers spoke with Seattle-area reporters on a conference call while making their way from the hotel room back to the draft at AT&T Stadium. Shaquem said the first thing Shaquill asked him after he got the call from the Seahawks was, "So are you living with me or no?"

"We may have to knock some walls down," Shaquill joked on the conference call, "but we'll figure it out."

To be sure, the Seahawks wouldn't have drafted Griffin if they didn't believe he could help their team, but this almost-too-good-to-be-true story comes at a time when Seattle could really use one.

The Seahawks are coming off their first non-playoff season since 2011, which gave way to an offseason of big-name departures. That included moving on from two of the most important and popular players in franchise history -- Richard Sherman and Michael Bennett. Two more (Kam Chancellor, Cliff Avril) may not return from injuries. Losing other starters in free agency (Jimmy Graham, Paul Richardson, Sheldon Richardson), while making only stop-gap additions, has further dampened the hopes of a swift bounce-back.

Schneider was asked if the Seahawks felt any pressure to draft Griffin knowing how many fans wanted it to happen.

What a story it is, and what a day it was.

"It was like I was dreaming," Shaquem said. "Magical stuff started happening. It's unexplainable, the emotions, everything that was going through my mind. It was crazy."