RENTON, Wash. -- The right cornerback, Tre Flowers, has had a hand in more big plays than he has given up, heady stuff for a rookie fifth-round pick who is playing a brand-new position.

The two safeties, Bradley McDougald and Tedric Thompson, have done their best Kam Chancellor and Earl Thomas impressions by each delivering a hit that sent an opposing receiver to the sideline. Nickelback Justin Coleman had one of his own.

To those who don't follow the Seattle Seahawks closely, their remade secondary might as well be the Legion of Whom. Yet that group has fared better than most would have expected -- albeit with some caveats that even head coach Pete Carroll volunteered. 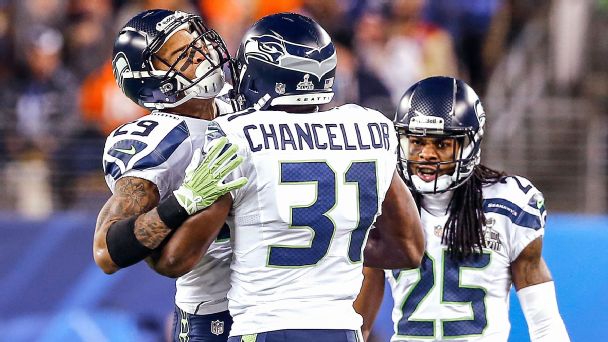 It's early, for one thing. And the quarterbacks on the other side are about to get much tougher than the ones they've faced, starting with Matthew Stafford and the Lions on Sunday in Detroit.

More on that in a bit. First, it's worth revisiting what Seattle's defense has done over the first six games with a secondary that's now without a pair of potential Hall of Famers in Sherman and Thomas and a four-time Pro Bowler in Chancellor.

Seattle has allowed the third-lowest passer rating at 79.9 and the fourth-fewest yards per passing attempt at 6.8. Those numbers represent only slight drop-offs from how the Seahawks' defense fared over its first seven games of 2017 -- the last time its secondary had Sherman, Thomas and Chancellor together at once. During that stretch, Seattle allowed a passer rating of 75.2 (fifth lowest) and 6.57 yards per passing attempt (seventh fewest).

McDougald (two), Griffin (two) and Thompson (one) have combined for five interceptions. That's more than the total for 11 teams and the same amount as four other teams.

As for the big hits, none of them drew a penalty, though the NFL later fined McDougald and said he should have been flagged for lowering his head into Amari Cooper.

"I think the consistency that you might think would've been hard to find has kind of been [there] -- you've seen us play with style from the first week on and we've gotten after the football pretty well," Carroll said. "Guys have stayed on top really well, and we've been physical too. We've had a lot of hits and stuff, so those are all kind of the building blocks of being a good group."

The Seahawks lost the last original member of the Legion of Boom when Thomas broke his leg in Week 4. That completed the group's transformation from one of the NFL's most veteran secondaries -- the core trio of Thomas, Sherman and Chancellor made 81 regular-season starts together -- to one of the youngest.

McDougald, who is in his sixth season, is now its most experienced member. Thompson, a 2017 fourth-round pick, hadn't started a game until he took over for Thomas. Griffin is in his second season. Coleman, undrafted in 2015, was a part-time player over his first two seasons with the Patriots before he became Seattle's nickelback following a 2017 trade from New England. Flowers, the youngest of them all, played safety at Oklahoma State and ascended to a starting role in Week 1 after injuries to veterans Byron Maxwell and Dontae Johnson.

Flowers has forced a fumble and got a hand on a pair of passes that turned into interceptions.

"Yeah, it's still early," Carroll said when asked if Flowers has experienced fewer growing pains than the coach would have expected. "He's still getting going. It's kind of gone like I had hoped it would go, that he would show that he was physical, that he would belong and he could fit in physically and mentally. He's done that. He's shown us that. He's been very active. He's forced three turnovers that are really legit plays that they were going to have the ball and then he knocked it around and we got the ball back ...

None of the quarterbacks Seattle has faced this season cracked the top 10 of Mike Sando's QB tier rankings for 2018, which were determined based on votes from 50 NFL insiders: Case Keenum (tied for 23rd in tier average), Mitchell Trubisky (29th), Dak Prescott (tied for 17th), Jared Goff (19th) and Derek Carr (12th). Josh Rosen and other rookie quarterbacks weren't included.

It's a gauntlet that will provide a better gauge of where the Seahawks, in general, and their rebuilt secondary, in particular, are at.

"Now, we're at the point in the season where we've learned a lot, and now with the experiences that they've had over the last six games -- whether the experiences are going to help us win ballgames in the next few weeks."