Their All-Pro middle linebacker is in line for an extension and could conceivably ask for $17 million per year based on where the top of the market at the position just went.

Their stud pass-rusher is set to make around that amount on a franchise tag in 2019 as he seeks a long-term deal that would exceed $20 million on average.

To be sure, this is a good problem to have. But it's a dilemma nonetheless for the Seahawks now that Bobby Wagner and Frank Clark are next in line for mega-deals following Russell Wilson's four-year, $140 million extension that became official Tuesday.

Can the Seahawks afford to pay all three?

They can if they want to badly enough. Rarely is it as simple as team X "can't afford" player Y. Sure, you can't keep everyone, as the saying goes. But you can usually find a way to make a deal work if there's enough of a will to do so.

If you need a reminder of this, think back to the Seahawks' 2017 trades for Sheldon Richardson and Duane Brown. They reworked Doug Baldwin's contract to fit Richardson under their salary cap, then did the same thing with Wilson's in order to make room for Brown. General manager John Schneider had previously been on record saying he didn't like to treat contracts like ATMs because of the adverse future cap ramifications, but he wanted to add Richardson and Brown strongly enough to make exceptions.

So it won't really be a question of whether the Seahawks can afford to extend Wagner and Clark. Those deals could be structured in a way that actually lowers their scheduled 2019 cap numbers, creating immediate room. Plus, Seattle has only four players on non-rookie deals who are under contract beyond 2020 -- Wilson, Brown, Tyler Lockett and Jason Myers -- so there is plenty to work with in the long-term budget.

The question is more this: How willing would the Seahawks be to skimp elsewhere if they were committing such a large percentage of their cap space to only three players? Schneider made that point in an interview with KIRO-AM 710 ESPN Seattle earlier this month when asked if it's feasible to pay Wilson, Wagner and Clark either at or near the top of the market at each player's position.

Schneider and the Seahawks have been there before. By 2014, the massive bills had all come due for Legion of Boom stars Kam Chancellor, Richard Sherman and Earl Thomas. The next year, it was Wilson and Wagner. Throw in the other sizable contracts they had given to guys like Marshawn Lynch, Baldwin, Michael Bennett, Cliff Avril and K.J. Wright, and something had to give.

It's why the Seahawks ranked at or near the bottom in offensive-line spending in 2016 and '17. That's where they chose to go cheap. They would have to make a similar decision at one position or another if they were to pay Wagner and Clark in addition to Wilson.

Coach Pete Carroll sounded notably confident about an eventual extension for Wagner, who's entering the final year of his contract, when the subject came up last month. But two factors figure to complicate his situation. 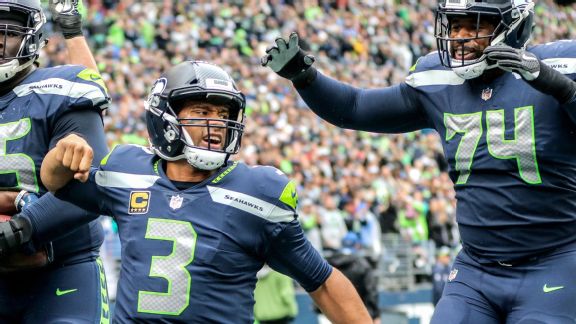 Russell Wilson and the Seahawks win with record extension Story

One is that C.J. Mosley's recent deal with the New York Jets pushed the market for middle linebackers all the way up to $17 million, which is more than $6 million above what Wagner is currently making. It's hard to imagine Wagner, who turns 29 in June, not asking for that type of money given that he's the much more accomplished player of the two.

Wagner is also representing himself, meaning he won't have an agent to serve as a buffer in negotiations that can easily become contentious.

Clark, meanwhile, is likely seeking a contract that at least matches if not exceeds the one DeMarcus Lawrence just got from the Dallas Cowboys, which averages $21 million. Clark, who turns 26 in June, could reasonably ask for that amount given that he's been more productive (33 sacks to Lawrence's 26) and healthier (47 games to Lawrence's 41) over the past three seasons.

But it's a sizable gap to bridge considering the Seahawks have him under club control next season for $17.128 million. The Cowboys had to make a much smaller jump after applying a second franchise tag that would have paid Lawrence $20.57 million.

It's why Clark continues to be the subject of trade talks. The Seahawks will not give him away. They didn't give Sherman away in 2017 when he was being publicly shopped and they didn't give Thomas away during his contract dispute last year. They'll drive a similarly hard bargain knowing that Clark is their only proven edge rusher, which is a big enough need as it is.

Schneider didn't sound during his 710 ESPN Seattle interview as though he was planning on breaking up the Seahawks' star trio.