Alabama coach Nick Saban knew what he wanted when he coached in the NFL -- first as a defensive assistant with the Houston Oilers and Cleveland Browns, then as head coach of the Miami Dolphins in 2005 and 2006.

He has spent the past 11 years as a college head coach making sure he provides that information to the league he left behind. NFL talent evaluators crave information; Saban’s policy at Alabama helps them obtain it.

He has maintained an open-door policy for scouts, a philosophy that can help recruiting, keep college players sharp in practice and, yes, lead to more information for NFL teams. It also can help underclassmen decide if they’re ready for the NFL.

"I know it’s a lot easier when you have that policy than when you don’t," Saban said. "When I was in the NFL and I wanted to go see a player and work out players, places that had a policy that embraced that, you were always looking forward to going there. Places that didn’t, you almost didn’t want to go sometimes. It was counterproductive for the player.”

The Crimson Tide has ruled the NFL draft since Saban became their head coach in 2007. Since then, Alabama leads all schools with 77 draft picks -- five more than runner-up LSU (which did not have a similar policy, but does now). And the Tide leads all schools with 26 first-round picks -- 15 more than LSU and 10 more than Ohio State. The Washington Redskins have drafted four players from Alabama in the past two drafts, including three in the first two rounds.

Alabama’s talent, more than anything, attracts attention. The Tide's elite players annually vie for the top spot among the recruiting rankings. Alabama’s 2017 class had 24 players rated with four or five stars by ESPN Recruiting Nation. Players go to Alabama knowing the NFL is a possibility.

“When you go to college, you’re there to develop in your career and develop off the field and develop on the field to play at the next level,” said Saban, who has won five national championships at Alabama. “To not embrace that and help the players do that is counterproductive.”

One longtime NFL talent evaluator said some schools have an open-door policy but only let scouts watch the first 15 minutes of practice. At Alabama, they can watch it all. The evaluator said that even watching the one-on-one work helps get a better feel for defensive linemen and corners, in particular.

With defensive backs, for example, they can watch their hips and feet -- see if they have any tightness when they turn to run. With the linemen, they stand close enough to hear how loud the popping sound is when their hands hit the bags. They get a feel for body language.

“There’s nothing like a live look, and Alabama practices at a high tempo,” the evaluator said. “It’s why they’re so good. They practice so hard and you get something out of that. ... When you walk out of a school and have the kid nailed, that’s important.”

Perhaps part of the reason they practice that hard stems from having so many judging eyes at practice.

“If your goal as a player is to play in the NFL, I would think any time you felt you were getting evaluated by that group, it’s something you would want,” Saban said. “That’s not why we do it, but I can see that being a benefit.”

“It’s understood that scouts will be at practice every day," Hamilton said. "I took my junior and senior year every day as a job interview. You’ve got to come with it every day.

“When you’re going against guys who are first-rounders and NFL draft picks every day, you know you’ve got to bring it every day.”

Former Alabama quarterback Greg McElroy, who already was at the school when Alabama hired Saban, initially said he didn’t think having scouts around made players practice harder. But, he said, players were definitely aware scouts were attending, though he didn’t worry about whether or not a bad throw had an impact on his future.

Then he thought a little more.

“But I’ll be the first to tell you when people are watching, you’re going to play harder,” said McElroy, now an analyst for ESPN’s SEC Network. “It’s inevitable. If there are no NFL scouts at practice, the likelihood you’re going to go through the motions is a little higher. It’s human nature. That doesn’t make you less of a competitor. If there are NFL scouts and you’re draft-eligible, you’re definitely going to be willing to practice a little harder and maybe finish drills more consistently.

"Having an additional set of eyes out there probably does increase the level of focus. But I don’t think that’s behind the philosophy.”

Saban said he wants his players to have as much information as possible when deciding whether or not to enter the draft as a junior.

“If you’re a first-round pick, you should go out,” Saban said.

If not, then they should think twice about making the jump. Regardless, the more scouts see players, the more informed an opinion they can offer. A Yahoo feature recently relayed a story about a Dolphins scout walking through the Alabama facility six hours before a game against Tennessee. As he passed the defensive backs room, he saw Minkah Fitzpatrick in there by himself watching film. The Dolphins drafted Fitzpatrick with the 11th pick. 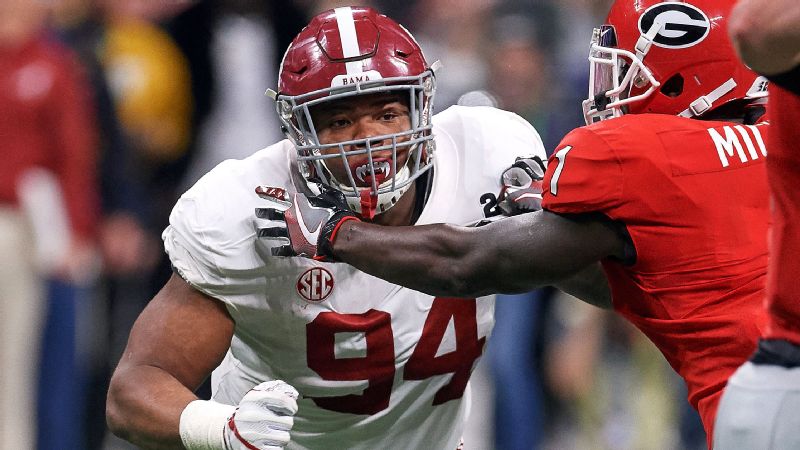 The Redskins are making a habit out of picking Alabama players, having selected four on defense in the last two drafts alone, writes John Keim.

“If we have an open-door policy, then everyone knows our players well,” Saban said. “They can give us better information, which I pass on to the players and their families so they can make better business decisions. It’s different than other professional leagues because there’s no developmental or minor league. If a player is going to develop and improve, he’ll have to do it in college. It’s all or nothing when you decide to go to professional football.”

McElroy played at Alabama, and the former quarterback said they didn’t realize having scouts there on a daily basis was different from other schools. Then he started covering colleges for ESPN’s SEC Network.

“I get the sense at some places there’s a legitimate resistance about having NFL talent evaluators at practice,” he said. “They feel it can serve as a distraction.”

Another bonus for Alabama trickles down to high school prospects.

“It’s all about recruiting,” McElroy said. “The fact they had 12 players drafted, they can email it out or put it on social media and they can say they got X amount in signing bonuses. ... Nick knows that every single April he needs to have three big days [in the draft] because that only allows his program to recruit at a higher level.”

But McElroy said it’s unfair to compare Alabama's policy with most programs. At some schools, they might have one defensive lineman in their program who projects as a first-round pick.

“When Nick loses a first-round pick, that’s OK. There’s another first-rounder behind him,” McElroy said. “That’s a tremendous luxury to have. In some programs, the biggest recruiting play every year is done in mid-January because they’re trying to get guys to stay. Nick can say, ‘Go. We have guys who can fill your spot.’ Everybody at Alabama is replaceable because of how well they’ve recruited.”

And that is the essence of why so many get drafted. The Redskins said it was a coincidence that they ended up with so many players from Alabama the past two years. But it’s not a coincidence they keep mining the school for help.