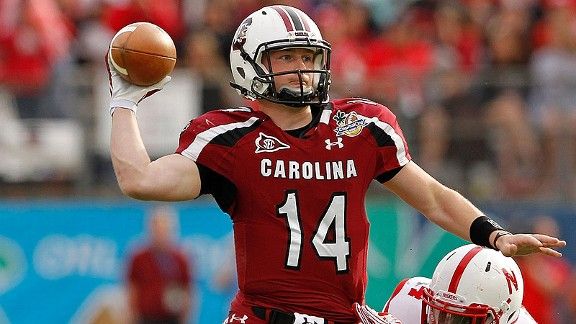 Connor Shaw will look to replicate his late-season surge in 2012.

Can you name the FBS leader in pass efficiency rating from Nov. 6 to the end of the season?

Here's a hint: It was an SEC quarterback.

No, it wasn't Arkansas’ Tyler Wilson. Not Georgia’s Aaron Murray. And not the MVP of the BCS National Championship Game, A.J. McCarron of Alabama.

The most efficient quarterback, according to pass efficiency rating, was Connor Shaw of South Carolina. That's the same Connor Shaw who was not a starter until Week 6 of last season.

From Nov. 6 to End of Season

Shaw drastically improved at the end of last season, completing 70.1 percent of his passes with eight touchdowns and two interceptions after losing to Arkansas on Nov. 5. The Gamecocks went 4-0 to close the season, including wins against Florida, Clemson and Nebraska.

Prior to Nov. 6, Shaw was completing 62.8 percent of his passes and his pass efficiency rating tied for eighth in the SEC.

The key to Shaw’s success was a mix of accurate deep passing and more efficient rushing.

Shaw increased his completion percentage 15 points on passes of 15 yards or longer in the final four weeks of the season. Six of his eight touchdowns after Nov. 5 were on passes of this distance.

And in the final four games he averaged 5.0 yards per rush compared to his 2.8-yard average in South Carolina’s first nine games.

These reasons, along with and more reps in Steve Spurrier’s offense, made Shaw the best quarterback in the SEC in the final two months of the season. Despite throwing just 18.4 passes per game, he ranked in the top two among SEC quarterbacks in total yards per game, touchdowns, yards per pass attempt, yards per rush and pass efficiency rating from the start of November through the end of the season.

The return of running back Marcus Lattimore should further improve Shaw’s numbers this season. The threat of Lattimore could open up play-action opportunities, an area in which Shaw has excelled.

Shaw struggled most passing on the road in 2011, completing 9 of 33 passes thrown 10 yards or longer away from home.

If Shaw can improve his road splits, he has a chance to become one of the top quarterbacks in the nation. The good news for Shaw is that three of South Carolina’s first four games are in Columbia, and the Gamecocks don't face a ranked opponent until Georgia comes to town on Oct. 6.