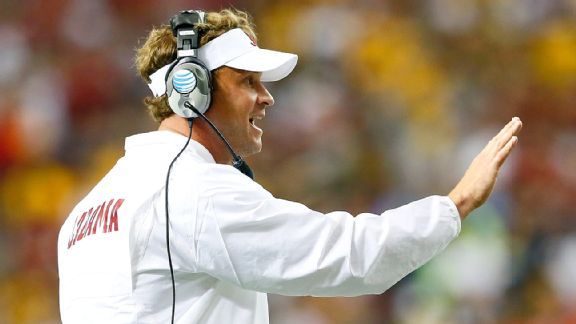 Offensive coordinator Lane Kiffin has brought a new philosophy to Alabama this season.Monday, Sept. 29, was the one-year anniversary of Lane Kiffin’s infamous firing by USC at the Landmark Aviation Terminal at Los Angeles International Airport.

Twelve months later, Kiffin is in charge of perhaps the best unit in college football and leading it to unprecedented success.

Alabama has 2,377 yards this season, breaking a 41-year-old school record for most yards through four games. This, despite starting a quarterback (Blake Sims) who had attempted 39 passes in the first three years of his career.

There are two ways in which Kiffin has changed the offense for the better -- his use of the no-huddle offense and the use of receiver Amari Cooper.

Increasing tempo, however, is not necessarily the goal of the no-huddle offense. It was implemented largely to make things easier for Sims.

As coach Nick Saban told AL.com after Alabama’s Week 1 win over West Virginia: “It's easier to communicate when you're going no-huddle because you just have code words and short words for plays and passes and that kind of stuff. It eliminates the communication in the huddle, it makes it easier for the quarterback, so that's the reason that we went to it to settle Blake (Sims) down in the game.”

Alabama No Huddle - By Week

Alabama has increased the number of plays run out of no huddle every week this season. Over their last two games, the Tide have run more plays without a huddle than with one.

The offense has relied on short passes in the no huddle, as Sims averages 5.4 air yards per attempt on such plays.

But he has been efficient with those passes, as his 77.8 completion percentage and his 95.3 QBR are both second among Power Five quarterbacks with at least 20 passes.

Kiffin has also learned to exploit receiver Amari Cooper. After an injury-plagued start to his 2013 season, Cooper has started 2014 on fire, leading the nation in receiving yards per game (163.8). Cooper averages 14 targets per game this season.

In his first two years, he had one game with more than 11 targets, last season’s Sugar Bowl loss to Oklahoma. Cooper leads FBS receivers with 6.3 first-down targets per game.

The early-down success has helped the Tide on third downs. Alabama leads the FBS in third-down conversion rate (61.8 percent), due in large part to facing an average of 5.1 yards to get the first down on third down. That’s the second-shortest average distance in the FBS and 1.4 yards less than last season.