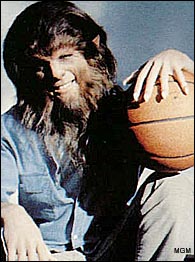 Is Teen Wolf Playing by the Rules? If the Rules are "Be Awesome" Then Yes. Otherwise, No.

So, confession time: We threw Teen Wolf into the ole DVD player yesterday. What can we say? All of the previous night’s stellar college basketball action had us hungering for more hoops. And of course, when it comes to the final game scene – the regional championship pitting Michael J. Fox’s Beavers against the Dragons – we paid extra attention.

Being high school athletes ourselves, washed up as we now may be, a few things seemed just a bit off to us. So we decided to take a spin through the Pennsylvania Interscholastic Athletic Association handbook (the internet consensus seems to be that Beacontown, the town MJF’s high school is in, is in PA) to see if all the events in the game were kosher. Shockingly, no.

And just what events are we talking about? First of all, MJF enters the game late, with a little more than two minutes left in the first period. Question 1: Where is he coming from? He doesn’t come in from the locker room, he comes in through these big double doors that look like they would lead outside. Odd. Now, we see nothing in the rulebook that says that’s not OK, but it’s definitely not OK that coach Bobby Finstock left the coaching box to greet Mikey. That’s a technical for sure. Question 2: The Beavers assistant coach is the creepiest Andy Samberg doppelganger ever, right?

But MJF joins the huddle. Question 3: Why is he sweating before he’s even started playing? Either way, he jumps in the game (without registering with the official) and takes his place for the jump ball. Wait whaaaat? Jump ball? The last play before Teen Wolf interrupted everything was a flagrant foul on a Beaver (“that’s a purple heart, kid,” says Finstock), then a time out. PIAA rules definitely don’t say anything about mandatory jump balls following time outs after ex-wolf players arrive late to a game. Then again they don’t say anything about a wolf being allowed to play basketball, either. We just feel bad the poor kid who got fouled got gypped out of his two foul shots.

Then there’s the business of Stiles selling merchandise in the stands. First, it’s totally illegal, and even if he did get a permit to do it, his net proceeds would have been the net property of the PIAA (as all net proceeds from Inter-District Championship basketball contests are). And that’s just ridiculous. Everyone knows the proceeds should have gone to Michael J. Fox anyway. If he didn’t turn into a wolf, there’d be no merchandise to begin with. But he had a job at his dad’s hardware store, so we don’t think he was hurting for cash.

We also couldn’t help but notice adidas sponsoring both the Beavers and Dragons. While it doesn’t look like the PIAA prohibits this, we have to think if both teams went with Nike, they would have had access to these killer kicks.

Now, as we looked closer at the Dragons' bench, it’s clear that all the players, including their star, Mick (whose full name is Mick McAllister, by the way. Classic.), present the most blatant age violation since Danny Almonte donned a Little League uniform. We think the PIAA must have given them a pass though. Because if they punished the Dragons, they’d have to punish the Beavers for Michael J. Fox’s excessive celebrations throughout the game. The wolf kid should have had a technical three times over as he jumped into his teammates arms not once, not twice, but three times after making the most routine of baskets. And that doesn’t count the creepy leap into his dad’s arms after the game where he awkwardly bounced up and down in his dad's lap for a few seconds.

Of course, the most blatant rule violation of all rule violations is a fouled-out Mick standing ON THE BASELINE as Michael J. Fox takes his free throws with no time on the clock, down by one point. We’ll extend the realm of possibility and pretend that Mick would still have been in the game after about eight flagrant fouls, including a perfectly executed clothesline. Now, aside from the fact that players who have fouled out have to return to the bench, it’s a clear lane violation! Though we must say, it makes for a killer image. If anyone out there has a poster of this moment, skip eBay. We’ll pay top dollar for it.