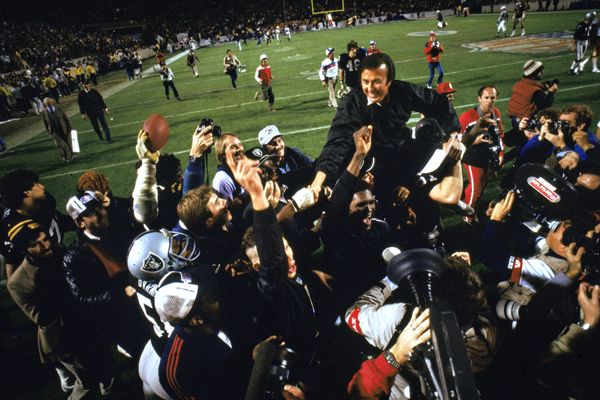 Was it Wayne Newton or Tom Flores who coached the Raiders to Super Bowl XVIII?

January 22, 1984 – The ground shook as Tampa Bay Stadium played host to Super Bowl XVIII between the L.A. Raiders and the Washington Redskins. Washington entered the game as favorites with the league’s best record (14-2), but left humiliated when the Raiders trounced the Skins 38-9. The Raiders’ 38 points and 29-point margin of victory stood as Super Bowl records until the Bears beat the Patriots 46-10 in Super Bowl XX. The Skins defeat was so embarrassing, Super Bowl XVIII became known as “Back Sunday,” in reference to the Raiders team colors and the Thomas Harris novel based on a threatened terrorist attack at the Super Bowl.

The Redskins may have left the field with their heads down, but deep inside we know Washington’s squad was smiling. They can say they were in attendance when Barry Manilow sang the national anthem for Super Bowl XVIII.