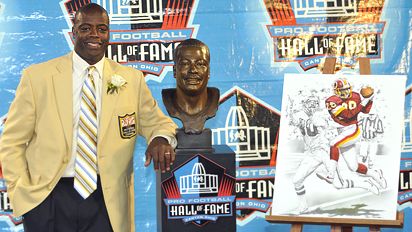 Hey Darrell, it was totally okay for you to get fat and slow after this happened.

Hall of Fame cornerback Darrell Green turned 50 on Tuesday. He turned more than a few heads when he tweeted that he celebrated his birthday by running the 40-yard dash in 4.43 seconds.

@darrellgreen28: Quick update from the Birthday Boy:) I think today I became the fastest 50 year old in the world! @9AM today, I celebrated my 50th BDay.....

@darrellgreen28: I'm guessing that makes me the fastest baby boomer! I would say, thats really booming. Are you?

Considering he played in the NFL for 20 years (all with the Redskins) we wouldn't be surprised if he lost all of the cartilage in his knees, much less his blistering speed.

To further put things in perspective, here are some active football players and their 40 times (NFL combine):

And that time was before he had to visit Dr. James Andrews.

Do you risk a top five fantasy pick on a guy who can't out-sprint a guy who's twice his age?

What's Green's secret? His pregrame ritual used to include eating and tucking Tootsie Rolls into his socks. If all he's eating these days are nachos and Cool Whip we're giving up on yoga and tofu salads forever.