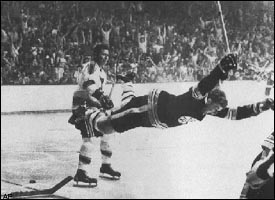 Orr, who won two Stanley Cups with the Bruins and is the only defenseman to win the league scoring title, was born in Parry Sound, Ontario and was signed by the Bruins as a teenager. He made his NHL debut with the Bruins in 1966 and signed a record contract. He was a two-time finals MVP, he won eight straight Norris Trophies (the league's best defenseman) and he won the Hart Memorial Trophy (MVP) three times. In 1979, the Hockey Hall of Fame waived the mandatory waiting period and Orr was enshrined at age 31, making him the youngest player to be inducted.

Only five other five defensemen in NHL history have recorded 100-plus points in a season. Along with Orr, Paul Coffey, Denis Potvin, Al MacInnis and Brian Leetch have done it.