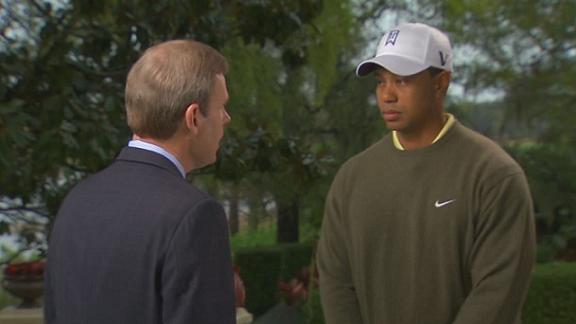 Earlier today, Tiger Woods spoke with ESPN's Tom Rinaldi in the first public interview since his transgressions became public. Topics included the car accident, his time in rehab, and his upcoming return to golf at the Masters. Here is the complete transcript of the interview:

Rinaldi: Tiger, what’s the difference between the man who left Augusta National a year ago and the one who’s about to return?

Rinaldi: For a lot of people, the spark of those bad things, is November 27th, early that day, what happened?

Woods: Well you know it’s all in the police report. Beyond that everything's between Elin and myself and that's private.

Rinaldi: Why did you lose control of the car?

Woods: As I said...that’s between Elin and myself.

Rinaldi: If it's a private matter why issue a public apology?

Woods: Well, I owe a lot of people an apology. I hurt a lot of people, not just my wife ... my friends, my colleagues, the public, kids who looked up to me, there were a lot of people that thought I was a different person and my actions were not according to that. That's why I had to apologize, I was so sorry for what I've done.

After the jump, the rest of Tom Rinaldi's interview with Tiger Woods.

Rinaldi: You’ve said you’ve made transgressions. How would you, in your own words, describe the depth of your infidelity?

Woods: Well, just one is enough ... And obviously that wasn’t the case, and I’ve made my mistakes. And as I’ve said, I’ve hurt so many people, and so many people I have to make an amends to, and that’s living a life of amends.

Rinaldi: You said you were in treatment, the simple question is for what?

Woods: I saw a person that I never thought I would ever become.

Rinaldi: Who was that??

Rinaldi: Why not seek treatment before all of this came out?

Woods: Stripping away denial, rationalization. You strip all that away and you find the truth.

Rinaldi: How do you reconcile your behavior with your view of marriage?

Woods: That's living a life in amends, and that's just working at it each and every day.

Rinaldi: Given all that’s happened ... what’s your measure of success at Augusta?

Woods: Well, playing is one thing. I’m excited to get back and play, I’m excited to get to see the guys again. I really missed a lot of my friends out there. I miss competing. But still, I still have a lot more treatment to do, and just because I’m playing, doesn’t mean I’m gonna stop going to treatment.

Rinaldi: What reception are you expecting from fans?

Rinaldi: How much do you care?

Woods: It would be nice to hear a couple claps here and there ... but also hope they clap for birdies too. (laughs)

Rinaldi: 11 months ago, here at Isleworth, I asked you, ‘How well does the world know you?’ What’s your answer to that now?

Woods: A lot better now. I was living a life of a lie, I really was. And I was doing a lot of things, like I said, that hurt a lot of people. And stripping away denial and rationalization you start coming to the truth of who you really are and that can be very ugly. But then again, when you face it and you start conquering it and you start living up to it, the strength that I feel now ... I’ve never felt that type of strength.

Rinaldi: In the last 4 months Tiger, what's been the low point?

Woods: I’ve had a lot of low points. Just when I didn't think it could get any lower, it got lower.

Woods: When I was in treatment, out of treatment, before I went in, there were so many different low points. People I had to talk and face like my wife, like my mom.

Woods: They both have been brutal. They’ve both been very tough. Because I've hurt them the most. Those are the two people in my life who I’m closest to and to say the things that I’ve done, truthfully to them, is ... honestly ... was ... very painful.

Rinaldi: What was your wife's reaction when you sat down and had that first conversation?

Woods: She was hurt, she was hurt … very hurt. Shocked, angry and she had every right to be and I'm as disappointed as everyone else in my own behavior because I can't believe I actually did that to the people I loved.

Rinaldi: I ask this question respectfully, but of course at a distance from your family life. When you look at it now ... why did you get married?

Woods: Why? ‘Cause I loved her. I loved Elin with everything I have. And that’s something that makes me feel even worse. That I did this to someone I love that much.

Rinaldi: How do you reconcile what you’ve done with that love?

Woods: We work at it.