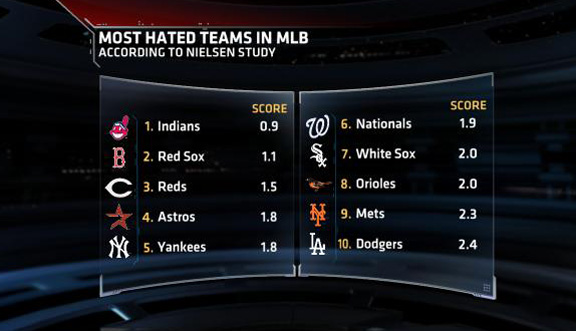 YANKEES ONLY 5TH MOST-HATED TEAM ACCORDING TO STUDY: According to a Internet algorithm created by The Neilsen Company that analyzes how people feel about certain things, there are four teams more detested than the Bronx Bombers, The Wall Street Journal reported. This service typically uses various keywords to find out whether people have positive, negative or neutral reactions to different brands and products. No team registered a negative mark on Nielsen's "sentiment scale," which ranges from -5 to 5, but the Yankees (1.8) were one of only six teams to score lower than 2. The Mets finished four spots higher, making them the ninth most-hated team. The San Francisco Giants and Oakland Athletics were the most popular teams among fans, according to Neilsen's study.