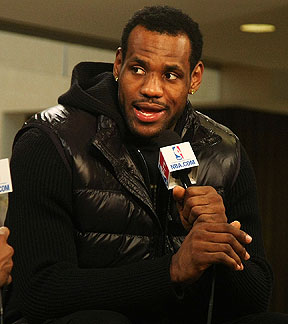 "Listen guys, my driveway is big, but it's not that big."

We might not know a ton about the inner workings of LeBron James’ home life, but we can take a pretty good guess at one thing – the kid doesn’t need any more new cars. But that doesn’t mean people have stopped giving them to him. Most notably, Kia, the car company that presented him with a 2009 Borrego for winning the 2008-09 MVP award and a 2011 Sorento for winning this year’s MVP award.

Hard to imagine LeBron’s going to be cruising around in a Kia, no matter how fun the commercials make it look. So King James does the nice thing and donates his MVP rides (the Akron Urban League got his Borrego and the Summa Foundation got his Sorento). Only one problem: no one can drive them, as the Akron Beacon Journal reports. At least not for a year, as Kia’s contract forbids the recipient of a donated MVP car from giving it to anyone for one year.

Well this doesn’t help anyone. The worthy organizations can’t use the cars for quite some time (the Urban League is just now raffling off the ’09 Borrego and is looking to make about $30,000). And so the cars just sit there. Unloved. And we can't have that. Instead, we have some suggestions as to how to use the cars during the so-called “dark year.”

Go ahead and have that raffle. Only, target it to high school kids. And don’t just offer up the car by itself, offer the car along with Driver’s Ed lessons from the one and only LBJ. King James will pick up the one lucky student, take him or her for a spin around Akron and show them all the three-point turns they can handle. That'll up the value of a raffle ticket, right? And surely LeBron’s a good driver. He must be: dude was cruising around in a Hummer in high school. The charity wins, the kids win, everyone wins! Except maybe LeBron. Who is forced to give driving lessons. But hey, no one ever said charity was easy.

Another option — again, raffle the ride off like usual. Only don’t raffle it off to be driven, raffle it off to be filled with popcorn and sent to Kenyon Martin as a Un-April Fools Day Joke. At least the car will get some use, even if no one's technically driving it. And maybe K-Mart will finally learn how to take a joke, as it’s LeBron's car's upholstery that’s getting smeared with liquid butter-flavored product, not his.

Or, let's take this option for a ride. Cavs owner Dan Gilbert is all up in arms with media reports that LeBron James has any influence on who the Cavs will select as their new head coach, saying "the concept that LeBron James has been involved in any way shape or form of firing our head coach, involved in the transition of general manger to (Grant), will be involved in future coaching decisions and hires, is totally, 100 percent and patently false. It's unfair to (LeBron). It's unfair to the franchise." OK, Dan. Point taken. But that doesn't mean LeBron can't influence where his former coach, Mike Brown goes. Say, by using his new SUV as a Hire-Mike-Brown-Mobile and driving him around to interview after interview. After all, if LeBron wants to give back, what better place to start with than the coach who made him into an MVP, or something like that.