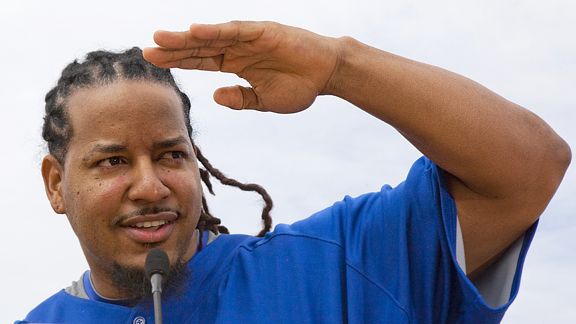 Manny Ramirez watches his mystery bidder drive off in his car.

After 10 days of bidding, Manny Ramirez's 1994 Porsche 911 Turbo 964 was auctioned off for $50,100. The car was appraised at more than $58,000 and considering Manny almost sold his neighbor's grill for $99,999,999 in 2007, this may be the biggest steal of 2010. All proceeds from the sale will be will be divided between ThinkCure!, the Dodgers' official charity, and Maryvale, a residential placement home for girls in suburban Rosemead.

The team has yet to identify the winner of the auction, but we have a few guesses on who this mystery man/woman may be:

Jerry Seinfeld - What is it about Jerry and Porsches? Seinfeld is rumored to have over 40 Porches in his collection, but has yet to snag one previously owned by a member of MLB's 500 home run club. Manny's automobile would truly make Seinfeld the Master of the Porsche Domain.

Christie Brinkley - It's been 27 years since Sports Illustrated's former swimsuit covergirl drove past Clark Griswold in her red Ferrari. With only 34,569 miles on it, Manny's sports car would be a logical and cost-efficient replacement.

San Francisco Giants - It's a pretty simple formula for the Giants: Purchase the car from your division rival and then charge each fan $5 at the next Giants-Dodgers game to take a swing at it with a sledgehammer. It's the easiest promotion they'll have all season.

Lastings Milledge & Andrew McCutchen - If Ramirez has driven it this long it's obviously dreadlock tested and Manny approved. It's the perfect car for Milledge and McCutchen to drive to the ballpark in each day.