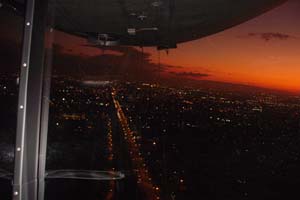 If sports has taught us anything over the years, it's that you can't beat the view from a blimp.

If Don Hartsell gets his way, at about this time next year, we’ll all be glued to the TV watching air ships (you know, like blimps and stuff) race around the world. As The Wall Street Journal tells it, Hartsell, a 57-year-old lawyer/accountant/entrepreneur, got the idea for a worldwide race when he saw the Goodyear blimp pass by the Statue of Liberty at the U.S. Bicentennial festivities in 1976. Since then, he’s spent $2 million (of his own money) and raised $2 million (of other people’s money) to make his project a reality.

If it were to become one, it would be a first. At least, that’s what all the aviation historians say. The race would begin on the prime meridian in England on Sept. 23, 2011, cruise around some of the world’s great landmarks – the Eiffel Tower, the Great Pyramid, the Taj Mahal, the world’s largest rocking chair – and return to Europe on March 20, 2012. But while many are interested in Hartsell’s idea, no one has officially signed on.

Come on, people. A blimp race! Are we the only ones who think this needs to happen?

First of all, think of all the good blimps do. Without blimps, we wouldn't have all that aerial footage of sporting events we love so much. And we definitely wouldn’t have posters like these. And without posters like these, what on earth would you give your weird uncle every year at the holidays?

Sponsors, if it’s the cost you’re worrying about, we have two words for you. NASCARize ‘em. The blimps, that is. What’s five hours of racing every weekend compared to six whole months of nonstop exposure for your company (and just try and tell us Blimpie wouldn't want to pull a Sprint and sponsor the whole thing). And if you thought pink kitties and unicorns looked good on Kyle Busch’s car and firesuit, just image how great they’ll look on an 800 foot airship.

So, Mr. Hartsell. Not only do we fully support you on this quest, we’re all for incorporating more airships into daily life. Think about it. People are all about hating on airlines right now. And ever since last year’s “Up,” people having been looooooving blimps (or houses tied to balloons that function like blimps, but tomato, tomaaaahto, right?).

Blimps, this is your time to swoop in! To become the new standard in air travel. Just make checking bags free and let people keep their shoes on while going through security, and airline customers will come flocking over. And we think we know just the guy to kick off your worldwide advertising campaign … Steven Slater! AKA The JetBlue Flight Attendant. Done and, most certainly, done.