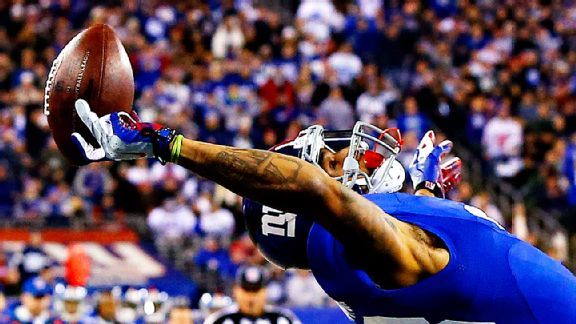 Odell Beckham Jr. has made a case of NFL Offensive Rookie of the Year in just 10 games.As the NFL season closes in on the end of the regular season, ESPN Stats & Information looks at some of the leading candidates for offensive rookie of the year.

The Cincinnati Bengals have a rookie running back in contention for offensive rookie of the year for the second year in a row.

This year it is Hill, a second-round pick out of LSU, who played behind Giovani Bernard early in the season. He leads all rookies with 1,082 yards from scrimmage, which accounts for 22 percent of the first-place Bengals’ team total. That is the highest percentage of team offense among rookies and 11th among all running backs.

Signature play: A 60-yard touchdown rush in Week 9 against the Jaguars with 8:13 left in the fourth quarter. Hill made one cut, broke free down the left sideline, shed a tackle inside the 10 and found the end zone.

The New York Giants wide receiver is second behind Hill in yards from scrimmage among rookies with 1,007, despite missing the first four games of the season due to a hamstring injury. Beckham’s 101 yards from scrimmage per game leads the next closest rookie (RB Tre Mason) by more than 23 yards.

Beckham, a teammate of Hill's at LSU, is averaging 7.1 receptions, 97.2 receiving yards and 0.9 touchdowns in the 10 games he has played. All three of those averages are the highest among rookies in a season dating to the start of 2001.

Signature play: What else can it be? The incredible, one-handed touchdown grab that took over social media in Week 12 against the Dallas Cowboys (pictured above) was a catch for the ages. And Beckham believes his best has yet to come.

Evans, the seventh overall pick, has 11 receiving touchdowns for the Tampa Bay Buccaneers this season. That is tied with former Bucs receiver Mike Williams for the most by a rookie receiver since Randy Moss had 17 in 1998.

Evans, out of Texas A&M, is the only rookie to top 200 receiving yards in a game this year. His 209-yard performance against the Washington Redskins in Week 11 is tied for the sixth-highest total in a game for any receiver this season and second-highest in a game by a rookie wide receiver in the past 10 years (Justin Blackmon in 2012).

The quarterback play in Tampa has been poor, but that has not stopped Evans from being one of the best deep threats in the NFL. On passes thrown at least 20 yards from the line of scrimmage, Evans ranks first in receptions (18) and yards (579) and second in touchdowns (six).

Signature play: It’s tough to choose just one for Evans. His over-the-shoulder grab on his second touchdown against the Browns showed some impressive concentration, and the touchdown against the Falcons showed how tough it is to cover a 6-foot-5 receiver who has a 37-inch vertical leap. Both passes were thrown more than 20 yards downfield, showing off Evans’ ability to stretch the field.

WR Sammy Watkins, Bills (72 percent of plays have gained a first down, highest among rookies)