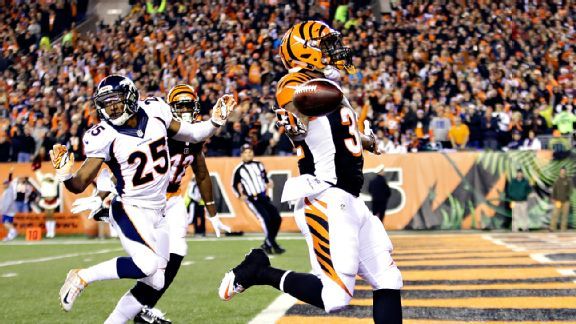 Cincinnati had only four playoff appearances in the 28 seasons prior to 2011. The Bengals now seek their first playoff win since 1990. Every other NFL team has won a playoff game in that span.

Cincinnati's Jeremy Hill ran for 147 yards, the most by any player against Denver this season. He became the fourth Bengals rookie to rush for 1,000 yards and the first since Corey Dillon in 1997.

Most Rush Yards by Bengals Rookie

Hill's 85-yard touchdown run in the first quarter was the second-longest rushing touchdown ever against the Broncos, trailing only Ahman Green's 98-yarder in 2003.

The Broncos entered the game allowing the fewest rushing yards after contact in the league this season.

As a team, the Bengals ran for 207 yards, marking the first time since 2003 that they've run for 200 yards in consecutive games. The 166 rushing yards in the first half were Cincinnati's most in a first half in the past 15 seasons.

Manning lost for the first time in nine career starts against the Bengals, and he is now 22-2 when playing against AFC North teams. The other loss was to Pittsburgh in 2002.

After five interceptions in his first eight games against Cincinnati, Manning threw four interceptions on Monday night. It was his sixth career four-interception game, including the playoffs, and his first since he was with the Colts in 2010. He also threw three fourth-quarter interceptions for the second time ever (also against New England in 2000).

His turnovers came on throws both long and short on Monday. Manning was 5-of-8 on throws at least 15 yards downfield, but two of those three incompletions resulted in interceptions, both in the fourth quarter. In the past three weeks, Manning has one touchdown and four interceptions on deep passes.

He completed 18 of 28 attempts (64 percent) on throws five yards or fewer downfield, including two interceptions, which were his most on short throws in the past five seasons.

Three of Manning's interceptions were on throws to Demaryius Thomas. Entering Monday night, Manning had three interceptions all season when targeting Thomas.

Overall, Manning's QBR of 24.2 was his lowest since 2012 Week Two, his second game after returning from neck surgery.

Manning's counterpart found success in unexpected ways. Andy Dalton completed 17 passes, with 15 of them coming on passes 10 yards or fewer downfield. Dalton had struggled on short passes entering this game, with more interceptions (six) than touchdowns (five) on such passes this season.

Dalton threw two touchdowns from outside the pocket for the first time in his career, doubling his season total of such touchdowns entering Monday.

He never did connect with A.J. Green, going 0-of-4 when targeting the fourth-year receiver, who had X-rays on his arm during the game. This was the second time in his career that Green hasn't had a catch in a game he has played. The first was against Atlanta in Week 2 of this season, when Green injured his toe during the game.