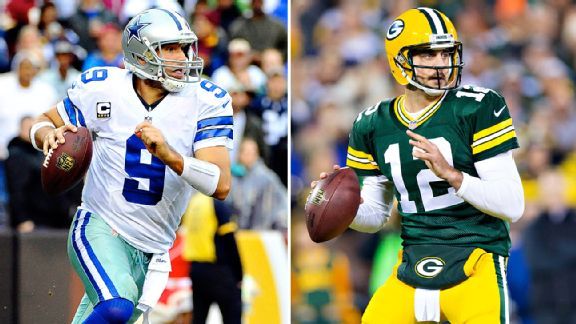 Tony Romo leads the NFL in Total QBR, but a stat accounting for usage favors Aaron Rodgers.According to Westgate Las Vegas SuperBook, the Dallas Cowboys began the season with 75-1 odds of winning the Super Bowl, tied for 26th in the NFL.

After three straight December victories, including a 42-7 rout of the Indianapolis Colts on Sunday, the Cowboys have clinched the NFC East and their first playoff appearance since 2009.

Tony Romo has been at the center of the Dallas resurgence, leading the NFL in Total QBR and jumping into the NFL MVP discussion.

Looking deeper into the numbers, Aaron Rodgers should have the edge over Romo for NFL MVP because of his total value to his team and consistency throughout the season.

A strong argument in favor of Romo centers on his NFL-high 82.3 Total QBR and clutch play in December.

As an all-encompassing barometer of quarterback success, Total QBR is a great measure of efficiency.

However, looking purely at Total QBR to evaluate a player’s MVP candidacy can be misleading. Total QBR is calculated on a per-play basis, meaning it does not account for the number of plays in which a quarterback is involved. A player can post a high QBR without having a large impact on the game.

Last season, Josh McCown played eight games, and had he been involved in a few more plays, he would have led the NFL with an 85.1 Total QBR. No one would have claimed that McCown was more valuable than Peyton Manning (82.9 Total QBR), who set the NFL single-season record for touchdown passes.

A better measure of a quarterback’s total contribution to his team is a metric called quarterback points above average (QB PAA). QB PAA, which is calculated from QBR, measures total production of a player by accounting for both efficiency AND the number of plays in which he is involved. In 2013, Manning led the NFL in QB PAA by a wide margin and McCown ranked fourth, 52.8 points behind Manning.

It makes sense that a quarterback who is both efficient and has a high usage rate would receive strong consideration for MVP.

Rodgers leads the NFL with 65.6 QB PAA. That means that over the course of the season, Rodgers has added about 66 more points to his team than an average QB would have with the same number of action plays.

Romo ranks third behind Rodgers and Manning, and even accounting for the fact Romo missed a game with a back injury, he trails Rodgers on a per-game basis.

The main reason for the disparity is that when compared with other top players, Romo is not asked to do as much for his offense.

With the NFL’s leading rusher, DeMarco Murray, averaging an NFL-high 25 rushes per game, Romo is averaging the third-fewest action plays per game among qualified NFL QBs.

Dallas runs on the highest rate of its plays in the NFL (49 percent), and Murray has accounted for the highest percentage of his team’s total yards (38 percent) of any non-quarterback. That leaves less of the offense in the hands of Romo, who ranks 23rd among quarterbacks in percentage of his team’s total yards gained, 15 spots lower than Rodgers.

With the higher usage and similar efficiency, Rodgers has been responsible for 943 more yards and five more touchdowns than Romo, and he has four fewer turnovers. Even after prorating Romo’s numbers to include his missed time, he trails Rodgers in all of those categories.

Although Romo leads the NFL in Total QBR, he has been wildly inconsistent throughout the season. He has an NFL-high four games with a Total QBR above 95 but also has three games with a QBR below 20. Romo has not had a single-game QBR between 40 and 60, meaning he generally has been really good or really bad this season.

In comparison, Rodgers has had one game in which he posted a Total QBR below 40. He has had an NFL-high eight games with a QBR of 80 or higher, which all resulted in Packers wins.

Rodgers has a slightly higher average QBR (77.3) than Romo does (73.6) and has had less variance throughout the season.

The Cowboys have had a resurgent season and now have the fifth-best odds to win the Super Bowl. But when looking at NFL MVP based on efficiency, usage and consistency, Rodgers has the statistical edge over Romo entering the final week of the regular season.