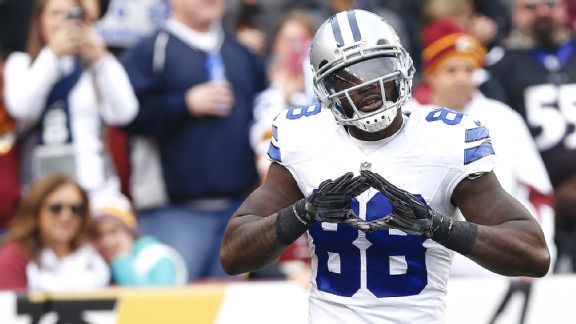 Matchup to watch No. 1

It all starts with the Cowboys’ dominant run game against a stout Lions rush defense, with first down being the key to victory.

Dallas ranked first in yards per rush (4.9) and sixth in yards before contact per rush (3.0) on first down this season. According to the Elias Sports Bureau, the Cowboys’ 1,573 yards rushing on first down is the highest total by a team in a single season since the 1981 Cowboys (1,633). Nine teams, including the Lions, rushed for fewer yards on all downs combined than the Cowboys did on first down alone in 2014.

Overall the Lions allow 0.8 fewer yards per rush and pressure opposing quarterbacks significantly more often with Suh on the field (30 percent of dropbacks vs. 20 percent in 2014).

Matchup to watch No. 2

Sunday’s game features two of the best QB-WR duos in the NFL.

Since the beginning of Dez Bryant’s rookie season in 2010, no QB-WR duo has more touchdowns than Tony Romo and Bryant’s 53. The next closest pair is Matthew Stafford and Calvin Johnson with 47.

Johnson has a history of torching the Cowboys' secondary. In three career games against the Cowboys, Johnson has 26 more targets and 354 more receiving yards than Bryant had in the same games.

Much of that is buoyed by Johnson’s performance in the Lions’ thrilling win over the Cowboys in Week 8 of the 2013 season. Johnson caught 14 passes for 329 yards and a touchdown in that matchup, including six receptions for 134 yards during a fourth-quarter comeback. The performance was 7 yards shy of the NFL record for receiving yards in a single game (336 by Flipper Anderson in 1989).

Despite the huge difference in targets, Bryant has the edge over Johnson in touchdowns when these teams play. Bryant also led the NFL and set a Cowboys single-season franchise record with 16 receiving touchdowns this season.

Romo, the top quarterback in terms of total QBR in 2014, will need to be at his best targeting Bryant against the NFL’s No. 4 QBR defense.

2. The Lions have not won a playoff game since that 1991 divisional game against the Cowboys. They have lost seven straight playoff games, one shy of the longest postseason losing streak in NFL history.

3. Romo is 1-3 as a starter in the postseason. Should the Cowboys lose, Romo’s 1-4 record would be tied for the worst among the 73 quarterbacks to start at least five playoff games since the 1970 merger.

Including the playoffs, Stafford is 0-17 in his career in road games against teams that finished the season over .500. The most recent examples are a 10-point loss to the Green Bay Packers in Week 17 and a 25-point loss to the New England Patriots in Week 12.