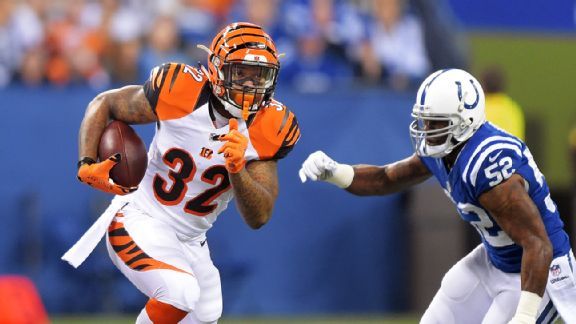 D’Qwell Jackson helped keep Jeremy Hill and the Bengals’ offense in check.The Indianapolis Colts held the Cincinnati Bengals to their worst offensive performance of the season in Week 7, and things weren’t much better for the Bengals in Sunday’s wild-card playoff game. Futility against the Colts’ blitz and abandoning the running game were key elements of the Bengals’ offensive struggles.

Andy Dalton was 3-of-11 for 2 yards passing when the Colts sent at least five pass-rushers, the lowest yardage total against the blitz in his four-year career. He was sacked twice and lost a fumble against the Colts’ blitz.

The Bengals, playing without injured receiver A.J. Green, struggled with anything other than short passes. Dalton was 0-for-9 on passes deeper than 10 yards downfield. Sunday’s game marked the second time in Dalton's career that he didn’t complete a pass deeper than 10 yards downfield. (He was 0-for-4 in Week 7 of 2012 against the Steelers on such passes.)

When targeting wide receivers, Dalton completed 21 percent of his passes (3 of 14) for 31 yards Sunday. Both numbers are the lowest of his career.

The Bengals have scored 10, 13, 10 and 10 points in Dalton's four career playoff games. According to the Elias Sports Bureau, the Bengals’ streak of four games with 13 points or fewer is tied for the longest streak in NFL postseason history.

Dalton’s record in playoff games is 0-4, and he joined Y.A. Tittle in losing four postseason starts at the start of a career. Dalton’s QBR of 20.0 was the second-best of his postseason career behind a 25.1 against the Houston Texans in 2011.

The Bengals ran by design on 10 of 16 plays on their first two drives. Those were their two longest drives of the game and produced their only touchdown, Jeremy Hill’s 1-yard rush. Despite that success, the Bengals rushed by design on eight of their final 43 plays.

With the Colts leading 13-10 at halftime, Indianapolis’ defense forced the Bengals into five consecutive three-and-out possessions. That defense was a springboard to the victory, which advanced the Colts to a divisional playoff against the Denver Broncos.

Luck off to historic postseason start

Colts quarterback Andrew Luck evened his playoff record at 2-2. He had thrown eight interceptions in his first three playoff games, at least one in each game, but he did not throw one against the Bengals.

The victory came with career postseason milestones for Luck, who was 31-of-44 for 376 yards. In his first four postseason games, he has thrown more passes (184) and thrown for more yards (1,438) than any other player. Dan Fouts (182) and Kurt Warner (1,428) had held those distinctions.

The Bengals have lost their past seven playoff games dating to 1990 and are 0-7 all time in road playoff games. Bengals coach Marvin Lewis is 0-6 in his playoff career. Only Jim Mora (0-6) has as many NFL playoff losses without a win.