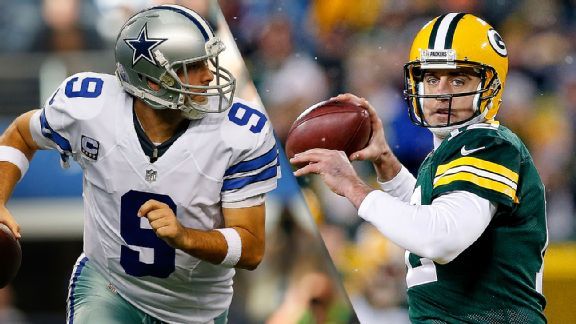 Tony Romo, who is 8-0 on the road this season, visits Aaron Rodgers, who is 8-0 at home.In 1967, the Green Bay Packers defeated the Dallas Cowboys in a playoff game dubbed the Ice Bowl. This Sunday will mark the first time since then that the Cowboys will travel to Green Bay for a playoff game.

The Cowboys have gone 4-2 against the Packers in postseason play, winning the last four meetings. Four of the six winners of a Cowboys-Packers playoff matchup have gone on to win the Super Bowl that year.

Only once since the AFL-NFL merger (1970) has an unbeaten home team hosted an unbeaten road team in the playoffs. That instance was in 1972, when the visiting Dolphins beat the Steelers in Pittsburgh en route to a perfect season.

While the Cowboys have been strong on the road this season, the franchise has lost its last six road playoff games, with the last win coming during the 1992 season. Only the Lions (10), Bengals (seven) and Browns (seven) have longer active losing streaks in road playoff games.

The Packers have been strong at home this season, but the franchise is 3-5 in its last eight home playoff games after starting 13-0. Aaron Rodgers is 1-2 at home in his playoff career and 4-2 on the road or at a neutral site.

The good news for the Cowboys is that one of their turnover problems seems to be solved. DeMarco Murray, who fumbled five times (losing all five) in the first eight games of the season, hasn’t fumbled since Week 8. He has 240 touches since his last game with a fumble, 50 more than any other fumble-less player in that time.

The bad news for Dallas is that the Packers don’t commit turnovers. The Packers tied the Patriots for fewest giveaways (13) this season and led the NFL in turnover margin (plus-14).

At Lambeau, it will probably be even harder for the Cowboys to force a turnover. Including the playoffs, Rodgers hasn’t thrown an interception at home in his last 477 passes. He has played 16 games since his last home interception.

Murray vs. Packers' improved rush defense: Murray led the NFL in rushing this season, and the Cowboys rushed on an NFL-high 52 percent of plays this season.

The Packers’ rush defense started off atrociously this season, allowing 1,228 yards and nine touchdowns in the first eight games of the season.

The Packers allowed 3.7 yards per rush this season with Matthews at inside linebacker (the league average is 4.2 yards per rush). The switch helped the Packers limit opponents to 691 yards and two rushing touchdowns the second half of the season.

Rodgers threw his first career passing touchdown against the Cowboys in Week 13 of the 2007 season. Rodgers was playing in relief of Brett Favre, who was injured in the second quarter of a 37-27 loss to the Cowboys.