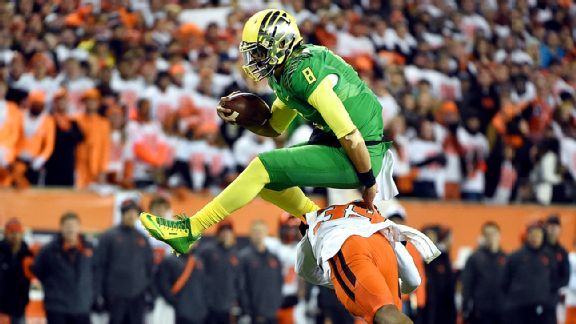 The numbers say Marcus Mariota has had a historically great season.Oregon quarterback Marcus Mariota already has one remarkable performance in the College Football Playoff. And if he has his typical game and leads the Ducks to victory Monday night against Ohio State, a case could be made that his 2014 season will be the best in college football history.

Let’s go by the numbers to break down what Mariota has achieved and what’s at stake in the CFP National Championship Game.

50 – Mariota is on pace to become the first player in FBS history to account for at least 50 more touchdowns than turnovers in one season (56 touchdowns, six turnovers)

10 – If Oregon defeats Ohio State on Monday night, Mariota will be the 10th quarterback in the poll era (since 1936) to win a Heisman Trophy and national title in the same season.

788 – The first-place votes Mariota received for the Heisman Trophy are the third-highest of any player in the history of Heisman voting.

24.9 – Oregon leads the FBS with a +24.9 offensive efficiency this season, meaning the Ducks’ offense contributed almost 25 points per game to the team’s final scoring margin, compared with what an average offense would contribute. That is three points higher than any other FBS team this season.

91.7 – Total QBR is a complete measure of quarterback efficiency, and Mariota is on pace to post the third-highest single-season QBR since 2004. Neither of the two players with higher QBRs won a Heisman or a national championship.

4,852 – Mariota has 4,852 yards of total offense this season. His last three seasons rank in the top four in Oregon history. Mariota’s 4,121 passing yards this season alone would rank second in total offense in school history - behind his 4,380 yards last season.

ESPN’s Football Power Index predicts Oregon with a 63 percent chance of winning the inaugural College Football Playoff. The Ducks will again depend on Mariota’s arm and legs. Will he deliver another memorable performance to cap what might be the greatest season in college football history?