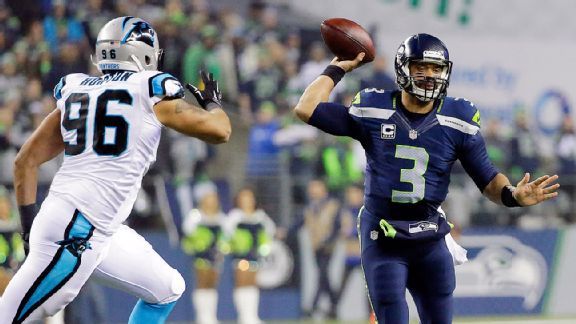 The Seattle Seahawks defended their home turf Saturday to beat the Carolina Panthers in Saturday's NFC divisional playoff game. But a postseason home win for Seattle is nothing new.

The Seahawks improved to 10-2 all-time at home in the postseason, having won their last eight home playoff games. That’s tied with the Redskins for the fourth-longest postseason home win streak in NFL history. With a win in next weekend’s NFC Championship Game, Seattle would equal the 1989-95 Bills for the third-longest streak.

With a victory in the NFC Championship Game, the Seahawks would become the first NFC team to reach back-to-back Super Bowls since the 1996-97 Packers. The Seahawks successfully ended a drought for defending Super Bowl winners, becoming the first such team to win a playoff game the following season since the 2005 Patriots. That season, the Patriots won one playoff game before losing the following week to the Broncos.

Seattle will get to host next week's NFC Championship Game, and since drafting Russell Wilson in 2012, the Seahawks are 25-2 at home (including the postseason). Wilson improved to 5-1 in his postseason career as a starting quarterback with his first career three-touchdown playoff game. During the entire 2013 postseason, Wilson totaled three touchdown passes (over three games).

Wilson especially shined on third down, which wasn’t his strongest area during the regular season.

For the game, the Panthers had more yards, first downs and a greater time of possession than the Seahawks. But the game swung on Seattle forcing three turnovers and committing none.

The key turnover came in the fourth quarter, when Seattle safety Kam Chancellor returned a Cam Newton interception 90 yards for a touchdown. That’s tied for the fifth-longest interception return for a touchdown in NFL postseason history and the longest since James Harrison’s 100-yard return in Pittsburgh’s Super Bowl XLIII win over the Cardinals.